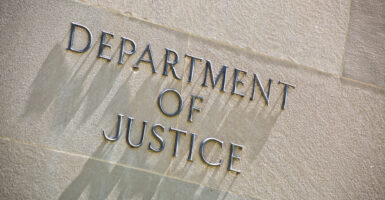 The nation’s largest conservative, Protestant denomination revealed on Friday it is under investigation by the Biden administration over claims of sexual abuse and harassment.

The federal probe by a persistent church critic raised eyebrows, coming amidst a flurry of actions opponents say are intended to punish the president’s political enemies, including an unprecedented FBI raid on former President Donald Trump’s home earlier in the week and the passage of a bill that critics contend will allow rogue IRS agents to target conservative Christian organizations.

The Southern Baptist Convention, which has 13.7 million members in more than 47,000 churches, announced the Justice Department inquiry just months after releasing an independent report on sexual abuse claims.

“The SBC Executive Committee recently became aware that the Department of Justice has initiated an investigation into the Southern Baptist Convention, and that the investigation will include multiple SBC entities,” the executive committee disclosed in a statement released Friday. “Individually and collectively, each SBC entity is resolved to fully and completely cooperate with the investigation.”

The 14 signatories said they “continue to grieve and lament past mistakes,” “recognize our reform efforts are not finished,” and asked for prayer.

The Southern Baptist Convention outsourced a report examining how the executive committee handled sexual abuse reports between 2000 and 2021.

An outside firm, Guidepost Solutions, reported in a 288-page report in May that one member of the Southern Baptist Convention’s executive committee compiled a list of 703 people “suspected of abuse” but never released it publicly. The report records “703 abusers” but notes curiously that only 409 are “believed to be SBC-affiliated at some point in time.”

Days after the report’s release, Guidepost Solutions tweeted its support for Pride Month and the LGBT movement.

The Southern Baptist Convention subsequently printed a list of 205 pages of pastors, church workers, and volunteers “credibly accused” of abuse—a list, it notes, that includes cases that “resulted in an acquittal.”

The report redacted the names and some details of those found innocent, or not accused of sexual impropriety—resulting in some entries with every detail blacked out.

Both the executive committee and Guidepost took pains to point out that, as a voluntary association of independent churches, the Southern Baptist Convention does not ordain or impose church discipline on local pastors.

The report states, due to the Southern Baptists’ congregationalist method of government, “the SBC could not, or should not, take certain actions to address sexual abuse within SBC local churches.” Yet the report induced 44,000 people to sign an online petition, demanding a government investigation.

Both the timing and the method of the DOJ investigation have raised questions among observers.

A former Justice Department official—who asked for his name to be withheld—told The Washington Stand that he finds the DOJ’s wide-ranging investigation into multiple Southern Baptist Convention entities “novel” and “dubious.”

He struggled to identify a federal statute that could be used to target a religious entity for such a capacious investigation. The investigation seems even more unusual because sexual abuse investigations are typically handled by local prosecutors.

“The key question is: What civil or criminal statute is the DOJ using as the predicate for this investigation?” the official noted.

The Biden administration has frequently flouted constitutional authorization in the past, defying the Supreme Court by attempting to continue its eviction moratorium last fall. The Supreme Court stopped the executive action, saying the Centers for Disease Control and Prevention had exceeded its legal authority.

Last November, the Occupational Safety and Health Administration attempted to impose a vaccine mandate on private businesses that employ at least 100 people; the Supreme Court similarly ruled in January that the administration had no legal grounds to impose such a vaccination mandate.

“The DOJ investigation fizzled in 2019. It ended with one arrest—an 82-year-old defrocked priest,” Bill Donohue of the Catholic League for Religious and Civil Rights told The Washington Stand in an exclusive interview.

“One reason the DOJ probe went nowhere is because [Pennsylvania] Attorney General Josh Shapiro (now running for governor) had just finished a witch-hunt grand jury investigation that did nothing to punish any wrongdoers but succeeded in smearing many priests. I sued on behalf of 11 priests who had their reputations damaged and won.”

Unless the Justice Department is time-barred from getting alleged offenders, Donohue told The Washington Stand, “there is no statute of limitations on harassing and intimidating SBC. They are very good at that. Their actions can be costly in terms of legal fees and the reputation/credibility of the SBC leadership.”

The former DOJ official told The Washington Stand that, while he understands many people instinctively support any investigation into the horrors of sexual abuse, it is dangerous to support any investigation uncritically—especially when it involves a Justice Department that has “enormous hostility toward a religious organization like the Southern Baptist Convention.”

“I worry about this kind of thing from this DOJ,” the official told The Washington Stand. “They do not take a fair-minded approach to the law. If it were up to [DOJ leadership], they would mandate Southern Baptist churches perform same-sex marriages or cease to exist.”

The Obama-Biden administration’s solicitor general, Donald Verrilli, admitted during the Supreme Court’s 2015 Obergefell v. Hodges case that the tax-exempt status of religious nonprofits is “certainly going to be an issue” when justices imposed same-sex marriage on all 50 states.

Stripping churches of their tax-exempt status proves more difficult, but the federal government may be seeking alternative means of targeting Christians who uphold traditional, biblical morality.

The Southern Baptist Convention teaches that “marriage is a sacred covenant between one man, one woman, and a holy God, intended for life” and has encouraged states to adopt constitutional marriage protection amendments before Obergefell removed the issue from the voters’ hands.

It is not known whether the Southern Baptist Convention and the Roman Catholic Church’s embrace of natural marriage and gender identity affected either federal investigation.