Lawmakers Must Act as Biden Weaponizes Big Tech Against Americans 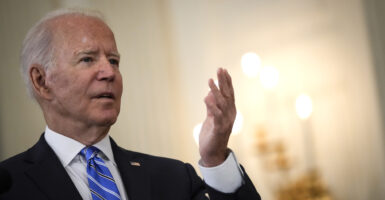 It's clearer than ever that President Joe Biden’s regime is using Big Tech’s totalitarian policies to silence the dissenting opinions of ordinary Americans. Pictured: Biden reiterates his hope that Facebook will better police vaccine "misinformation" during White House remarks July 19 on the economy and COVID-19. (Photo: Drew Angerer/Getty Images)

Missouri Attorney General Eric Schmitt last week exposed the symbiosis of the deep state and the Silicon Valley elites. Schmitt’s revelation came just days after Americans learned that Facebook coordinated with the FBI to suppress the Hunter Biden laptop story a few weeks before the 2020 election.

It is now clearer than ever that President Joe Biden’s regime is actively using the power of Big Tech’s totalitarian policies to silence the dissenting opinions of ordinary Americans.

The past few weeks of whistleblowers and court discovery have revealed evidence of the Biden administration’s deliberate weaponization of the power of Big Tech. It started in July 2021, when then-White House press secretary Jen Psaki disclosed that the Biden administration was working with Facebook to censor “misinformation” related to COVID-19.

Thanks to Schmitt, we now know of more than 45 officials at various agencies and numerous White House staffers who communicate with social media platforms about “misinformation.” (These agencies include the Department of Homeland Security, the Centers for Disease Control and Prevention, the National Institute of Allergy and Infectious Diseases, the Cybersecurity and Infrastructure Security Agency, the Food and Drug Administration, the Office of the Surgeon General, and the Election Assistance Commission.)

While Facebook’s parent company, Meta, has insisted repeatedly that it relies on unbiased fact-checking partners to curtail misinformation, recent discovery from Schmitt’s lawsuit has proved otherwise.

In newly released emails, Facebook employees take direct orders from government officials on which Facebook accounts to act against. This alarming alliance between the liberal bureaucrats in Washington and Meta has resulted in the silencing of conservative voices, and there is no sign of this slowing down.

Coordination between the White House and Big Tech doesn’t stop with Meta. Recently, author and former New York Times reporter Alex Berenson was deplatformed by Twitter after White House officials explicitly requested his removal. After release of the whistleblower report that revealed prevalence of corruption inside Twitter, and considering Twitter’s long history of suppressing dissidents, it is no surprise that Twitter management is willing to take orders from Washington.

These recent stories have provided lawmakers and ordinary Americans alike with hard evidence that this censorship enterprise is a coordinated effort to weaponize Big Tech against the American people.

Under the guise of protecting Americans from “misinformation,” the Biden administration has launched a war against free speech and traditional values. In this ongoing totalitarian crackdown, Biden and his allies in Silicon Valley have weaponized account limitations, suspensions, and deplatforming to silence dissidents and preserve the dying shreds of the ruling class.

Internet platforms’ content moderation policies for misinformation and other buzzwords are thin veils for the seamless collusion between liberal government and social media. Big Tech isn’t depending on “algorithms” or “unbiased third-party fact-checkers” to determine which accounts to suppress.

Instead, social media companies such as Twitter and Facebook work with their handlers in Washington to impose a liberal worldview on America and eliminate criticism of Biden and his allies. Misinformation policies were never anything more than an excuse to silence the enemies of the ruling class.

The unelected bureaucrats in Washington have conquered Silicon Valley and claimed it as their own. What Donald Trump identified as the deep state has now expanded its reach into every facet of our lives.

Although the threat of the Chinese Communist Party’s ideology receives attention, our own civil servants in Washington willfully have accomplished an equally dystopic vision for America. Americans no longer may post their political opinions freely without fear of being deplatformed.

Now it appears that draining the swamp also will require draining Silicon Valley.

After Biden’s divisive speech Thursday night, which served as a declaration of war against more than 70 million “MAGA Republicans,” Americans can be certain that this censorship and aggression toward conservatives will only grow.

The fight for the future of the internet is intertwined with the political battle for our country. As the radical left aggressively tries to consolidate power, the Biden administration will use the internet against ordinary Americans to force us into submission.

However, we can’t continue to depend on podcast interviews and the discovery process in lawsuits as our strategy to fight Big Tech’s tyranny. A defense-oriented approach that depends on tech policy being made by lawsuit is preventing us from achieving any real advances, and is no way to run a country.

Those concerned about the integrity of our republic should seek offensive legislative action from the people’s representatives in Congress and in state legislatures. Only the force of law will be enough to restore integrity to political life online.