Another Leftist Attempt to Rewrite Election Rules Goes Down in Flames 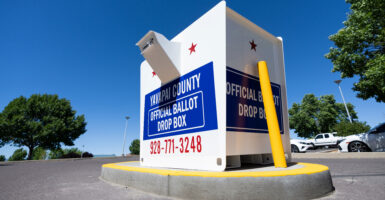 Another left-wing attempt to rewrite election rules has gone down in flames. This time, liberals attempted to put a measure on the November ballot to gut election safeguards and skew voting rules in the influential swing state.

But if the left thought it could buy its way onto the ballot, it was wrong. In its rush to “save democracy,” the group pushing the measure—euphemistically named Arizonans for Free and Fair Elections—failed to follow state law.

That’s why a coalition of groups committed to preserving election integrity came together to challenge that effort in court. On Friday, the Arizona Supreme Court agreed: Proponents did not turn in enough legal signatures to qualify for the ballot.

Key protections for mail ballots would have been eliminated, and vote trafficking by political operatives would have been given the green light. It would even have raised taxes to fund politicians’ campaigns.

The measure took all the worst parts of HR 1, Democrats’ failed legislation to launch a federal takeover of elections, and brought them to Arizona.

Arizonans can rest easier knowing they have avoided an election integrity nightmare, but all Americans should take notice. The left is desperate to stop election reform and to instead impose lax rules on the states. But Democrats in Congress failed to pass their partisan election power grab, and states like Georgia, Texas, and Florida have all enacted commonsense laws in the face of left-wing smear campaigns and corporate boycotts.

States are taking the slack out of elections through stronger voter ID laws, cleaner voter rolls, stiffer penalties for abusive vote trafficking, and greater transparency and accountability in elections.

Ballot measures are one of the few avenues open to advance the left’s goals, and it knows it. Already this year, Missouri saw a massive push to remake the state’s entire election system into a complex scheme known as ranked-choice voting that critics point out adds complexity and risks disenfranchising voters.

And in Michigan, a group called Promote the Vote is pushing, among other things, to permanently enshrine weak voter ID laws and mandate insecure drop boxes that can be used in the dead of night.

So far, these ballot measure fights have come to a quick end in Arizona and Missouri. The fate of the Michigan measure remains undecided. But even if all three fail to qualify, the left will keep trying in more states. There are simply so few other options to advance its agenda—particularly in conservative states.

And when a measure eventually does make the ballot, the campaign to pass it will not be a forthright attack on voting safeguards.

After all, polling plainly shows that laws like photo ID requirements are overwhelmingly popular—especially among black and Hispanic voters. They can’t win on the issues, so progressives will claim they are defending elections even as they sell the public on policies to weaken, undermine, or eliminate all the rules that stop fraud and prevent chaos.

The left will not stop, but neither will we. And as this victory in Arizona proves, those committed to preserving the rule of law and the integrity of our elections are winning the fight to make it easier to vote and harder to cheat.