The Media Bias Fight in Britain 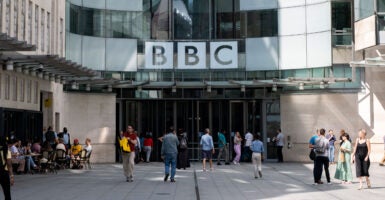 A former "presenter" for the BBC complained that it had slipped into a "both-sides-ism" approach to impartiality that gave a platform to individuals that did not deserve airtime. But isn't airing both sides the definition of being impartial? Pictured: The BBC Broadcasting House at Portland Place in London on Wednesday. (Photo: Mike Kemp/In Pictures/Getty Images)

Whenever conservative media watchdogs aspire to an argument seeking to expose and correct the distortions of the liberal news outlets, they receive the argument of hypocrisy.

“You can’t complain about bias,” they say, “because you’re awfully biased yourself.”

This would be a more impressive argument if one was a mirror image of the media, insisting that the one True Way of Journalism was to sound exactly like a conservative and only issue “news” that favors your side because your side is the staunch defense of “democracy” and “truth.”

Insisting that the media ought to reflect both sides—which actually sounds more like democracy—is despised as a conservative plot.

Take a recent article in The Guardian, a socialist news effort in Britain. Former BBC anchor (aka “presenter”) Emily Maitlis complained in a lecture at a television festival in Edinburgh, Scotland, that BBC board member Robbie Gibb was an “agent of the Conservative Party” who was acting “as the arbiter of BBC impartiality.”

The BBC doesn’t want anyone fussing about impartiality. It needs no outside arbiters. They cook it with a socialist flavor, and the masses should just accept their sermons and not complain about the service of the taxpayer-funded broadcaster.

Gibb was previously a communications director for Conservative former Prime Minister Theresa May, so that accusation sounds legitimate. He was appointed to the BBC Board by Prime Minister Boris Johnson, where he’s now seen as a troublemaker upsetting the Labour Party apple cart.

Exhibit A was Maitlis popping off when she anchored “Newsnight,” attacking Johnson adviser Dominic Cummings for a breach of lockdown protocols during the COVID-19 pandemic in 2020. She lectured that Cummings has “broken the rules” and “the country can see that, and it’s shocked [that] the government cannot.”

Maitlis was upset that after the prime minister’s office complained, the BBC aired a public apology, the recording was taken down, and “there were paparazzi outside my front door.” She complained that the BBC did this “without any kind of due process”—as if this were a court case.

The Guardian summarized that Maitlis’ lament was that the BBC slipped into a “both-sides-ism” approach to impartiality that gave a platform to individuals that did not deserve airtime. But isn’t airing both sides the definition of being impartial?

Maitlis added that during the Brexit referendum, the BBC would “create a false equivalence” by presenting a pro-Brexit economist with an anti-Brexit economist, which was obnoxious because “the overwhelming majority of economists felt Brexit was a bad idea.”

Conservative complaints about media bias were causing anchors to “censor our own interviews” and to fail to defend themselves as “facts are getting lost” and “constitutional norms trashed.”

The left thinks it’s the “democratic norm,” that they act as the bold “truth tellers” who explain nightly that the conservatives are basically the Enemies of the People. The media shouldn’t be “complacent, compliant onlookers,” as Maitlis sees it. They should be the frog leaping out of the boiling water “and phoning all its friends to warn them.”

Allowing two sides would be “normalizing the absurd.”

In other words, journalists believe they are society’s enlightened elites, self-appointed to run governments through their televised wisdom. Anyone who gets in the way with their benighted appeals to “both-sides-ism” is getting in the way of their power to shape minds for “the right side of history.”

They believe only in “my-side-ism.”

Then they conclude that anyone who disagrees with this arrogant arrangement hates democracy—and they wonder why they’re unpopular.