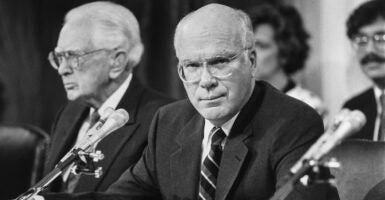 Sen. Patrick Leahy pictured at Clarence Thomas's Senate Judiciary Committee confirmation hearing in 1991. Leahy told the soon-to-be Supreme Court justice: “We have danced around the question of where nominees stand on a women's fundamental right to choose an abortion. This is one of the burning social issues of our time." (Photo: Laura Patterson/CQ Roll Call/Getty Images)

They still serve there today.

But Leahy, who is 82, is not running for reelection this year. Grassley, who turns 89 next month, is.

How Leahy and Grassley handled Thomas’ confirmation process will help define their legacies.

Grassley sought to determine whether Thomas would legislate from the bench or seek to apply the law as intended by the legislature that enacted it.

“In my first question, I hope that you will reaffirm what you said along this line in your confirmation hearings for the Court of Appeals of the D.C. Circuit,” said Grassley.

“Is that something you can reaffirm today, after being on the circuit court of appeals?” Grassley asked.

“Senator,” Thomas responded, “when I spoke those words in my confirmation hearing for the court of appeals, of course, I had not been a judge. But now I can reaffirm those words with the experience of having had to be a judge and having had to judge in some difficult cases.

“I do not believe that there is room in opinions in our work of judging for the personal predilections, the personal opinions and views of judges,” Thomas continued.

In his own opening statement, by contrast, Leahy warned Thomas that he wanted to know how Thomas would legislate from the bench on the issue of abortion.

“Let me make this very clear, Judge Thomas,” said Leahy. “In recent years, we have danced around the question of where nominees stand on a women’s fundamental right to choose an abortion. This is one of the burning social issues of our time. It is the single issue about which this committee and the American people most urgently wish to know the nominees’ views. And yet the Senate and the Nation have been frustrated by polite—albeit respectful—stonewalling.”

When it was Leahy’s turn to question Thomas, he tried to force the judge into taking a position on the constitutionality of Roe v. Wade and abortion.

Referring specifically to Roe, Leahy asked Thomas: “Well, was it properly decided or not?”

“Senator, I think that that is where I just have to say what I have said before; that to comment on the holding in that case would compromise my ability to—.”

Leahy interrupted him. “Let me ask you this: Have you made any decision in your own mind whether you feel Roe v. Wade was properly decided or not, without stating what that decision is?”

“I have not made, Senator, a decision one way or the other with respect to that important decision,” said Thomas.

Thomas was eventually confirmed on a 52 to 48 vote. Leahy was among the 48 who voted no. Grassley voted yes.

This May, a draft opinion in Dobbs v. Jackson Women’s Health Organization was leaked before the Supreme Court was ready to release it. It reviewed a Mississippi law that banned abortion after 15 weeks and showed the court fully overturning Roe and returning the issue of abortion to state legislatures.

Leahy, it would turn out when the final opinion was released, had opposed all five justices who voted to overturn Roe—Thomas, Alito, Gorsuch, Kavanaugh, and Barrett.

On May 11, the Women’s Health Protection Act was brought up on the Senate floor. It would have legalized abortion nationwide. But 60 votes were needed to end debate and hold a final vote.

Leahy, of course, voted for cloture. But only 48 senators joined him. Grassley was not one of them.

Speaking on the floor, Leahy expressed his disgust with the Senate for failing to advance the cause of killing unborn babies.

“I am the dean of the Senate,” declared Leahy. “I am the longest serving Member of this body today.”

While noting that Vermont would keep abortion legal, he declared: “The unfortunate reality is that 26 other States stand ready to ban abortion rights in the absence of Roe. What are the women of these States to do?”

He then—perhaps accidentally—seemed to refer to the unborn human beings that pregnant woman “bear” as “children.”

“And what laws are these States prepared to pass—what resources are they prepared to provide—to support these women and the children they will bear?” Leahy asked.

“Shame on this Senate today,” he said.

No. The shame is on Leahy.

History will remember him for seeking to perpetuate the legalized killing of innocent unborn children.