Canada Is Euthanizing Its Sick and Poor. Welcome to World of Government Health Care. 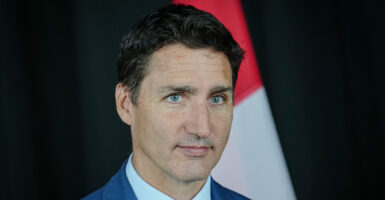 America's neighbor to the north has a problem with health care providers urging their patients to kill themselves. Pictured: Justin Trudeau, prime minister of Canada, waits for the German chancellor in Montreal, Canada, on Aug. 22. (Photo: Kay Nietfeld/picture alliance/ Getty Images)

Many leftists tout Canada’s socialized health care system as something America should emulate, claiming government-run health care is more humane. But it seems Canadian officials are more interested in urging doctors to help patients to kill themselves than to treat them.

America’s neighbor to the north has some of the most permissive euthanasia laws in the world. Canada’s medical assistance in dying laws allow almost anyone who can claim some form of hardship or disability to receive physician-assisted suicide, regardless of how minor those disabilities might be.

In a recently reported horror story from The Associated Press, Alan Nichols, 61, was successfully killed after a quick one month waiting period as he was suffering from hearing loss. Nichols was an otherwise decently healthy guy, but his brother claimed he was railroaded into killing himself.

Nichols’ family said that hospital staff helped him request euthanasia and pushed him to do it, a story that has been repeated many times by other disabled or sick Canadians.

Roger Foley, whose story was also reported by The Associated Press, became so unnerved by his hospital’s health care providers discussing euthanasia as an option that he started to record conversations. Foley has a degenerative brain disorder.

During one reported conversation, the hospital’s director of ethics tried to guilt Foley into thinking about the cost of his hospital stay. The director told Foley it would cost “north of $1,500 a day.”

When Foley asked what long-term treatments were, the director responded, “Roger, this is not my show. My piece of this was to talk to you, [to see] if you had an interest in assisted dying.”

Foley says he had never discussed ending his own life prior to the encounter.

The fact that the ethics director mentioned how much it cost is essential to understanding why Canadian officials seem so hellbent on getting people to kill themselves.

There are a flurry of stories of Canadians choosing to die over living through crushing poverty. The Spectator reported on a woman who chose because she “simply cannot afford to keep on living.”

As the Canadian government pays for health care, it is incentivized to cut costs as much as possible. Based on how eager some hospitals seem to push euthanasia, the government seems to have concluded that it’s cheaper to kill people than to cure them.

That’s ditto for the disabled and mentally ill.

Global News Canada reported that a Canadian military veteran, pursuing treatment for post-traumatic stress disorder and a brain injury, was told, completely unprovoked, that he could receive medical assistance in dying by a Veterans Affairs Canada agent. (Global News did not name the veteran, or the sources for the conversation.)

The man fights for his country, receives injuries in the line of duty, and is told that he can kill himself for his sacrifice. How humane.

While these stories are all disgusting, they lay out perfectly the biggest danger of importing a government-run health care system to the U.S.

When the government decides who gets medical care and when they get care, it also can decide who doesn’t.

With the relatively substandard care that America’s poor and vulnerable get under Medicaid, for example, why would we want to give more power to government bureaucrats over patients’ health care decisions?

Something not often considered in the debate over government health care plays into the country’s current fascination with obliterating gender and sex differences.

Scores of children are being given hormones and treatments that will permanently warp and scar them. What’s to stop some future government-run health care program from destroying a confused child’s body and then encouraging him to kill himself rather than deal with the consequences?

Canada is already beginning to consider allowing so-called mature minors to off themselves if the government determines them competent enough to make the decision.

Dying with Dignity, a pro-euthanasia group, posted a ghoulish blog post on mature minors and medical assistance in dying that urged the government to extend the option to children “at least 12 years of age and capable of making decisions with respect to their health.”

The left already claims children are mature enough to change their sex, so giving 12-year-olds the ability to legally kill themselves seems like the logical next step.

Worse, this push for suicide seems to be having a tangible impact on the number of people taking their own lives.

Canadian federal data shows that 10,064 people died in 2021 by medically-assisted suicide, a massive 32% jump from the year before.

This culture of government-endorsed death cannot be allowed to come to America.

Our costly health care system is far from perfect, but at least it isn’t wholesale encouraging people to end their own lives.