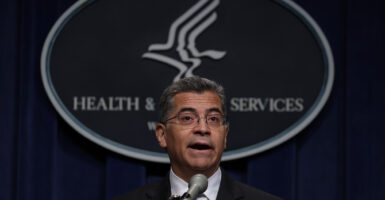 “We want to make sure that Americans are free from discrimination when getting the health care that they need,” Health and Human Services Secretary Xavier Becerra, pictured June 28, says of a rule change that would force insurers to pay for children to have sex-change surgery and force doctors to perform such procedures. (Photo: Alex Wong/Getty Images)

The Department of Health and Human Services announced a new rule Monday that would force insurance providers to pay for breast removal and other transgender surgeries, including for minors.

The proposed rule change by the federal agency concerns Section 1557 of the Affordable Care Act, popularly known as Obamacare, a section of the law that prohibits discrimination in health programs based on race, color, national origin, sex, age, or disability.

In a conference call with reporters, Melanie Fontes Rainer, acting director of the Office for Civil Rights at the Department of Health and Human Services, said that under the proposed changes, the definition of discrimination based on “sex” would be expanded to include gender identity, sexual orientation, and abortion.

Chiquita Brooks-LaSure, administrator for the Centers for Medicare and Medicaid Services, added that the new rules would “promote health equity” and contain provisions for “medically necessary care.”

“This work will help eliminate avoidable differences in health outcomes experienced by those who are underserved and provide the care and support that people need to thrive,” Brooks-LaSure said.

The HHS rule change also would prohibit discrimination based on the revised definition of sex discrimination, as well as require organizations receiving federal funding to implement “civil rights procedures and processes.”

The agency’s description of the proposed rule change is available here on the HHS website.

“This rule will mandate that insurance companies cover the full menu of gender identity interventions such as mastectomies, hysterectomies, breast augmentation, hair removal, and a lifetime of cross-sex hormones, including for minor children,” said Severino, who headed HHS’ Office for Civil Rights during the Trump administration.

“It would also force doctors to perform cross-sex surgeries and to administer puberty blockers to children if they believe such interventions ‘can never be beneficial,’” he said.

Severino referred to Section 92.206 of the rule, in which the Department of Health and Human Services explicitly says that doctors who view such treatments as harmful in all cases must perform them anyway or risk losing federal funding.

This change of the rules “flips medicine on its head,” he argued.

During the phone call with reporters, Health and Human Services Secretary Xavier Becerra said repeatedly that his goal in instituting the rule change was to prevent perceived discrimination in health care.

“We want to make sure that Americans are free from discrimination when getting the health care that they need,” Becerra said, before adding that the rule change would “promote gender and health equity.”

When asked by reporters if the proposed rule changes were in response to an increase in complaints surrounding abortion, Becerra declined to answer.

Becerra noted that the proposed rule change is still subject to public comment before it is finalized.

“We’ll move as quickly as we can,” Becerra said in response to a question on when he hoped the rule change would be put into place. The HHS secretary added that the process would be done “hopefully by next year, if not sooner.”

The Daily Signal sought clarification and additional comment from the Department of Health and Human Services, but did not receive a response in time for publication.

Anyone who wishes to submit comments on the proposed rule change may do so here.