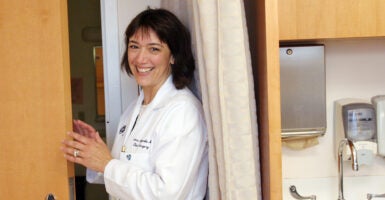 President Joe Biden’s choice to lead the National Cancer Institute received $290.8 million in research funding from pharmaceutical giant Pfizer over her career as an oncologist and scientist, according to data uncovered by The Heritage Foundation’s Oversight Project.

Last week, the White House announced Biden’s appointment of Dr. Monica Bertagnolli to be the first woman to serve as director of the National Cancer Institute. Bertagnolli will be the 16th person to hold the position, which doesn’t require Senate confirmation.

The cancer institute is the largest of the 19 institutes and seven centers that make up the National Institutes of Health. The Biden administration is pushing what it calls a “cancer moonshot” initiative aimed at reducing cancer deaths by 50% over the next 25 years.

Bertagnolli is the Richard E. Wilson professor of surgery in the field of surgical oncology at Harvard Medical School. She is also a surgeon at Boston-based Brigham and Women’s Hospital and a member of the Gastrointestinal Cancer and Sarcoma Disease Centers at Dana-Farber Cancer Institute, also in Boston.

From 2015 through 2021, Bertagnolli received more than 116 grants from Pfizer, totaling $290.8 million. This amount made up 89% of all her research grants, according to Open Payments, a national transparency program under the Center for Medicare & Medicaid Services that collects and publishes information about financial relationships between drug and medical device companies and certain health care providers.

“The funding from Pfizer (and all other industry funding allocated to me) was not in the form of grants to me directly.  This funding was in the form of contracts entered into by the Alliance for Clinical Trials in Oncology,” Bertagnolli told The Daily Signal in an email Tuesday.

The funding was distributed across many different health care institutions—both academic and community—to conduct the trial. Alliance overall does not have more involvement with one industry partner over another—it’s just that this one Pfizer trial was very large and therefore very expensive.

In Pfizer’s second quarter report for 2022, the pharmaceutical company stated that oncology is its third-largest sector, behind investments in vaccines and hospitals. Pfizer reported $3 billion in revenue for oncology in the second quarter and $6 billion in the past six months.

The second-largest source of grants to Bertagnolli was Janssen Research & Development LLC, with 157 grants and a total of $17.4 million.

The White House did not respond to requests for comment from The Daily Signal for this report.

“I look forward to working with Dr. Bertagnolli to advance the president’s call to end cancer as we know it,” Becerra said in a prepared statement. “Dr. Bertagnolli’s decades of cancer research expertise around patient-centered care and her work to create more inclusive clinical trials will be instrumental as we accelerate the rate of research and innovation to fight cancer.”

From 2007 to 2018, she was chief of the surgical oncology division of the Dana-Farber Brigham Cancer Center.

Bertagnolli is the founding chair of the Minimal Common Oncology Data Elements executive committee, an initiative to improve cancer data quality and sharing. She is also a past president and chair of the board of directors of the American Society of Clinical Oncology.

A Wyoming native, she is a graduate of Princeton University and the medical school at the University of Utah.