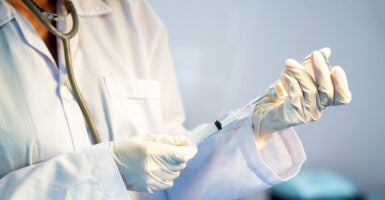 In a nearly 44,000-person trial, only 94 cases of COVID-19 were recorded. Fewer than nine were from those who received two doses of Pfizer’s coronavirus vaccine. (Photo: Cravetiger/Getty Images)

A promising coronavirus vaccine being developed by Pfizer and BioNTech, a German biotechnology firm, was over 90% effective compared to a placebo injection and did not produce any safety concerns, according to an analysis by a third-party data monitoring committee.

“I would say it’s a historical moment,” said Kathrin Jansen, Pfizer’s head of vaccine research and development. “First of all, the world was faced with such a terrible situation, the pandemic, and being able in such a short time to go through what usually takes many years. Hearing that at the interim analysis we are over 90% effective—it was almost stunning to hear,” she told The Washington Post.

In the company’s nearly 44,000-person trial, only 94 cases of COVID-19, the disease caused by the new coronavirus, were recorded. Fewer than nine were from those who received two doses of the vaccine, according to the report.

Though there were no serious safety concerns, some infrequent side effects reported included fatigue, chills, and fever, though they were more common in younger participants, the report said.

Pfizer’s announcement is optimistic news as coronavirus cases surge in many states across the United States. The U.S. passed 10 million confirmed COVID-19 cases Sunday, fueled by consecutive days of over 100,000 new cases, according to a Johns Hopkins University database.

The two companies said that they plan to apply for emergency authorization from the Food and Drug Administration later this month once they complete two months of safety follow-up data and data on their manufacturing process.

The report is especially promising since it far exceeds the FDA’s own regulatory bar, which required a vaccine to be at least 50% effective, according to the Post.

Unlike other pharmaceutical companies, Pfizer did not partner with Operation Warp Speed, the U.S. government’s initiative to fund and develop an effective coronavirus vaccine as soon as possible. Instead, Pfizer spent $2 billion and then signed a $1.95 billion federal contract to provide 100 million doses to Americans, assuming its vaccine proved effective.