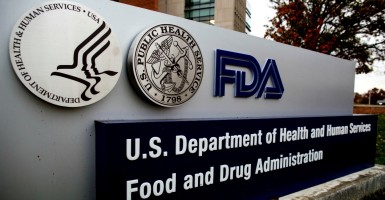 Developing effective treatments for cancer involves a lot more than just the science—it’s economics, too. March 6 marked the one-year anniversary of the Food and Drug Administration (FDA)’s approval of Zarxio, a revolutionary 21st-century medicine used to save cancer patients from lethal infections. Unfortunately, we may be seeing less and less progress on this front in the future. By not pushing to ensure strong intellectual property protection for new non-traditional medications, the Obama administration has made curing cancer and many other diseases more of a strung out “moonshot” than a steadily progressing reality.

The exclusive rights granted to inventors by the intellectual property laws (rights recognized in Article I, Section 8, Clause 8 of the U.S. Constitution) are a key to incentivizing medical innovation.

Zarxio is the U.S.’s first authorized “biosimilar” drug, or a copycat of an already approved “biologic.” Biologics are widely regarded to be the future of medicine, proving effective against a number of today’s incurable diseases. Unlike traditional pharmaceuticals, biologics refer to molecular, combination treatments made within cells themselves. While typical pharmaceuticals are based on a single molecule and are therefore easily identifiable and chemically replicable, biologics are much more complex. Created by cellular processes, biologics are large, intricate, and sometimes impossible to fully characterize.

Biosimilar producers simply take a biologic inventor’s product and manufacture nearly identical copies of it for distribution. This allows them to avoid all the high risks and costs associated with medicinal research and development. The estimated average cost to develop an FDA-approved drug is $1.2 billion.

In the short term, ratcheting down on intellectual property protection and hence reducing profits for pioneer drugs may reduce consumer costs for a few patients. But in the long term, it disincentivizes scientific progress and ultimately reduces access to more effective medicines like biologics for large numbers of future patients.

In 2010, the Biologics Price Competition and Innovation Act (BPCIA) was touted as a feature in the enactment of Obamacare. Developed as part of a joint effort by biologic producers and the government, this provision established a pathway for approving biosimilars while still protecting intellectual property rights. It was pursuant to this act that Zarxio was approved.

Although the Biologics Price Competition and Innovation Act’s biosimilar approval process is now in place, it is shrouded in secrecy. Ignoring requests by biologic producers, the FDA has yet to publicly disclose its final procedure for approving, naming, and determining the interchangeability of biosimilars.

Without clear parameters, biologic producers are doomed to ambiguity, which will reduce their incentive to develop innovative biologics to combat today’s diseases. Market volatility and uncertainty inevitably lead to poor market outcomes. Hence, the lack of clarity that exists under the BPCIA harms Americans each and every day it is not addressed.

While the FDA’s opaque biosimilar policy is certainly harmful, an initiative by President Obama would, if adopted, cause far greater damage. Under the Biologics Price Competition and Innovation Act, biologic producers are granted only four years of data exclusivity and eight additional years of market exclusivity.

This means that after four years, potential producers of biosimilars can have access to the data pertaining to a biologic, giving them ample time to develop a biosimilar and start marketing it after eight more years have elapsed.

In short, the current law enables biosimilars to be market-ready by the end of year 12 of a biologic’s exclusivity period. President Barack Obama recently proposed in his fiscal 2017 budget to cut exclusivity down to seven years. This proposal echoes a 2009 report by the Federal Trade Commission (FTC) which concluded that 12 years of exclusivity is too long and that it reduces innovation in the long-run.

The Federal Trade Commission report relies on shaky economic analysis and has been refuted. Henry Grabowski, a professor at Duke University, found that 12 years of data exclusivity is required to allow firms a reasonable opportunity to recoup their costs.

This means on average 14 years of total exclusivity, since a biologic producer requires a couple of years on average to transform biologic data into a competing biosimilar drug. Another study found that biologic firms usually do not break even for 13 to 16 years. Would you start a business if you knew ahead of time that you wouldn’t break even? Nobody would—including those who would otherwise discover and produce revolutionary cures to diseases.

Fortunately, this can be remedied by providing stronger support for intellectual property rights. Allowing inventors to recoup their costs and reap the rewards of their work will pay huge dividends in the long-term. The math doesn’t lie. Biologic producers need at least 12 years of data exclusivity.

Biosimilars like Zarxio cannot exist without the original biologics on which they’re based. If we want more of these groundbreaking treatments, we need to enable inventors to reap the rewards of their labor. This idea is fundamentally American.

We need smart policy that will steadily allow us to achieve our goal of improving public health. If the FDA really wants to promote new treatments, it should take into account the latest research and quickly promulgate regulations that fully preserve and protect the current 12-year exclusivity period.

Ryan Tactac is a member of the Young Leaders Program at The Heritage Foundation.