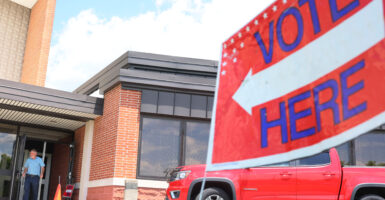 The most narrow margins of the 2020 presidential election in which Joe Biden defeated Donald Trump were in Arizona, Georgia, Pennsylvania, and Wisconsin. Pictured: A voter leaves Lower Dauphin High School during the May 17 primary election in Hummelstown, Pennsylvania. (Photo: Michael M. Santiago/Getty Images)

Voting procedures will be significantly different in the most competitive battleground states in this fall’s midterm elections, compared with some of the controversies of 2020.

Trump challenged the outcomes in these and other states, but subsequent official investigations, specifically in Wisconsin and Arizona, did not conclude that fraud changed the election results.

Here’s a look at what’s different this year in these four states.

Last month, the Wisconsin Supreme Court ruled in the case of Teigen v. Wisconsin Elections Commission that the state acted unlawfully in 2020 when it implemented the use of unattended ballot drop boxes. That’s because no state statute had authorized the practice.

“The Wisconsin Supreme Court’s ruling is about more than drop boxes,” J. Christian Adams, president of the Public Interest Legal Foundation, a watchdog group, told The Daily Signal. “The Supreme Court opinion says officials can’t break the law in the middle of an election season without consequences.”

The consequences would be litigation.

Adams stressed that it would be a mistake to argue that the use of drop boxes flipped the results of the 2020 election in Wisconsin, or that any of the election reforms passed in 19 states in 2021 would change the results of an election.

“That’s assuming that without a drop box the same people wouldn’t have found another way to vote,” Adams said.

In 2021, a total of 19 states—Arizona and Georgia among them —passed election reforms, as did several more in 2022.

Most expanded voter ID to include mail-in balloting; limited ballot harvesting, which allows political operatives to distribute and collect large sums of absentee ballots; and clean registration rolls of the names of deceased voters or those who have moved from the state or local jurisdiction.

2. Pennsylvania: A Ban on ‘Zuckerbucks’

The change was a response to the donation of about $400 million for local election administration from Facebook founder and CEO Mark Zuckerberg and his wife Priscilla Chan, a spending binge that many critics called “Zuckerbucks” or just “Zuck Bucks.”

The ban on such outside contributions was part of a deal that increased Pennsylvania state funding for counties to use for election administration.

“Election administration is the one part of elections that is supposed to be nonpartisan,” Stewart Whitson, legal director for the Foundation for Government Accountability, a watchdog group, told The Daily Signal.

Since 2020, a total of 24 states enacted bans on using private money to fund election administration.

In 2020, Zuckerberg-financed grants went to 23 Pennsylvania counties and the Pennsylvania Department of State, which oversees elections, for a combined total of about $20 million.

“Republicans in the Legislature kept passing election integrity legislation and the governor would veto it,” said Hans von Spakovsky, manager of the Election Law Reform Initiative at The Heritage Foundation, parent organization of The Daily Signal. “The Legislature did score success in this case, banning private funding for elections.”

The Zuckerberg money was distributed by the liberal nonprofit Center for Tech and Civic Life, which also gave $5 million to Arizona, $45 million to Georgia, and $8 million to Wisconsin.

Of these four battleground states, only Wisconsin didn’t enact a ban on Zuckerbucks or other private money to pay for elections.

The Republican-controlled Wisconsin House of Representatives appointed Michael Gableman, a former state Supreme Court justice, to be special counsel for the investigation. Gableman determined that use of private, outside funds constituted an improper get-out-the-vote effort.

One new Arizona law requires that the secretary of state compare death records with a statewide voter registration database to root out invalid voters. Another state law enhances the security of voting machines.

A third new law in Arizona stipulates removal of the names of inactive voters from an early-voting list if they have not voted in two consecutive election cycles. And a fourth law requires voters to sign the envelope in which they submit an absentee ballot.

Arizona’s ban on ballot harvesting, which predated the 2021 election reforms, was upheld by the U.S. Supreme Court in the case known as Brnovich v. Democratic National Committee.

The law also establishes guidelines for ballot drop boxes, aims to shorten lines at polling places, and gives the State Elections Board more oversight of election administration by the counties.

In one of its more controversial aspects, the Georgia measure prohibits political operatives from offering food, bottled water, or anything of value within 150 feet of a polling place. Only New York and Montana have similar provisions on offering food and water in voting lines.

Many state lawmakers adopted the phrase “Easy to vote, hard to cheat” to describe the legislation.

Public Interest Legal Foundation’s Adams, however, said the new reforms in Georgia would “barely” make it more difficult to cheat in elections. But, he said, the reforms would help restore confidence in elections.

“It will be harder for third parties to coerce people in their kitchens in Georgia and Arizona,” Adams said of state laws to curb ballot harvesting.

“The trend is in the right direction,” he said. “But it is not a big leap.”