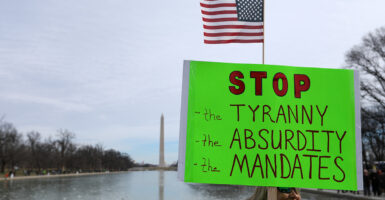 Washington’s failed response to the COVID-19 pandemic highlights the need for policy that balances the protection of public health with the need to preserve personal freedom. Pictured: A protester carries a banner in Washington, D.C., Jan. 23 to protest against vaccine mandates. (Photo: Yasin Ozturk/Getty Images)

The COVID-19 crisis offered excellent lessons in the advantages of federalism, the division of power between the federal government and the states.

Most COVID-19 policies directly affecting Americans were made and enforced, not by Washington, but by state and local officials. Federalism enables citizens to hold these officials directly accountable for what they did or failed to do in responding to the pandemic.

Liberal academics and policy analysts argued that federalism actually hampered an effective response. According to them, it resulted in fragmented and inconsistent policies, noncompliance with federal recommendations, inefficient utilization of resources, a worsening of social and economic inequities, and unequal medical outcomes, especially for minorities.

Of course, the alternative to federalism would be a concentration of control in Washington.

Critics on the left assert that a single point of decision-making would develop and enforce a coherent national policy applicable to every state and locality. In practice, however, such unitary governance would guarantee failure on the ground.

Some states were more successful than others. But one thing is indisputable: Washington failed. The biggest failures in America’s response to the pandemic, detailed by the Government Accountability Office and others, were the failures of federal officials.

This list includes: a failure to effectively coordinate a full federal response to the pandemic using the powers legally available to the national government; the deadly delay in developing and deploying effective diagnostic testing; the inability to provide complete and consistent data to the states and the public; their neglect of the National Strategic Stockpile and the shortages of medical equipment and supplies; the confusing messaging on masks and mask mandates; the attempts to impose an unwise and illegal federal vaccine mandate on the private sector, while downplaying the vital role of natural immunity; the fumbled production and distribution of anti-viral therapeutics; the insistence on recommending educationally and emotionally damaging lockdowns that created even more health problems; the anti-intellectual response to legitimate scientific dissent; and the continuing failure to identify the origin and development of the coronavirus.

In December 2021, President Joe Biden got it right when he said: “There is no federal solution. This gets solved at the state level.” This is correct, both as a matter of constitutional law and as a practical matter. The states, not the feds, can exercise plenary police powers to protect public health and safety.

As North Carolina University professor Thomas Birkland and his colleagues observe, “The very foundation of federal emergency policy in general is the idea that state and local governments are best positioned to respond to emergencies.”

As Heritage Foundation analysts predicted, success in combating the coronavirus was determined by the effectiveness of public health measures on the ground—in states, counties, and localities. (The Daily Signal is the news outlet of The Heritage Foundation.)

Policymakers would and should respond differently to the often radically differing local and state conditions.

This diversity of policy, reflecting genuine philosophical differences and the democratic diversity of the nation, is a feature, not a flaw, of the Founders’ federalist design. In his “American Commonwealth” (1888), British political scientist Lord James Bryce observed:

Federalism enables a people to try experiments in legislation and administration which could not be safely tried in a large, centralized country. A comparatively small commonwealth like an American State easily makes and unmakes its laws; mistakes are not serious, for they are soon corrected; other States profit by the experience of a law or a method which has worked well or ill in the State that has tried it.

The key COVID-19 metrics were caseloads, hospitalizations, and deaths. Initial comparative mortality data in 2021 did not show a clear “red state versus blue state” pattern.

Unfortunately, the politicization of the pandemic mirrored the contagion of the virus itself, spreading rapidly from politicians to academia.

Writing in the British Medical Journal, for example, researchers published a methodologically flawed study that associated county mortality with Republican voting patterns. In fact, rural counties often do vote Republican, but, as Birx told Congress, rural America is older, with more comorbidities, and had higher death rates “long before” the COVID-19 pandemic.

Viral infections and mortality rates are affected by numerous factors beyond public health policy. Factors such as demographics, urbanization, and population density vary greatly from region to region, state to state, and locality to locality—and they can make a huge difference.

For example, a comprehensive report for the National Bureau of Economic Research concluded that COVID-19 mortality risk is mostly age-related; for those aged 85 and over, the risk was nearly 9,000 times higher than those aged 5-17.

Or consider the experience of America’s four largest states. Adjusted for age, the National Bureau of Economic Research researchers found that California had a COVID-19 death rate of 256.1 per 100,000 and Florida’s rate was 265.1. Mortality rates were significantly higher for New York (346.3) and Texas (390.2).

Measuring the impact of state policies on total mortality is indeed a good way to evaluate the policy responses of state and local authorities. It accounts for the broader effects of pandemic lockdown policies on health and mortality, such as the impact of delayed routine medical care, the deleterious effects of isolation on mental health and suicide, and higher drug- and alcohol-related deaths.

Considering these crucial and competing needs, a prudential policy would seek to balance the protection of public health with the need to preserve personal freedom and individuals’ livelihoods.

Once again, California, Texas, Florida, and New York provide an excellent template for policy analysis since they represent large and diverse populations and the largest number of COVID-19 cases.

How did the approach of a “balanced” policy fare? Since the onset of the pandemic, California and New York adhered more closely to guidance from Washington (particularly Centers for Disease Control and Prevention guidance), while Florida and Texas pursued more independent courses of action. In measuring the economic impact of the pandemic, Phil Kerpen, Casey Mulligan, and Stephen Moore showed that these four states, with varying policies, secured very different results.

Despite high COVID-19 caseloads, Florida and Texas performed well in mitigating the damaging economic effects of the pandemic.

Florida achieved an unemployment measure of 2.1%, in contrast to New York’s rate of 5.6%. California’s peak unemployment rate reached 10.2%, while Texas capped unemployment at 7.7%. Florida and Texas took steps to curb the decline in their gross domestic product. New York, on the other hand, experienced the highest increase in unemployment and the deepest decline in GDP among the four largest states.

With few and rare exceptions, children generally were never vulnerable to severe illness, hospitalization, or death from COVID-19. Nonetheless, many states and localities closed schools for extended periods of time or imposed severe restrictions on in-person education. The multiple costs of lost learning are no longer debatable, and the public officials responsible should be held accountable.

Once again, among the four largest states, lost in-person learning for children was significantly greater in California and New York than Texas or Florida.

Congress should initiate serious oversight hearings to assess the performance of the various federal agencies, including the Centers for Disease Control and Prevention and the National Institutes of Health. But equally important, state lawmakers should take a good look at how well they and their public health agencies performed.

Federalism expands democratic freedom and accountability. Citizens should take advantage of it. The data are mounting. Let’s use this information to learn from this experience and to hold elected officials—at all levels of government—accountable.