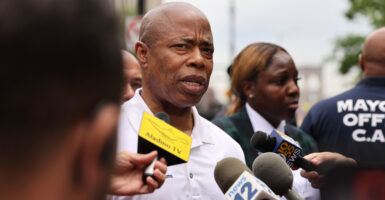 Many small border towns see hundreds of illegal immigrants show up every day for months on end, but the mayors of New York and the District of Columbia apparently are completely overwhelmed after just a few thousand migrants arrive on buses from the border. Pictured: New York City Mayor Eric Adams joins a June 11 march across the Brooklyn Bridge to protest gun violence. (Photo: Spencer Platt/Getty Images)

The border has come to northern, blue cities—and Democrats aren’t handling it well.

July’s border numbers are in, and the Biden administration again has set an all-time record for unlawful crossings, surpassing 2021’s historic numbers.

Most legacy and corporate media dodged this historic crisis, which began almost immediately under President Joe Biden’s watch. It’s typically easy for the Acela corridor simply to ignore the plight of border states.

But red state governors, namely Greg Abbott of Texas and Doug Ducey of Arizona, have changed the dynamic by busing some of the countless border crossers directly to Washington, D.C., and New York City.

Now, the big, blue city mayors are having a fit and accusing Republicans of causing the mess.

“This is horrific, when you think about what the governor is doing,” New York City Mayor Eric Adams, a Democrat, said of Abbott while greeting bused-in migrants at the Port Authority bus terminal.

Texas and Arizona have sent about 4,000 asylum-seekers to New York since May, Politico reported.

D.C. Mayor Muriel Bowser, a Democrat, actually requested mobilization of the National Guard to deal with the asylum-seekers being sent to her city.

Such a request likely would be called “racist” or “fascist” by left-wing media types if it came from a Republican mayor. Amusingly enough, the Biden administration rejected Bowser’s request.

The D.C. mayor’s response to the administration’s decision amounted to mild grumbling.

Tellingly, Adams and Bowser have said almost nothing about the Biden administration’s immigration and border policies in general. They are operating as if the federal response to the border crisis isn’t an issue, even though by most measures enforcement of border security is primarily the responsibility of the federal government.

Not only has the Biden administration done little to nothing to address the border surge—besides laughingly telling us that the border is “secure” over and over again—it actively is making the challenge worse.

The administration has been in an ongoing legal battle to rescind Title 42, a health policy that allows the federal government to deport illegal immigrants quickly during a pandemic. One would think this policy should remain in place as long as Biden wears a mask at public events, right?

The government’s “Remain in Mexico” policy was one of the few things constraining the flood of illegal immigrants coming across our southern border. The policy—which began under President Donald Trump—makes asylum-seekers remain in Mexico while their asylum requests are decided.

Naturally, the Biden administration has been ignoring Remain in Mexico and officially will get rid of the policy soon.

Biden also effectively restored President Barack Obama’s “catch and release” policies. So, not only are asylum-seekers immediately allowed into the country, but most illegal immigrants get the green light to enter whether they are caught or not.

On the border, the Biden administration essentially is taking the role of a rogue prosecutor, encouraging more illegal immigration and undermining the rule of law.

Biden and company have demonstrated that ultimately they are more committed to placating left-wing activists than uniting the country or keeping the border secure. That’s put blue city mayors in the lurch.

Apparently, New York and the District of Columbia are completely overwhelmed after just a few thousand migrants have been bused in from the border.

New York has over 8 million people. It’s one of the great cities of the world. Just imagine for a moment how McAllen, Texas—a city of under 150,000—deals with the tens of thousands of illegal immigrants who show up every month. Many border towns see hundreds of migrants show up every day for months on end.

New York’s mayor melted down when 68 migrants showed up in the Big Apple one weekend at the beginning of August.

When you think about this country, a country that has always been open to those who were fleeing persecution and other intolerable conditions, we’ve always welcomed that. And this governor is not doing that in Texas, but we are going to set the right message, the right tone, of being here for these families.

It seems Adams and Bowser should be happy with the situation, instead of calling for the National Guard to bail them out. Isn’t it a good thing that these illegal immigrants are sent straight to the District of Columbia and to New York—cities that are covered in signs saying, “All are welcome, no exceptions”— instead of a mean state like Arizona or Texas?

Texas gave these cities some of the tired, huddled masses yearning to breathe free, but for some odd reason, New York’s mayor isn’t celebrating.

As Biden deconstructs border security and a historic wave of illegal immigration becomes increasingly more historic, the president’s blue city allies are left with little option other than to blame Republicans shamelessly and rather pathetically for the mess.

Although this doesn’t exactly solve the border issue, it at least draws attention to the actual problem.

Some Democrats even acknowledge that busing migrants to New York and the District has been an effective strategy for border state Republicans to push the issue into the news.

“The governor of Texas, Greg Abbott, has come up with … one of the most brilliant political strategies I’ve heard in a long time,” former New Jersey Gov. David Paterson, a Democrat, said in a recent radio interview.

Paterson explained that Adams can do little to stop the flow of migrants other than to expose the failures of Democrats’ immigration policies.

“It has put New York’s Mayor Eric Adams in the position where he can’t say he won’t accept the immigrants,” Paterson said, adding:

That would be going against what has been the policy most Democrats have on immigration in the first place. And if [Adams] sends the immigrants back to Texas, he is … going against his own attempt to get the federal government to help pay for the fact that they are here.

Now, it certainly would be better if the Biden administration weren’t busing and releasing migrants around the country and we weren’t dealing with a serious and overwhelming border surge.

But responsibility for this now unprecedented challenge is in the court of the man in the White House and the officials of his administration, who have done everything to make border enforcement impossible.

Maybe the mayors of New York and Washington should begin acknowledging that and pressuring their Biden administration allies to do something rather than whine about how unfair it is that Republicans are dumping the border mess back in their laps.