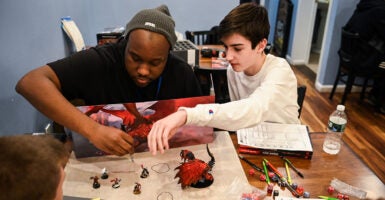 Before embarking on a quest, all good Dungeons and Dragons players know they have to check their privilege. After all, isn’t it fun to inject radical identity politics into your fantasy game?

That seems to be the idea behind “Journeys Through the Radiant Citadel,” a set of new Dungeons and Dragons adventures that take place in the titular location. It has a hyperfocus on race.

USA Today released a fawning article about the new narratives with adventures “shaped by the lived experiences of the most diverse group of writers ever assembled by [the company that makes Dungeons and Dragons] Wizards of the Coast.”

Are the stories and adventures any good? Who knows and who cares! They were written by minorities and that’s all that matters.

Diversity and Dragons anyone?

What makes “Radiant Citadel” so much stranger is that it flies in the face of both the old rules of the radical left and the spirit of Dungeons and Dragons as a whole.

The left constantly crows about cultural appropriation and pushes for a form of neo-segregation. Whites are told to stay in their lane and avoid anything that could be perceived as adopting parts of minority culture.

It’s ridiculous to lock certain cultures away and only make them accessible based on the color of your skin, but “Radiant Citadel” is nothing but stories by minorities about minority cultures.

The radical left can’t have it both ways. Either it’s OK for white people to adapt and use these stories as part of their games or not. Seeing as “Radiant Citadel” is on sale for the general public, it seems Wizards of the Coast prefers the former.

Frankly, the whole discussion around race and cultural appropriation in Dungeons and Dragons rings a little hollow as the game is, at its core, essentially making up a story.

Which is why this sycophantic praise for “Radiant Citadel” is just so strange. Minority Dungeons and Dragons players didn’t need the new guide to have minority characters in their stories. They could just create them.

The issue with “Radiant Citadel” isn’t that it fundamentally changes Dungeons and Dragons, it’s that it challenges the nature of what the game should be.

Previously, Dungeons and Dragons was whatever you wanted it to be about. Want to fight the dragon, save the princess, and rule the kingdom? Knock yourself out.

But now, radical leftist activists want to inject the same woke and racist nonsense into the game that infects everything else these days, and it will spoil the very spirit of what makes the game so unique.

That princess better be black or you’re a racist. Or maybe she shouldn’t be black because then that’s appropriating black culture. Whichever way it is, it has no place in the world of Dungeons and Dragons.

If “Radiant Citadel” was advertised as a series of new and unique adventures that Dungeons and Dragons players could all enjoy together, that’s one thing. But predictably, the left has instead decided to use the stories to fetishize minorities as special and amazing based only on their melanin.

Ironically, black authors have created memorable and fun Dungeons and Dragons adventures in the past without having to resort to their skin tone as a selling point.

Mike Pondsmith was a game designer back in the 1980s and 1990s who contributed a slew of content for Dungeons and Dragons. He’s also black.

And in a hilarious reinforcement of just how much the left hates when people mix cultures, Pondsmith helped create the popular “Oriental Adventures” set of stories back in 1985.

“Oriental Adventures” was an attempt to give players a new setting based on Asia to play in, but came under fire by woke leftists in 2020 and now features a disclaimer warning players that the content might be racist.

So now exploring other cultures is racist, again. Got it.

The world at large is too full of identity politics to add another victim to the pile. “Radiant Citadel” looks to be full of the same racist nonsense the left peddles everywhere else.

The scariest monster in Dungeons and Dragons should probably be a dragon, not a crazed leftist.