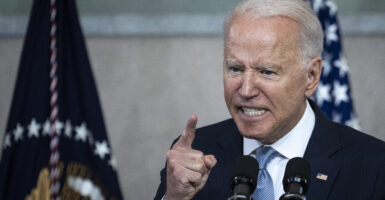 The Biden administration’s Justice Department successfully prosecuted election fraud cases last month in Pennsylvania and Louisiana, even as the president has spent much of his term so far asserting that voter fraud is a myth.

At the same time, though, Biden ratcheted up rhetoric against state reforms aimed at preventing voter fraud.

Late last year, the White House issued a press release touting plans to “restore and strengthen American democracy” and improve “voting rights.” Part of that effort by the Biden administration included “combating misinformation and disinformation” that could “sow mistrust” in elections.

The president, referring to the contested 2020 election in which he defeated incumbent Donald Trump, criticized those who were “sowing doubt [and] inventing charges of fraud.”

During his State of the Union address in March, Biden again ripped Republicans’ state legislation to prevent voter fraud, saying: “In state after state, new laws have been passed, not only to suppress the vote, but to subvert entire elections. We cannot let this happen.”

In July 2021, during a speech in Philadelphia, Biden said the “denial of full and free and fair elections is the most un-American thing that any of us can imagine.”

In August 2021, senior Biden White House officials issued a report criticizing state proposals for election reforms and argued: “An often-cited reason for these bills and laws is voter fraud, yet voter fraud is extremely rare.”

Last month, two former officials in Amite, Louisiana, pleaded guilty as federal prosecutors pursued their roles in a conspiracy to pay or offer to pay voters for casting ballots in a federal election.

Court documents said former Amite Police Chief Jerry Trabona, 72, and former Amite City Council member Kristian Hart, 49, paid voters in Tangipahoa Parish to vote in open primary and general elections in 2016 in which they were candidates, according to a Justice Department announcement.

Trabona and Hart admitted that they agreed to pay voters during the contests, prosecutors said. Because federal candidates appeared on the same ballot, the matter gained the stature of a federal case.

The former police chief and former council member are scheduled to be sentenced Nov. 1. They face up to five years in prison on each of the three counts.

“We must have fair elections, free from the taint of corruption, to ensure a fully functional government,” U.S. Attorney Duane A. Evans, who oversees the Eastern District of Louisiana, said in a formal statement.

“Voting is the cornerstone of our democracy. If even one vote has been illegally cast or if the integrity of just one election official is compromised, it diminishes faith in [the] process,” U.S. Attorney Jennifer Arbittier Williams announced.

“Votes are not things to be purchased and democracy is not for sale,” Williams said. “If you are a political consultant, election official, or work with the polling places in any way, I urge you to do your job honestly and faithfully.”

Myers, a Democrat, represented Pennsylvania’s 1st Congressional District for two terms in the late 1970s, but resigned in disgrace in 1980 as part of the broad “Abscam” bribery scandal.

Myers was convicted and sentenced to federal prison. After his release in 1985, he became a political consultant.

The former congressman admitted to coordinating plots to fraudulently stuff ballot boxes for specific Democratic candidates in Pennsylvania elections in 2014, 2015, 2016, 2017, and 2018.

Myers’ guilty plea came after several others in the conspiracy pleaded guilty last year. The investigation began in 2020 under the Trump administration’s Justice Department and continued during the Biden administration.

Myers admitted in court to bribing Domenick J. DeMuro, a judge of elections for the 39th Ward, 36th Division, in South Philadelphia. Judge of elections is a title held by some election workers in the city.

Some of these candidates were running for judicial office and their campaigns had hired Myers. Others were his favored candidates for federal, state, or local offices.

Myers solicited “consulting fees” from his clients, then used portions of these funds to pay DeMuro and others to tamper with election results, prosecutors said.

The payments from Meyers ranged from $300 to $5,000 per election. According to the Justice Department, DeMuro added fraudulent votes on a voting machine, also known as “ringing up” votes, for Myers’ clients and preferred candidates,

Myers also admitted to conspiring to commit election fraud with Marie Beren, a former judge of elections for the 39th Ward, 2nd Division, in South Philadelphia.

Beren pleaded guilty in October 2021. Myers admitted to giving Beren directions to add votes to his preferred candidates. Myers said that, on almost every Election Day, he drove Beren to a polling station to open up. During the drive, he advised Beren which candidates he was supporting, so that she knew which ones should get fraudulent votes.

Beren also would advise in-person voters to support and cast fraudulent votes for Myers’ preferred candidates on behalf of voters whom she knew would not or did not show up to vote.

On a given Election Day, federal prosecutors said, Myers would talk to Beren by cell phone while she was at the polling station about the number of votes cast for his preferred candidates. She would report to Myers.

Prosecutors said that Beren and her accomplices from the Philadelphia Board of Elections would falsify polling books as well as the List of Voters and Party Enrollment for the 39th Ward, 2nd Division, by recording the names, party affiliation, and order of appearance for voters who actually had not showed up at the polling station to cast a ballot.

In March, a federal judge sentenced Joseph John Marak, of Surprise, Arizona, to 30 months of supervised probation and fined him $2,400 for making a false voter registration application, a felony offense.

In January, Marak pleaded guilty to submitting a voter registration application and falsely certified the statement, “I am not a convicted felon.”

In August 2011, Marak was convicted of 18 felony counts in U.S. District Court of the Eastern District of North Carolina for crimes unrelated to voter fraud charges in Arizona. He was sentenced to 72 months in prison for the North Carolina felonies.

Based on the fraudulent registration, prosecutors said, Marak voted in elections from 2015 through 2020.

“If you wish to vote in Arizona following a felony conviction, please speak first with your local County Recorder to fully understand the process for restoring your voting rights,” U.S. Attorney Gary Restaino, of the District of Arizona, said in a written statement.

“This is the second voter fraud case we’ve charged in the last year, and the first arising out of the 2020 election cycle,” Restaino said.

In February, a federal judge sentenced Marcia Johnson, 70, of Lake Havasu City, Arizona, to one year of supervised probation and fined her $1,000. Johnson pleaded guilty to one count of voting more than once, a felony.

Federal prosecutors said the two Iranian nationals also sent threatening email messages to intimidate and interfere with voters; created and disseminated a video containing disinformation about purported vulnerabilities in election infrastructure; and attempted to access, without authorization, the voting-related websites of several states.

Prosecutors also alleged that Kazemi and Kashian successfully gained unauthorized access to a U.S. media company’s computer network. If not for successful FBI and company efforts to mitigate the threat, prosecutors said, the pair would have used the media outlet to promote false claims after the election.

“As alleged, Kazemi and Kashian were part of a coordinated conspiracy in which Iranian hackers sought to undermine faith and confidence in the U.S. presidential election,” U.S. Attorney Damian Williams, of the Southern District of New York, said in a formal statement, adding:

Working with others, Kazemi and Kashian accessed voter information from at least one state’s voter database, threatened U.S. voters via email, and even disseminated a fictitious video that purported to depict actors fabricating overseas ballots.

In September and October 2020, the Justice Department said, the two indicted Iranian nationals and other conspirators attempted to compromise 11 state election websites, including those providing voter registration and information services. The Iranians downloaded information on about 100,000 separate voters.

Claiming to be members of the right-wing militant group known as the Proud Boys, prosecutors said, members of the conspiracy sent false Facebook messages and emails to congressional Republicans and others associated with Trump’s 2020 campaign, as well as to journalists.

In November, a federal grand jury in Raleigh charged a North Carolina man with passport fraud, voting as a noncitizen, and falsely claiming to be a U.S. citizen in order to register to vote.

Federal prosecutors said that Garbant Piquant, 53, a resident of Garner, North Carolina, used a false Virginia birth certificate as proof that he was a native-born citizen.

Prosecutors said he voted in Wake County, North Carolina, primary and general elections from 2018 through 2020.

In June, a city council member in Troy, New York, pleaded guilty to casting absentee ballots in two other people’s names. She resigned from the council as part of a plea agreement with federal prosecutors.

Kimberly Ashe-McPherson successfully ran for reelection to the Troy City Council in 2021, first in the primary and then in the general election.

In her guilty plea, Ashe-McPherson, 61, admitted that in the primary election, she voted by absentee ballot in the name of another person.

In the general election, she admitted, she voted by absentee ballot in the names of two others.

The first subheadline of this report was corrected shorty after publication to reflect the words used in a White House publication.

Have an opinion about this article? To sound off, please email letters@breannakoskiom and we’ll consider publishing your edited remarks in our regular “We Hear You” feature. Remember to include the url or headline of the article plus your name and town and/or state.