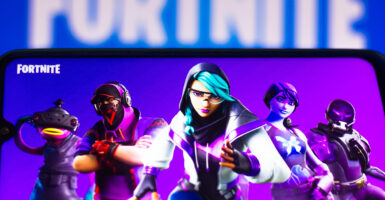 While many are rightfully concerned about the growing influence of video-based social media platform TikTok and the Chinese government’s ability to harvest incredible amounts of user data from it, China’s largest social media and video game studio, Tencent, has quietly been acquiring a commanding stake in the most popular video game companies around the world, and no one has seemed to notice.

From Riot Games’ flagship title Valorant to the popular Epic Games-produced Fortnite, Tencent and the Chinese Communist Party are inserting propaganda and influencing a generation of children around the world while their parents aren’t looking.

Last week, Tencent announced that it aims to acquire a greater stake in the French studio Ubisoft, which is behind popular titles such as Assassin’s Creed and Rainbow Six Siege.

In 2018, Tencent acquired 5% of the studio and subsequently began to exert its influence over the company. For example, in 2021, Ubisoft made visual changes to certain games so it could sell them in China. Changes included eliminating gambling symbolism and skulls from playable environments. The company was forced to roll back those changes, however, after players in North America and Europe promised never to play the game again if the changes remained.

While the China-friendly changes to some titles were reversed after fans expressed outrage, it is evident that game studios are increasingly worried about pleasing Tencent and the Chinese Communist Party. With this in mind, Tencent’s quest to become Ubisoft’s largest private shareholder should not be taken lightly.

During the coronavirus pandemic, Ubisoft released numerous history games and online experiences for children who were forced to learn at home. As many gamers have noted, titles such as Assassin’s Creed possess a remarkable amount of educational value with their accurate modeling of historic cities and monuments. And with the deteriorating quality of our education system, it should be no surprise that kids and parents are turning to video games to help aid in learning.

As Ubisoft continues to improve upon these history games and educational experiences, the ability of the Chinese Communist Party to influence and shape these foundational narratives presents a direct threat to kids around the world.

Concerns of weaponizing the narrative stories of video games into propaganda only scratch the surface of Tencent’s active campaign to conquer your home.

In 2020, the online community highlighted the spyware-like anti-cheat software used in Valorant. The so-called anti-cheat software would launch upon starting your computer—regardless of whether the user opened the game or not—and would monitor all user activity, logging which programs were used. This software broke from the industry standard and was viewed as intrusion into the user’s privacy.

While Riot Games quickly denied the allegations and changed the design of its software, many remained unconvinced. After all, this is the same company that hid a data breach of millions of accounts from its users. Even more alarming, in March of 2019, it was revealed that over 300 million user messages sent on Tencent platforms and games were stored on a database used by the Chinese Police.

Tencent has established itself as a critical tool of the Chinese Communist Party. The video game company has used its games to spy on Americans and used its digital content to propagandize our children. It has preyed upon the lack of technological literacy of parents across the country, placing their data privacy and their kids in direct jeopardy.

Tencent’s quiet rise to global digital dominance is one of the great threats facing American children online. From TikTok to Tencent and your child’s favorite video game, China is committed to influencing our kids and stealing our private data. It is critical that parents begin to take a more active role in curtailing what their kids are playing online.