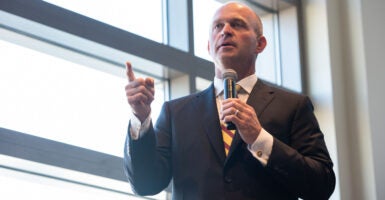 "The Chinese Communist Party ... is the existential threat to freedom in this world,” Heritage Foundation President Kevin Roberts, pictured in December 2021, says Wednesday in remarks to members of the House's Republican Study Committee. (Photo: The Heritage Foundation)

“The Chinese Communist Party, as you know, as your constituents know, is the existential threat to freedom in this world,” Roberts told members of the Republican Study Committee, the House’s largest group of conservative lawmakers, during a closed event on Capitol Hill.

“While Heritage has always been right-minded about that … ,” he said, “every issue that we are confronting from education to taxation to the Green New Deal to how in fact we reorient American foreign policy to help the Ukrainians, it does revolve around America confronting that threat [from China]. It’s sobering.”

Roberts spoke after brief remarks from NBA star Enes Kanter Freedom, who has spoken out on behalf of those whose human rights are violated by China’s communist government.

“If we confront that with good policy and really good rhetoric, with great witnesses like Enes from culture, we will win. Probably in the 2020s we’ll be able to see that victory,” Roberts said.

Roberts noted that Heritage is working on a governing document for January 2025, the beginning of the next president’s term, and invited input from members of the Republican Study Committee.

Earlier Wednesday, news broke that police had arrested an armed California man overnight near the home of Supreme Court Justice Brett Kavanaugh after the man said he was there to kill Kavanaugh.

The man told investigators he was concerned about the recent mass shooting at a Texas elementary school and an expected Supreme Court decision overturning Roe v. Wade, the 1973 ruling that legalized abortion on demand.

“It was on my mind walking over, learning about the news of someone threatening the life, literally, of Justice Kavanaugh,” Roberts told the House Republicans.

He added: “We will wake up this month, and Roe v. Wade will be gone. But as you have been confronted, what do we do?”

The Heritage Foundation wants to play a role in what a post-Roe America looks like, Roberts said.

“While we applaud all efforts to make sure that we get closer to our ideal—which is that there will never be an abortion in this country, period—we know that will take a very long time,” he said.

Heritage’s president said the think tank’s grassroots organization, Heritage Action for America, supports a national ban on abortion after a baby’s heartbeat is detectable, but also would support other pro-life proposals:

We want to be leading with the reality that America is a place where everyone has hope and freedom and rights, [including] the unborn, and that we as a people ought to strengthen our civil society, including in the laws that we passed to minister to these young ladies. This is the pro-woman side.

Roberts also spoke of the importance of the Second Amendment right to bear arms and the deadly school shooting in Texas after parents testified Wednesday on Capitol Hill, some backing more restrictions on gun ownership.

“Most of you are parents,” Roberts told the GOP lawmakers. “We can all sympathize with the sorrow that people who are here today have as they testify. None of us, of course, would condemn them for that.”

It is important to be “zealously focused on school safety,” Roberts argued.

But, he said, cultural problems also are at the core of school shootings and other school violence.

“The most important factor that led to this was that America lost its way morally,” Roberts said. “America stopped placing an emphasis on fatherhood, on real masculinity, not bravo masculinity, but masculinity where young men actually have a purpose in life.”