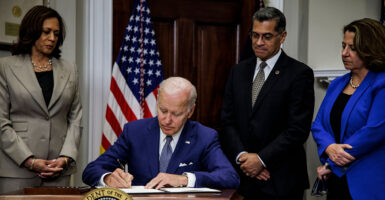 After the Supreme Court’s recent decision to overturn Roe v. Wade, President Joe Biden directed his administration to find ways to provide increased access to abortions. That includes potentially funneling taxpayer dollars to transport women and girls who live in states with stricter abortion laws across state lines into states with more lenient ones.

While this order will create some drama and headlines, it will not change the underlying prohibition on using federal funds for abortions.

Despite this clear prohibition, under the executive order, the Centers for Medicare and Medicaid Services will likely be pressed to see how far the secretary of health and human services can use his authority under Section 1115 demonstrations to waive certain provisions of the law to achieve the order’s goals.

Using Medicaid to pay for traveling to medical care is not new. For example, a Medicaid enrollee that lives in a rural county in State A may already cross over state lines to a larger city in State B to receive medical care.

Medicaid also requires the federal government and states share in the cost of providing “nonemergency transportation” to medically necessary services covered under a state’s Medicaid plan. This can mean Medicaid may, under individual circumstances, pay for fuel, lodging, and meals for enrollees, including for family members’ overnight stays.

The first avenue—and obstacle—the Centers for Medicare and Medicaid Services will likely be pressed to consider with this new executive order is who would cover the costs.

Hitting a dead end on full federal funding, the agency might consider ways to split the costs with the states. Under this scenario, the Centers for Medicare and Medicaid Services would have to consider which state would share in the cost—the state of origin or the state to which an individual traveled?

Does the administration envision states like California spending state taxpayer money to fund abortions and related services for out-of-state residents?

During Hurricanes Katrina and Rita, the Centers for Medicare and Medicaid Services used its authority to waive certain requirements as thousands of Medicaid enrollees left Louisiana and spread to more than 30 states. In those instances, the agency held Louisiana responsible for the nonfederal share of the costs.

Keeping with this standard, would states like Mississippi be willing to spend state taxpayer money to assist in the transportation for out-of-state abortions? Highly unlikely.

The second avenue—and obstacle—the Centers for Medicare and Medicaid Services might be pressed to consider are ways to circumvent the limitations by detaching funding from the individual Medicaid enrollee and instead directing the payments to the service provider, such as a transportation service.

Here too, however, even in those states that have received waivers to use Medicaid funding for activities that are not attached to an individual Medicaid enrollee, such as providing funding directly to hospitals, the Hyde Amendment applies to those federal funds as well, prohibiting their use for abortion-related services.

Thus, despite the anticipation of the executive order, the Centers for Medicare and Medicaid Services will likely report back that states wanting to expand access to abortion for women enrolled in Medicaid outside of their state can only do so by using their own state dollars with no federal match.

When the Biden administration refers to “reproductive health care,” it means abortion. Period. The public should not be confused that it means anything else. It hopes the executive order will miraculously present a new pathway to fund abortions. Yet, under any of the scenarios, such action would be incredible. For policymakers, this only further underscores the importance of protecting—and strengthening—the Hyde Amendment.