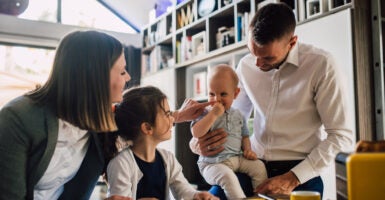 Safe haven policies give women an additional option to spare themselves the heartache of ending the life of a child they do value, while also providing a private and secure transition of care for that child post-birth. (Photo: RgStudio/Getty Images)

A “distressful life and future” threatens women unless they have the ability to avoid the burden of unwanted parenthood via abortion. So reasoned Justice Harry Blackmun in his 1973 Roe v. Wade majority opinion, which deemed elective abortion a newfound constitutional right.

Yet, decades after the Supreme Court’s grim assessment of the options available for those facing an unexpected pregnancy, nationwide “safe haven” laws add another important choice for women outside of Blackmun’s false dichotomy.

First enacted in Texas in 1999, safe haven laws now exist in all 50 states, the District of Columbia, Guam, and Puerto Rico. Hospitals, fire stations, or other designated emergency locations serve as 24/7 drop-off points for those seeking both immediate care and long-term parenting support for an infant.

State laws prioritize privacy and legal protection for women surrendering a baby, with complete anonymity possible throughout the drop-off process in a growing number of states. Many jurisdictions now utilize so-called baby boxes, climate-controlled locking devices accessible from the exterior of buildings, which send an alert to the facility within seconds to allow the safe surrender of a child with no in-person interaction with health care workers or public officials.

Monica Kelsey, founder of the national organization Safe Haven Baby Boxes, emphasizes the “100% anonymous options for parents in need” offered by the fixtures.

Increasingly, states have extended the time period in which a parent may relinquish parenting duties. Over half of states now have policies allowing a baby to be surrendered through at least 30 days post-birth.

In Virginia, recent bipartisan legislation extended from 14 to 30 days the time in which a baby can be delivered discreetly into community care through the state’s safe haven law.

Recognizing the need to raise awareness of the little-known policy, legislators also charged the Virginia Department of Social Services with launching a 24/7 hotline and a statewide marketing campaign to help women know how to access this critical option after birth.

The postpartum time period, aptly dubbed the “fourth trimester” by health professionals, can be especially overwhelming for single parents navigating the physical and emotional transition following birth. Safe haven policies give these women time and choice about their family’s future even after birth, relieving the fear that a parenting burden is inescapable.

Making women aware of safe haven policies during pregnancy can also help women avoid feeling pressured or coerced into an abortion decision in the early weeks of a pregnancy.

Expectant mothers commonly report ambivalence regarding plans for an unexpected pregnancy. Many of the 600 women that our free clinic serves each year share their conflicting emotions about a surprise pregnancy as they discuss their desire for their child alongside their own perceived parenting limitations.

The concerns they voice reflect worries about caring for a child beyond birth, not the actual experience of pregnancy. Indeed, finances, relationship fallout, and career consequences are among the main reasons for abortion cited in various qualitative studies conducted by the abortion industry. Yet, even as women often recognize the future challenges of parenting a new baby, they also report complex emotions about the abortion decision itself.

Many women see abortion as an imperfect resolution to unwanted parenthood. It’s time we listen to their voices and emphasize a broadened framework for choice that includes parenting with community support services (like those freely offered by the nearly 3,000 nonprofit pregnancy help centers similar to the one I lead), open adoption, and also safe surrender options beyond birth.

In Roe v. Wade’s companion case Doe v. Bolton, Justice William O. Douglas stated in his concurring opinion: “Elaborate argument is hardly necessary to demonstrate that childbirth may deprive a woman of her preferred lifestyle and force upon her a radically different and undesired future.”

Yet, more conversation is necessary. Fears and reluctance to raise an additional child can be very real for women, but a “radically different and undesired future” shaped by forced parenthood is no foregone conclusion.

Safe haven policies give women an additional option to spare themselves the heartache of ending the life of a child they do value, while also providing a private and secure transition of care for that child post-birth.

As the Supreme Court prepares to rule in Dobbs v. Jackson Women’s Health Organization, it is imperative that the justices reject the Supreme Court’s anachronistic view that only unfettered abortion access can prevent a dismal future for women.