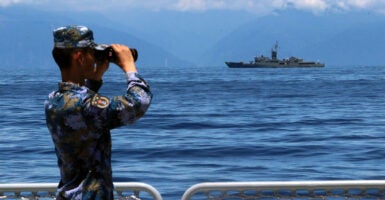 As China continues military drills near the island of Taiwan, the tense security environment brings up a question: Is China going to invade Taiwan soon?

A few weeks before House Speaker Nancy Pelosi’s visit to Taiwan, China reported a sharp economic slowdown to 0.4% growth in the second quarter of 2022 (year-over-year) from 4.8% in the first quarter, due mainly to its “zero-COVID” policy.

The strict restrictions on people’s movement from April to June have severely hurt household consumption, and local services have been struggling amid the repeated COVID-19 outbreaks. The total retail sales of consumer goods dropped by 11% in April, from an average of 7% growth in both January and February.

The almost zero second quarter growth is not the only thing that distresses the Chinese leadership. The economic slump has exposed some deep-rooted problems that authorities ignored for so many years when the economy was thriving. The problem that caught most of the attention recently is the numerous suspensions of unfinished buildings, or “rotten-tail buildings” in the Chinese language, resulting from construction companies’ insufficient funds or unsettled disputes over property rights.

The relaxation of restrictions governing private housing sales in 1998 created a more than two-decade-long housing market boom and piled up debts for both developers and households. The sales of public land to developers became an important source of revenue for local governments. Most people were not aware of the overheating housing market until the economic ship hit recently the iceberg.

The economic slowdown has stressed not only developers but also homebuyers. Many people have lost their jobs following the strict COVID-19 rules that have forced many businesses to close. The unemployment rate is particularly high in 31 big cities—nearly 7% in May and June, up from 5% during January and February.

Chinese banks’ liquidity was put at risk when homebuyers boycotted and refused to pay mortgages for properties they had purchased that remained unfinished when the economic downturn hit.

The central bank’s financial support to developers through extended loans might not be a sustainable solution given the already colossal debts developers and the entire private sector hold. According to data from the World Bank, the private sector’s debt to GDP ratio in China was 183% in 2020, one of the highest in the world and much higher than the U.S.’s 55%.

Ironically, given the significance of the real estate sector in China’s economy, the government has no other choice but to save it from collapse. Property and related sectors are estimated to account for 25% to 30% of China’s GDP. In 2020, over half of the investment in fixed assets nationwide was driven by real estate. Nearly 27 million people were directly employed by the construction and real estate sectors, according to China’s National Bureau of Statistics.

The financial support provided to the real estate sector is the reverse of China’s income redistribution policy under the “common prosperity” program launched in 2021. The program is considered imperative to restrain rich individuals and corporations from growing too powerful and beyond the state’s control. It is also meant to curb potential social instability created by the growing income gap among Chinese citizens. In 2020, Chinese Premier Li Keqiang revealed that China had 600 million people with a monthly income of merely 1,000 yuan ($140).

The government’s squeeze on the real estate sector came to a halt due to the quick downturn of the property market. In the second quarter of 2022, the real estate sector’s growth rate declined by 7%, the most significant drop among all the sectors in China. Housing sales in major cities declined over 40% in May compared to a year ago as lockdowns closed businesses and joblessness spiked.

To attempt to cure the ailing economy, the Chinese Communist Party has set aside its common prosperity program and refocused on economic growth. Obviously, China cannot think about how to divide the cake without having the cake first.

The impact of the zero-COVID policy is so huge that China is less likely to achieve its official growth target of 5.5% in 2022. The World Bank has already revised its economic forecast for China to 4.3% in 2022. The International Monetary Fund lowered the forecast even further, to 3.3%.

In the face of domestic economic hardship, China is in urgent need of greater foreign trade and investment, the other essential element in its “dual circulation” policy, to sustain the overall economy. Announced in 2020, the dual circulation policy is a strategy that aims to stimulate China’s economy by boosting domestic consumption and foreign trade and investment. Without the steady global demand that ensures China’s resilient exports, the economy could have fallen even further.

Foreign manufacturers, especially Taiwanese manufacturing firms, have played a key role in China’s external trade development. In 2020, for example, foreign companies with manufacturing operations in China contributed 36% of China’s total exports and 42% of its total imports, according to China’s Ministry of Commerce.

Nevertheless, as many countries have adopted a “coexistence with the coronavirus” policy, China’s strict zero-COVID policy put it in a less advantageous position vis-à-vis other counties in attracting foreign investors.

In addition, China’s continuous confrontations with the West over human rights issues and the War in Ukraine have further raised foreign firms’ concerns. Some large foreign companies in non-financial sectors have already indicated they are going to reduce investment in China next year while others might adopt a “wait-and-see” approach.

In light of all these troubling economic figures, a war in the Taiwan Strait would further push away foreign investors and crash the already fragile economy in China. In addition, Taiwan ceasing to supply its semiconductor chips to China because of a war would hurt China even more. Chinese smartphone manufacturer Huawei experienced a business slump after Taiwan semiconductor manufacturer TSMC ceased its chip supply to China in 2020. That sent a warning to China’s leadership because its economy relies on assembling key components from overseas.

In 2001, Gordon Chang notably predicted the “Coming Collapse of China” in 10 years. China did not collapse as predicted thanks to its smooth integration with the global economy. It will collapse, however, if it triggers the fires itself by starting a war with Taiwan.