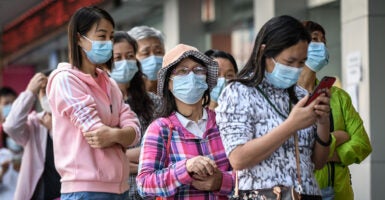 Chinese President Xi Jinping is sticking with COVID-19 lockdowns while the West returns to normality because China’s national vaccine is relatively ineffective at protecting against the virus, a medical expert told The Daily Caller News Foundation.

China’s lockdowns, missing vaccine drug trial data, and the failure of its “vaccine diplomacy” program are evidence that Sinopharm, China’s national pharmaceutical company, developed and marketed an inferior vaccine, Peter Pitts, president of the Center for Medicine in the Public Interest, told The Daily Caller News Foundation. Pitts argued that Sinopharm’s vaccine exposes patients who contract COVID-19 to greater health risks than are faced by individuals who have received vaccines developed in the U.S.

“You don’t lock down your country for an endemic where the symptoms are mild and the length is transient. You lock down your economy for a deadly pandemic,” Pitts said. “They must know something that we don’t know, which is that their vaccine is not working.”

During his career, Pitts said, he often interacted with China’s National Medical Products Administration and testified before Congress on issues related to counterfeit drugs in China.

Pitts pointed to China’s lockdowns as 1 of 3 indicators that Sinopharm’s vaccine is “subpar.”

Despite food shortages, protests, looting, and an announcement that 15 districts had achieved zero transmissions Tuesday, many residents of Shanghai, China’s financial hub, reportedly have remained in lockdown since April 5. Meanwhile, Beijing residents reportedly fear a citywide lockdown following an outbreak in the Chaoyang district that began some time before April 24, according to Reuters.

“A lot of these countries who are in financial straits saw an opportunity to have their countries vaccinated more or less for free and it was a very sexy proposition,” Pitts said. “Yet, all of a sudden China’s ‘vaccine diplomacy’ has just vanished from the conversation.”

After China exported millions of doses—primarily to Africa—countries such as Chile, Bahrain, Mongolia, and Indonesia experienced a surge of COVID-19 cases, The New York Times reported.

Pitts noted that many countries that used Sinopharm’s vaccine, such as the Philippines, since have begun importing Western boosters.

Content created by the Daily Caller News Foundation is available without charge to any eligible news publisher that can provide a large audience. For licensing opportunities for this original content, email licensing@dailycallernewsfoundation.org