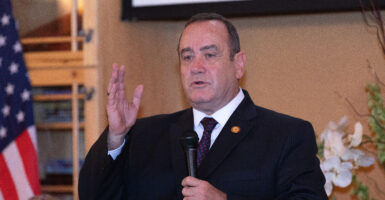 “We are the biggest country they still have left, and we will remain with Taiwan.”

Those are the firm words of Guatemalan President Alejandro Giammattei, who recently pledged to stick to his country’s diplomatic recognition of Taiwan.

As if to underscore the point, in an interview in June, Guatemalan Foreign Minister Mario Bucaro said:

For us, relationships with the United States and with Taiwan are our keys. We will continue to have them at all levels. We want peace in the region, sovereignty of the people of Taiwan, and territorial integrity. And we will continue to support Taiwan in its endeavor.

Guatemala, one of Taiwan’s oldest allies, is among just 14 countries around the world that still recognize Taipei rather than Beijing. The Guatemalan economy, largely driven by agriculture and textiles, comprises about $80 billion in terms of its gross domestic product, roughly double that of Paraguay and triple that of Honduras, both of which also maintain ties with Taiwan.

Half of Taiwan’s allies are located in the Latin American region.

According to The Heritage Foundation’s annual Index of Economic Freedom, which tracks and ranks economic policy environments of 177 countries around the world, Guatemala’s economic freedom score is 63.2, making its economy the 69th-freest in the 2022 index. Guatemala is ranked 15th among 32 countries in the Americas region, and its overall score is above the regional and world averages. (The Daily Signal is the news outlet of The Heritage Foundation.)

Guatemala’s economic freedom has remained largely unchanged for the past half-decade, continuing to be in the “Moderately Free” category. The economy is not heavily burdened by taxes and government spending, but property rights, government integrity, and labor freedom are weak, along with other lingering institutional shortcomings.

It’s notable that at a public event in December hosted by The Heritage Foundation, Giammattei said, “We consider ourselves an ally and friend [of the United States], although some officials in this government don’t understand this in its true dimension.”

Underscoring his government’s alignment with U.S. policy at a time of uncertainty over how the incoming Honduran government will handle China relations, he further noted, “I’ll mention a couple of things that prove it: First, diplomatic relations with Taiwan, not China. We’re the last ones left in the region.”

Indeed, Guatemala is pro-Taiwan and pro-American.

Unambiguously, China has been seeking trade, diplo­matic, and military ties in Latin America and the Car­ibbean over the years. The region is rich in natural resources and developing markets for manufactured goods and even arms.

China does not currently pose a direct military threat in the region, but it represents serious competi­tion that could dilute U.S. influence to a significant degree. Washington cannot ignore this intrusion, but unfortunately, it already has been creating a sizable and growing vacuum for China to fill in that critical region.

In that context, Guatemala’s relationship with Taiwan matters and should be further cultivated. House Speaker Nancy Pelosi’s stopover last week in Taiwan on her congressional jaunt to Asia has generated no small amount of controversy and confusion. Of course, there was absolutely no reason why members of Congress should not visit Taiwan. It is noteworthy that during her visit to Taiwan, Pelosi pointed out:

Taiwan is a very special place—a key ally in peace and security, a global leader in economic dynamism and a model of democratic governance. …

Sadly, Taiwan has been prevented from participating in global meetings, most recently the World Health Organization, because of objections by the Chinese Communist Party.

While they may prevent Taiwan from sending its leaders to global forums, they cannot prevent world leaders or anyone from traveling to Taiwan to pay respect to its flourishing democracy, to highlight its many successes, and to reaffirm our commitment to continued collaboration.

To that end, it’s in the clear interest of Washington to welcome Guatemala’s continued, recommitted diplomatic engagement with Taiwan and further encourage greater practical interaction between the two nations.