The Left Keeps Injecting Politics Into Movies and TV. This Is Entertainment? 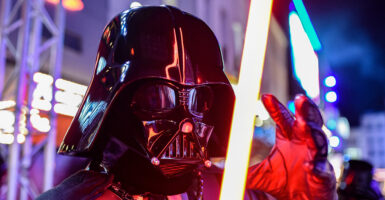 The left has to inject woke politics into everything. That makes for really bad entertainment. Pictured: Star Wars character Darth Vader at the European premiere of "Star Wars: The Rise of Skywalker" at Cineworld Leicester Square on Dec. 18, 2019, in London. (Photo: Gareth Cattermole/Getty Images)

Does watching a leftist activist dressed like an elf lecturing you about feminism for an hour sound like a good time? How about watching “Star Wars” dump on Donald Trump and the MAGA movement? If not, I’d recommend avoiding TV for a while.

As much as it seems like parody, these are apparently plot points for two upcoming programs.

“The Lord of the Rings: The Rings of Power” and “Star Wars” spinoff “Andor” have both revealed they plan to revel in modern left-wing politics at the expense of good storytelling.

During a recent appearance at San Diego Comic-Con, a yearly convention celebrating all things nerdy, one of the actresses from “Rings of Power” claimed her character on the show was an activist and that the show writers were giving her the opportunity to be a female character with agency.

Nazanin Boniadi, who plays the character Bronwyn, is a prominent human rights activist focusing on women’s rights in Iran. She has previously advocated for expanding government action on LGBT issues and reauthorizing the contentious Violence Against Women Act.

Boniadi told a group of gathered journalists at the convention, “What I love about the writers on this show is that they have given every woman on the show, every female character, such agency.”

In a later interview with Showbiz Junkies, Boniadi added, “I call Bronwyn the fantastical version of myself because she’s an activist; I’m an activist. She’s a healer, I was premed. We have so much in common.”

Keep in mind that Boniadi’s character is in Middle-earth, not 2022 San Francisco. Seems like she should be more concerned about orcs and Sauron than pushing radical feminism on TV.

Then we have “Andor,” focusing on lead character Cassian Andor as played by Diego Luna.

In addition to not being super creative (Andor is basically a cheap knockoff of Han Solo), the show is apparently going to be a Trump bash fest.

Actress Fiona Shaw, who plays a character named Maarva on the show, raved in an interview with Empire magazine that writer/director Tony Gilroy “has written a great, scurrilous [take] on the Trumpian world.”

Shaw adds, “Our world is exploding in different places right now, people’s rights are disappearing, and Andor reflects that. [In the show,] the Empire is taking over, and it feels like the same thing is happening in reality, too.”

Wow, what a new and creative take! Donald Trump is, like, actually evil. And he’s basically Darth Vader.

This is garbage, pure and simple. But it’s a frustratingly familiar type of garbage.

Like a swarm of perpetually outraged locusts, the left devours cultural properties, including “Star Wars” and “The Lord of the Rings.” The end result is always desiccated husk, devoid of any of the charm that attracted people to the show or movie in the first place.

And when fans of the original property are rightfully angry that their shows are being hijacked to disseminate propaganda, they’re accused of gatekeeping or bigotry.

On that point specifically, the “Rings of Power” team has blatantly demonstrated it couldn’t care less about Tolkien’s story and is only interested in wearing the property like a skin suit.

Shippey isn’t some nobody. His book “The Road to Middle-Earth” is widely considered to be the definitive work on Tolkien and his written worlds.

The radical left doesn’t care about the lore; it’s window dressing to the main message, which is political zealotry wrapped in a thin veneer of pop culture.

None of this is to say that there’s no place for politics in media. When done well, shows and movies can be elevated by tying their stories to political issues and reasoned social commentary.

Back in the ’80s and ’90s, “Star Trek: The Next Generation” deftly handled political issues by weaving them into the narrative. The show never got preachy, though, and USS Enterprise Captain Jean-Luc Picard was able to transmit a message or moral that resonated with viewers each week.

But that’s not what modern shows are doing. Activists do not belong in “Lord of the Rings,” and attacks on Donald Trump definitely don’t belong in “Star Wars.”

The popular internet adage “go woke, go broke” hopefully applies here, and companies will realize that killing a property for leftist adulation is not a recipe for success.

Middle-earth and a galaxy far, far away are not the places to stand on your political soapbox.