They Butchered ‘Star Wars,’ and I’m Not Hopeful for ‘The Rise of Skywalker’ 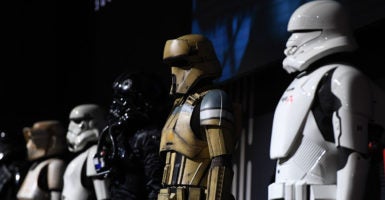 Who knows? Maybe “The Rise of Skywalker” will bind all the tedious storylines of the first two “Star Wars” sequels into a cohesive and rewarding coda.

Then again, if the new trailer offers any clues—and as I understand it, this is the point of trailers—the movie looks like it will ratchet up the fan service in hopes of saving an incomprehensible mess.

If someone asked you to cogently explain the narrative of the sequel trilogy, could you honestly do it?

“The Last Jedi” has been on Netflix for months, and this lifelong fan—a fan who paid to see “The Revenge of the Sith” in theaters at least three times—hasn’t even been able to rewatch it once for free.

To put that in perspective, I would rather binge entire seasons of an English baking show than sit through a $300 million sequel to my favorite childhood movie.

These failures might be forgivable if the space opera made any sense. Instead, we are left to watch characters spin their hyperdrives while J.J. Abrams performs a mercy killing of one original character per movie.

May they rest in peace.

It’s just incomprehensible that they could mess this up so badly.

When I was 8 years old, I first sat in a movie theater and watched “Star Wars” (not yet “The New Hope”). It was probably the most exhilarating cultural experience of my youth.

The story, the effects, the sound were all light years ahead of anything a kid could imagine. Much of my time from then on was spent convincing relatives to buy me “Star Wars” figures.

I helped make George Lucas, who had famously kept the merchandising rights for his film, a zillionaire. And I guarded these toys with my life.

Until I was around 12, my dream was to own one of those expensive Kenner Millennium Falcons. (If I could get away with it, I’d buy one today.)

Learning that Vader was Luke’s father had real emotional impact on this 10-year-old. I’ve wasted more time reading “Star Wars” “novels” than I care to admit. (Why didn’t they just use the “Thrawn” trilogy as a basis for the sequels?)

Even in my 20s, I was still legitimately excited by the prospect of prequels. I remember waiting forever for the “Phantom Menace” trailer to load on my dial-up connection and watching those Lucas creations emerging from the fog.

It was a short-lived thrill, of course. Though the opening scene of “The Phantom Menace,” displaying the power and prestige of Jedi cult, held some promise, my heart soon began to sink as the story submerged into trade negotiations (possibly the most boring topic in the entire galaxy) and a discursive on midichlorians.

Why was Lucas wasting precious time explaining the genetics behind the Force? Why was he killing off the best characters (Qui-Gon Jinn and Darth Maul)?

All of this happened a long time ago and somewhere far away, and much of it should be left to the imagination.

But Lucas, freed of any oversight, had somehow managed to create prequels that were simultaneously excessively convoluted and insultingly unsophisticated.

So some of us blamed Lucas, whose wooden dialogue and problems with pacing were well known. Some of us had high hopes for Abrams, who had deftly rebooted the “Star Trek” franchise while preserving the sensibilities of the original show.

Some of us are constantly being disappointed. In the end, the most notable accomplishment of the sequels was making the prequels seem bearable.

I’m not completely bitter about the sale of Lucasfilm to Disney. “Rogue One” is one of the better films in the franchise. The animated shows are fun. And though many people will disagree, I find “Solo” preferable to either of the sequels or any of the prequels.

My expectations for “The Mandalorian” are far higher than they are for “The Rise of Skywalker.”

Maybe the big reveal of “The Rise of Skywalker” will make it all worthwhile, but I doubt it. The thing is, I can’t get myself to really care who Rey’s parents are because I don’t care about Rey or anyone else.

After a string of disappointments, I’m mostly just thankful the madness is coming to an end.