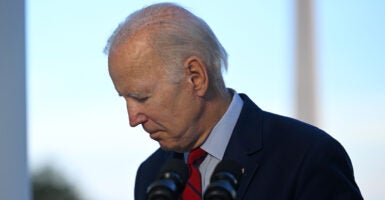 President Joe Biden turns from his lectern Monday after speaking from the Blue Room balcony of the White House about the U.S. drone strike in Afghanistan that killed al-Qaeda leader Ayman Al-Zawahri. (Photo: Jim Watson-Pool/Getty Images)

With another strong topline unemployment report released Friday, President Joe Biden already is trying to hide behind the fig leaf of low nominal unemployment, but his party can’t hide the deep economic malaise overshadowing most Americans.

Sadly, Democrats want to make things worse with a $740 billion tax-and-spend blowout that would kill jobs and do nothing to fight crippling inflation.

The number of U.S. jobs jumped 528,000 last month, the Labor Department reported Friday, and the unemployment rate fell to 3.5% from 3.6%, matching a five-decade low. But that top line masks the drop in July of the labor force participation rate to 62.1% in July from 62.2% in June.

This is still far below the 63.4% labor force participation in February 2020, which translates to millions fewer people who would otherwise be working today compared to before the COVID-19 pandemic.

“Today, the unemployment rate matches the lowest it’s been in more than 50 years: 3.5%. More people are working than at any point in American history. That’s millions of families with the dignity and peace of mind that a paycheck provides,” Biden claimed. “And, it’s the result of my economic plan to build the economy from the bottom up and middle out.”

Meanwhile economic elites continue to dismiss Americans’ pain. Mary Daly, president of the San Francisco Federal Reserve Bank, recently said, “I don’t feel the pain of inflation anymore. I see prices rising, but I have enough that I can make substitutions. … Many, many Americans have enough.”

Mary “Antoinette” Daly is out of touch with reality for most people. The truth is 61% of Americans— roughly 157 million adults—are living paycheck to paycheck. Consumer sentiment is at record lows as credit card debt is skyrocketing at a rate not seen in 20 years as people go into the red to pay for inflation.

Credit card balances grew by $46 billion in the second quarter of 2022, the New York Federal Reserve reported, a 5.5% spike from the first quarter. There was also a 13.1% spike in new credit card accounts. “Americans are borrowing more, but a big part of the increased borrowing is attributable to higher prices,” the New York Fed said in a news release.

Meanwhile, gas prices have dropped some, though they’re still painfully high compared to when Biden took office. On Wednesday, OPEC+ announced it would raise oil output by a mere 100,000 barrels per day, an amount called “tiny” even by news outlets such as Reuters, which called it “a setback to U.S. President Joe Biden after his trip to Saudi Arabia to ask the producer group’s leader to pump more to help the United States and the global economy.”

Democrats are proposing an additional setback through their falsely-named “Inflation Reduction Act,” a bill that steals hundreds of billions of dollars from toddlers today to pay for failed Solyndra-style projects that have failed in Europe. Our European allies have hobbled themselves economically through green schemes that have made them even more dependent on Russia’s Vladimir Putin.

What’s sad is that these green scheme projects end up harming poor, minority and female-led households hardest. It’s the opposite of progressive and fundamentally anti-scientific to harm poor people with unproven Green technologies.

The views and opinions expressed in this commentary are those of the author and do not reflect the official position of the Daily Caller News Foundation. Content created by the Daily Caller News Foundation is available without charge to any eligible news publisher that can provide a large audience. For licensing opportunities for our original content, email licensing@dailycallernewsfoundation.org.