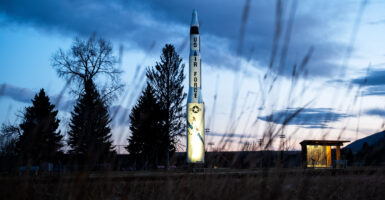 Deterrence is a better way to prevent hostilities than appeasement.

On Thursday, the Biden administration delayed a routine test of the Minuteman III intercontinental ballistic missile, a system that helps keep America safe by deterring major nuclear attacks on the homeland.

The reason behind the delay was reportedly to avoid escalating tensions with China after Speaker of the House Nancy Pelosi’s visit to Taiwan. But China clearly doesn’t care about de-escalation. So why should the U.S.?

During the speaker’s visit, which comports with the United States’ longstanding “One China” policy, China has been firing multiple nuclear-capable missiles into Taiwanese waters. And these are in no way scheduled, routine tests like the one delayed by the Biden administration. They were blatantly meant to intimidate Taiwan and “rehearse reunification operation[s],” according to Chinese state media.

These actions are illegal, highly escalatory, and also dangerous if one side miscalculates or a missile misses its target.

In response to China’s aggression, the Biden administration not only choose to do nothing, but it canceled a completely unrelated missile test.

It’s one thing to be prudent about our actions, it’s another thing to appease autocrats and project weakness in the face of aggressive adversaries. Especially if it’s at the expense of our routine missile tests—which are critically important.

The Minuteman III missiles were built in the 1960s and need to be tested periodically to ensure that they will work as intended. The idea that a missile might fail if ordered to launch is not far-fetched. A missile test was aborted on the launch pad last year, and before that, one failed in 2018.

And get this. It would be bad enough if it was a one-off test that was delayed. But it’s actually the third delay or cancelation this year.

The first cancelation was in March, shortly after Russia’s unprovoked invasion of Ukraine and Russian President Vladimir Putin ordered his own nuclear forces to a level of “special combat readiness.” The administration was worried that our test would enflame tensions with Russia, so a scheduled missile test was delayed.

The test was rescheduled for a month later, but then canceled after Russia conducted a missile test of its own, in another show of appeasement in the face of provocation.

Now, the year is three-fourths of the way through, and the U.S. has conducted zero tests of the 50-year-old Minuteman III missile, which is so old that it will just barely be able to remain viable until its replacement is delivered in 2029.

Usually, these missile tests are conducted at least twice per year.

If our adversaries were to doubt that our aging missiles will work if we tried to launch them, then they may view our deterrent as less credible. With a less credible U.S. deterrent in the eyes of our adversaries, they could perceive themselves as being freer to take extra risks in their aggression around the world.

To make matters right, the Biden administration should reschedule this important missile test as soon as possible.