Why Speaker Pelosi Must Go to Taiwan 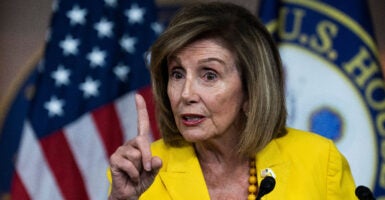 House Speaker Nancy Pelosi, D-Calif.—seen here at a Capitol Hill news conference on July 21—should not yield to pressure from Beijing to cancel her planned visit to Taiwan. (Photo: Tom Williams/CQ-Roll Call/Getty Images)

Beijing is warning of “serious consequences” and “firm and resolute measures” should House Speaker Nancy Pelosi follow through with her plans to visit Taiwan.

The Chinese Communist Party can’t help itself. Like so much of what China has done in the past 10 years or so, these pronouncements only help to bring about the thing that it’s trying to prevent.

At this point, Pelosi must visit. To back off in the face of these menacing warnings would signal to the region and beyond a changing of the guard: Beijing says ‘Don’t!’ and the U.S. obeys.

Pelosi, D-Calif., for all her demerits—and I oppose her on 95% of everything—is an original panda slayer. Her interest in going to Taiwan before she relinquishes the speaker’s gavel for the final time is no surprise.

What is a surprise is that president of the United States would try to dissuade her from doing it.

She would not be the first House speaker to visit Taiwan. Congressional delegations go to Taiwan all the time. Cabinet members go, although not nearly as often as they should. Just two years ago, then-Secretary of Health and Human Services Alex Azar visited Taiwan and met with its president.

What President Joe Biden should be doing is making clear that the U.S. will continue to make these demonstrations in support of Taiwan, and that he will do nothing to stand in the way of Pelosi or any other member of Congress from visiting.

The administration is making good noises in this regard, leaving the decision up to Pelosi—as if it has a choice. Its public statements, however, make clear to Beijing that if she does go, the president and his team are not to blame.

This appears to be part of a broader trend. The Biden administration got off to a solid start on China policy. Taiwan’s Washington representative was at the president’s inauguration for the first time since the U.S. ended diplomatic recognition of Taiwan in 1979.

Then, in June of 2021, Biden expanded a blacklist of Chinese military and surveillance-linked companies first barred from U.S. investment by President Donald Trump.

Privately, that summer, even former Trump officials talked about the remarkable continuity between the two administrations.

Yet, in retrospect, that’s when the administration’s resolve on China seems to have peaked. Some of the things that have occurred since include the administration’s failed effort to scuttle passage of the Uyghur Forced Labor Prevention Act and a series of anemic arms sales to Taiwan.

On the latter, the administration has formalized a policy of selling Taiwan only the most defensive weapons. It portrays that as an effort to help Taipei prioritize its needs and become a harder target. Of course, it also means providing Taiwan weapons that are the least objectionable to Beijing.

This turn away from continuity with the previous administration’s China policy to one of greater deference to China was brought home in a report by Nikkei Review in June that the Department of Treasury had given investors in the aforementioned blacklisted companies a green light to hold on to their shares.

So maybe the Biden administration carrying Beijing’s water in opposition to the Pelosi trip shouldn’t be so surprising after all.

Let’s hope it fails, because cancellation of the speaker’s trip to Taiwan would be a terrible sign of declining U.S. leadership in Asia.