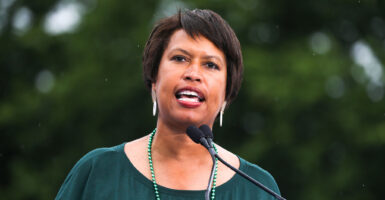 As busloads of illegal immigrants sent by border states Texas and Arizona make their way to the nation’s capital, D.C. Mayor Muriel Bowser is feeling overrun.

Bowser on July 28 formally requested deployment of the National Guard to deal with the influx of illegal migrants as she claimed her city, the nation’s capital, was at a “tipping point.”

“This is a very significant issue,” Bowser acknowledged in mid-July in a letter to Defense Secretary Lloyd Austin. “Our collective response and service efforts have now become overwhelmed.”

The call for help comes after Bowser and other Democratic politicians initially downplayed the massive wave of illegal immigrants flooding across the nation’s southern border and had done everything in their power to exacerbate the crisis.

President Joe Biden has made opening the southern border a priority by proposing to rescind his predecessor’s “Remain in Mexico” policy for asylum-seekers and to revoke Title 42, a rule that allows the government to quickly deport illegal immigrants over public health concerns.

Now that the problem of illegal immigration is in Bowser’s backyard and that of New York City Mayor Eric Adams, they’re seeing what it’s really like.

Bowser is experiencing a minuscule fraction of the problem that Texas is suffering through daily with illegal immigration, but she’s still complaining.

CNN reported that a little more than 5,000 illegal immigrants have arrived in the District of Columbia to date. As of the end of June, the Border Patrol had logged more than 2 million encounters at the southern border since the beginning of the fiscal year last Oct. 1.

Bowser isn’t the only Democratic politician moaning about being inundated with a flood of migrants.

Adams, whose city sought to allow illegal immigrants to vote in municipal elections, before the measure was struck down, also begged the federal government for aid.

“If we do not get these urgently needed resources, we may struggle to provide the proper level of support our clients deserve, while also facing challenges as we serve both a rapidly growing shelter population and new clients who are seeking asylum,” Adams said July 19.

For his part, Texas Gov. Greg Abbott, a Republican, invited Bowser and Adams down to the southern border to get a sense of how dire the situation really is. Adams refused and claimed Abbott was just looking for a photo-op.

If the District of Columbia and New York City are so overwhelmed by such a tiny fraction of all the illegal immigrants now in this country, how can Democrats say with a straight face that things are fine at the southern border?

From humanitarian concerns surrounding migrant deaths and human trafficking to exploding drug smuggling, the border is definitely not “secure.”

The United Nations says the U.S.-Mexico border is the “deadliest land crossing in the world” and that 728 migrants died last year attempting to make the journey across. Meanwhile, drugs flow across the border like a river, and hundreds of pounds of fentanyl are seized each month.

In the face of this obvious crisis, what should be done?

Despite how hypocritical they are for begging the federal government to step in and help, Bowser and Adams correctly say that the influx of illegal aliens requires federal intervention. We currently are experiencing unprecedented levels of illegal immigration that require a concerted effort at the national level.

The Biden administration can pull back from the foolish policies it has put in place and take things at the border more seriously. By pledging to keep both Title 42 and Remain in Mexico in place, Biden would signal that he is serious about combating illegal immigration.

Additionally, Democrats could stop making overtures to migrants and promising them citizenship or benefits for crossing illegally. Why would anyone go through the difficult process to become a citizen legally when he could get citizenship though mass amnesty programs such as the Obama-era Deferred Action for Childhood Arrivals, or have all the benefits of citizenship even without becoming one?

Those are commonsense strategies that the Biden administration could implement right now, but regrettably, it likely won’t do so.

Democratic Party leaders should be held accountable when they act like hypocrites. If the National Guard is good enough for the D.C. mayor now, why wasn’t it when she turned down the Trump administration’s offer to send in Guard troops ahead of what became the Capitol riot on Jan. 6, 2021?

If the District of Columbia and New York need help dealing with illegal immigration, border states surely deserve federal help as well. Texas and Arizona shouldn’t be expected to face the consequences alone for the Biden administration’s policy failures.