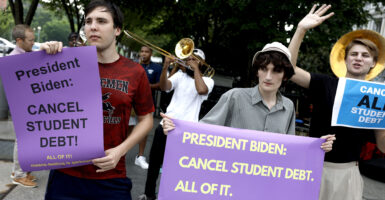 A new report from the Government Accountability Office details a breathtaking discrepancy between what the federal government claimed the student loan program would generate, and what it actually costs taxpayers. As GAO explains:

“Although the Department of Education originally estimated federal Direct Loans made in the last 25 years would generate billions in income for the federal government, its current estimates show these loans will cost the government billions.

How did the Department of Education get it so wrong? How is it they could claim student loans would bring in more than $100 billion in revenue for the federal government, when in reality they cost taxpayers nearly $200 billion?

What accounts for this massive miscounting?

GAO looked at the Department of Education’s budgets over the years and found that they were hundreds of billions of dollars off due in large part due to bad assumptions. GAO estimates that 61 percent of the bad accounting is due to these faulty assumptions. Those bad assumptions included incorrect estimates pertaining to the economic standing of borrowers, underestimating the likelihood of borrower default, and underestimating the percentage of borrowers who would enter income-driven repayment (IDR) plans.

The Direct Student loan program (the largest federal student loan program) accounts for nearly $1.4 trillion of the $1.7 trillion in outstanding student loans. About half of all loans issued through the Direct Loan program are currently being repaid through IDR plans, which cap monthly loan payments based on income. As the Congressional Budget Office reported in February, 2020, “borrowers who enroll in IDR plans tend to borrow more and earn less than borrowers in fixed-payment plans.”

The other 39 percent of the miscalculation is due to programmatic changes such as ongoing repayment pauses, participation in Public Service Loan Forgiveness, interest waivers, and new income-driven repayment plans. Many of these policies were put into place ostensibly because of the pandemic, despite the fact that college graduates were less likely to be unemployed and more likely to be able to work from home during the COVID-19 pandemic.

What’s more, the Department of Education will continue to use these inaccurate accounting metrics for the next three years, meaning the agency’s budget will be wrong until at least 2026.

To make matters worse, none of this bad accounting includes any of the Biden administration’s recent or forthcoming actions on student loans.

The administration recently issued a Notice of Proposed Rulemaking pertaining largely to the existing Borrower Defense to Repayment Rule. Biden’s proposed changes would expand access to loan forgiveness for total and permanent disability, expand the criteria through which borrowers can claim they’ve been defrauded by an institution and thus deserve loan discharge, and would make the Public Loan Forgiveness Program more generous by allowing borrowers to get credit toward PSLF for the months when they were in deferment and forbearance.

It would also count late payments toward that end. Notably, the Department of Education proposes to “simplify” the process for claiming Public Service Loan Forgiveness by sharing data with other agencies in order to automatically grant PSLF for federal employees. These changes would cost taxpayers tens of billions of dollars more in the near term.

But the administration’s future plans are what are sure to break the bank. It’s no secret the Biden administration is contemplating blanket student loan forgiveness of at least $10,000 per borrower. Such a push is likely to heat-up as the pause on student loan repayments nears an end on Aug. 31. The New York Federal Reserve Bank estimates that forgiveness of $10,000 per borrower could cost taxpayers at least $321 billion.

But the moral hazards are where the real costs lie. Student loan forgiveness would likely encourage colleges to raise tuition even higher—particularly if graduates expect student loans to be forgiven again in the future. Indeed, if current student loan balances are forgiven, why wouldn’t today’s students borrow the maximum amount allowed to attend the most expensive school possible, with the expectation that their debt will also be forgiven in the future?

The Department of Education’s massive undercounting of the cost of the federal student loan program is yet one more reason Washington should not be in the business of providing loans for college. It used to be the domain of the private sector, and to the private sector it should return. Instead, the Biden administration wants to grow Washington’s role and increase taxpayer exposure by forgiving more and more of the outstanding student loan portfolio.

GAO’s new blockbuster report is a case study in why this bad accounting – and access to easy money through federal student loans – cannot continue.