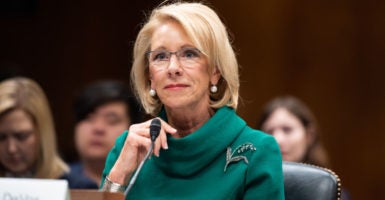 Given significant taxpayer exposure, the Obama-era borrower defense rule was rightly deemed by many as far too broad. Education Secretary Betsy DeVos, pictured at a congressional hearing in March, has noted of that iteration, “All one had to do was raise his or her hand to be entitled to so-called free money.” (Photo: Michael Brochstein/Echoes Wire/Barcroft Media/Getty Images)

The battle over the Department of Education’s borrower defense to repayment rule, which governs student loan repayments when a student claims he has been defrauded by a university, has made its way to President Donald Trump’s desk.

Congress this week utilized the Congressional Review Act to overturn the Trump administration’s rewrite of the Obama-era rule.

House and Senate leaders on Tuesday enrolled the Congressional Review Act resolution to overturn [Education Secretary Betsy] DeVos’ new rule. That final procedural step now means that legislation will be presented to the White House for Trump’s signature or veto.

The Department of Education’s 2019 rewrite of the borrower defense to repayment rule brought commonsense reforms to the onerous Obama-era version of the rule.

Originally, the rule attempted to protect students from schools that had defrauded them, providing student loan forgiveness in full or in part.

Unfortunately, “fraud” in higher education is wildly difficult to define, and the Obama administration’s 2015 rewrite of the rule defines it so broadly that students could ask for their loans to be discharged if they thought they hadn’t received the education they were promised.

Taxpayers could be on the hook for student loan payments that are discharged under the rule. Given significant taxpayer exposure, the Obama-era borrower defense rule was rightly deemed by many as far too broad. DeVos has noted of that iteration, “All one had to do was raise his or her hand to be entitled to so-called free money.”

Importantly, the 2019 rewrite of the borrower defense to repayment rule would protect the due process rights of universities and American taxpayers from frivolous requests for student loan discharge.

American colleges and universities face significant financial stress during the COVID-19 pandemic. It’s more important now than ever that the federal government not place burdensome regulations on schools under the guise of borrower defense.

The Trump administration’s revision of the rule gives universities their day in court when a claim is brought against them, unlike the Obama administration’s version, which operated under the presumption of guilt for a college.

Schools could be required to post a letter of credit and face Department of Education penalties before any proof of wrongdoing. The mere accusation of fraud was enough to suggest a school was guilty.

It seems apparent that the Obama administration’s higher education regulatory efforts focused disproportionately on the for-profit sector, and the original borrower defense to repayment rule was no exception.

While increased accountability for taxpayer dollars is badly needed across the higher education sector, there’s a troublesome narrative that all bad actors in higher education reside in the for-profit sector.

Sen. Dick Durbin, D-Ill., even went so far as to state on the Senate floor that “these for-profit colleges are the coronavirus of higher education.”

That extreme hyperbole underscores the open hostility that many lawmakers have toward proprietary institutions while turning a blind eye to the significant shortcomings of many nonprofit institutions.

This isn’t the first time lawmakers have attempted to use higher education regulations to disproportionately target for-profit colleges.

The gainful employment rule, for example, which required schools to prove certain outcomes measures for students, only applied to for-profit colleges and to certain courses of study at nonprofits.

However, 60% of private nonprofit programs would fail the gainful employment rule, along with 70% of programs at public nonprofit institutions. The targeting of for-profit colleges under the guise of regulating “bad actors” simply doesn’t bear out in the facts.

The 2019 Trump administration rewrite of the borrower defense to repayment rule appropriately addresses the question of accountability.

Indeed, roughly 45 million Americans struggle with more than $1.6 trillion in outstanding student loan debt, with many graduating without the skills necessary to acquire a job, prompting increased scrutiny.

However, with hundreds of billions of dollars pouring into our universities each year through federal student aid programs, it is American taxpayers, rather than the universities, that pay the most significant price when students default on their loans.

DeVos has rightly taken taxpayer considerations into account with the 2019 borrower defense to repayment rule.

While some in Congress want to return to a regulatory environment that stifles growth and unfairly burdens quality schools and American taxpayers, the Trump administration should maintain a friendly regulatory environment, much like the president called for in his May 19 executive order on regulatory relief to support economic recovery.

Proper oversight respects due process and insulates taxpayers from student loan forgiveness. We should not backtrack on that smart regulatory reform.