The Injustice of Canceling Student Debt 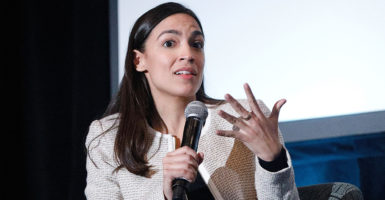 This week, Rep. Alexandria Ocasio-Cortez claimed that it was “literally easier” for her to win the congressional election than pay off her student loan debt—which says something unfortunate about both the cost of college and the electorate’s choices.

Ocasio-Cortez was commenting on Sen. Bernie Sanders’ new plan to eliminate $1.6 trillion in student debt and transform higher education into a “free” and “fundamental right.”

“This proposal will make it possible for every person in America to get a college education no matter what their financial situation,” Sanders explained.

This might surprise some people, but every person in America can already get a college education, no matter his financial situation. Most poor Americans, in fact, can attend college for a relatively reasonable price tag.

Sanders’ socialization of the university system would be far more helpful for high-earning individuals.

One Georgetown University study, for example, finds that a bachelor’s degree is worth $2.8 million on average over a lifetime, which tells us that college is often a pretty good investment.

Then again, around two-thirds of people in the American workforce have no college degree. Some Americans have no interest in higher education. Many don’t need university degrees for the vocations they pursue.

They can, I suppose, go to college and earn a useless degree in journalism or comparative literature for kicks. Or, maybe, they could enter the workforce and start subsidizing people like Heather Gautney.

“I am $180k in debt. I have a PHD and am a tenured professor—my students are in the same boat, sinking in debt,” Gautney, a senior policy adviser for Sanders, tweeted. “I pay $1100/month in student loan debt, half of my rent. We MUST #CancelStudentDebt.”

This tweet, more than perhaps any political argument made about “free” college, encapsulates the fundamental injustice of student loan cancellation. Because above all else, Sanders’ plan rewards people who overpaid for degrees or made bad fiscal choices.

Why should those who’ve worked to pay off their loans—and perhaps even their children’s loans—subsidize Gautney’s doctorate in sociology?

Why should Americans who skipped college and went straight to work to start businesses and families help pay the $2,200 rent of tenured professors who live in expensive areas like New York (where Gautney teaches)?

Why should conscientious kids who weighed the economic trade-offs of the situation, and went to reasonably priced colleges, or community colleges, bankroll the careers of socialists who do not?

If Ocasio-Cortez feels underpaid at $170,000—approximately $110,000 above the average American’s salary—she is free to go out into the meritocratic world and find a vocation where her talents will be more fairly remunerated.

Sanders’ plan will ostensibly be made “free” by taxing all trades, and putting fees on bonds and derivatives from the universally reviled institution of Wall Street.

For one thing, the cost of all of this will be passed through to investors and businesses, not CEOs, who, I assure you, will continue to send their kids to the very best schools.

Of course, the idea that Sanders (or Elizabeth Warren) is accurately calculating the price of a government entitlement is, to be charitable, highly unlikely. History tells us the cost is sure to skyrocket.

The Government Accountability Office reported that loan-forgiveness programs will already cost taxpayers $108 billion over the next 10 years. And Sanders has already underestimated his “Medicare for All” idea by tens of trillions of dollars. There’s nothing more expensive than “free.”

None of this is even accounting for the moral hazard caused by “free college”—or “free” anything, for that matter.

We’ve seen some of this in play since the Obama administration took over responsibility for college loans.

Once colleges know that prospective students can get any loan for any major they desire, incurring no risk whatsoever, what motivation do these institutions have to offer degrees of value?

And, in the end, forgiveness does nothing to lower costs. Then again, when the state takes control of private institutions, it inevitably turns to price controls and all the usual tools that destroy industries.

The world doesn’t owe you a dream college or a dream house or a dream job. You have no right to someone else’s labor and time.

If you want to attend free college, ask professors to offer you their lectures gratis or ask school administrators who run massive endowments to open their doors to everyone.

Or, maybe, ask them to bring down their tuition prices.