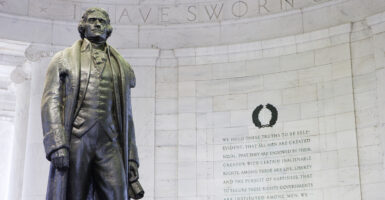 Thomas Jefferson is under increasing attack by the left, even at his former home, where his accomplishments as Founding Father are taking a back seat. Pictured: Statue of Thomas Jefferson inside the Jefferson Memorial in Washington, D.C. (Photo: ericfoltz/Getty Images)

Thomas Jefferson is coming under increasing attack, even at Monticello, his former estate, now a museum near Charlottesville, Virginia. The main focus seems to be on slavery, not on Jefferson’s many unique accomplishments.

According to the New York Post, “Books by critical race theory proponents Ibram X. Kendi and Ta-Nehisi Coates enjoy pride of place in the visitor center’s gift shop, while the smaller Farm Shop store displays five titles on Jefferson’s slaves—and a single biography of the man himself.”

In New York City, a statue of Jefferson was removed from City Hall after being displayed for 187 years.

>>> The Heritage Foundation just issued a new report on how the left is rewriting the history of our first presidents at their former homes and museums, including Jefferson’s Monticello. Read it here.

In an important article in the Smithsonian Magazine, “The Dark Side of Thomas Jefferson,” historian Henry Wiencek is highly critical of Jefferson’s role as a slaveholder. But he recognizes Jefferson’s historic role in advancing freedom even, eventually, for those held in slavery.

With five simple words in the Declaration of Independence—‘all men are created equal’—Thomas Jefferson undid Aristotle’s ancient formula, which had governed human affairs until 1776: ‘From the hour of their birth, some men are marked out for subjection, others for rule.’ In his original draft of the declaration, in soaring, damning, fiery prose, Jefferson denounced the slave traders as an ‘execrable commerce … this assemblage of horrors,’ a ‘cruel war against human nature itself, violating its most sacred rights of life and liberties.’ As historian John Chester Miller put it, ‘The inclusion of Jefferson’s strictures on slavery and the slave trade would have committed the U.S. to the abolition of slavery.’

Indeed, that was how it was interpreted by some of those who read it at the time. Massachusetts freed its slaves on the strength of the Declaration of Independence, weaving Jefferson’s language into the state constitution of 1780.

The meaning of ‘all men’ sounded equally clear to the authors of the constitutions of six Southern states that they amended Jefferson’s wording. ‘All freemen’ they wrote in their founding documents, ‘are equal.’ The authors of those state constitutions knew what Jefferson meant, and could not accept it. The Continental Congress ultimately struck the passage because South Carolina and Georgia, crying out for more slaves, would not abide shutting down the market.

Historian David Briton Davis declares, “One cannot question the genuineness of Jefferson’s liberal dreams. He was one of the first statesmen in any part of the world to advocate concrete measures for restricting and eradicating Negro slavery.” Later, laments Davis, “The most remarkable thing about Jefferson’s stand on slavery is his immense silence.”

It is interesting to recall Jefferson’s harsh analysis of slavery, which had an important impact on the American society, despite his inability in his personal life to live up to the values he promoted, as is often the case with imperfect and fallible human beings.

It is also interesting to consider Jefferson’s role with regard to slavery. In his original draft of the Declaration of Independence, one of the principal charges made by Jefferson against King George III and his predecessors was that they would not allow the American colonies to outlaw the importation of slaves.

When Jefferson was first elected to the Virginia Legislature at the age of 25, his first political act was to begin the elimination of slavery, though he was unsuccessful. In his draft of a constitution for Virginia, he provided that all slaves would be emancipated in that state by 1800 and that any child born in Virginia after 1801 would be born free. This, however, was not adopted.

In his draft instructions to the Virginia delegation to the Continental Congress of 1774, published as “A Summary View of the Rights of British America,” Jefferson charged the British crown with having prevented the colonies from abolishing slavery in the interests of avarice and greed:

The abolition of domestic slavery is the great object of desire of these colonies, where it was, unhappily, introduced in their infant state. But previous to the enfranchisement of the slaves we have, it is necessary to exclude all further importations from Africa. Yet our repeated efforts to effect this by prohibition, and by imposing duties which might amount to a prohibition, have been hitherto defeated by his Majesty’s negative.

In his autobiography, Jefferson declared, “Nothing is more certainly written in the book of fate than that these people are to be free.”

In 1784, when an effort was unsuccessfully made to exclude slavery from the Northwest Territory, Jefferson was one of its leading supporters. Finally, with the passage of the Northwest Ordinance in 1787, slavery was indeed excluded from these territories—a further step along the path to its final elimination and a clear indication of the view of slavery which predominated among the Framers of the Constitution.

In “Notes on the State of Virginia,” Jefferson wrote:

The whole commerce between master and slave is a perpetual exercise of the most boisterous passions, the most unremitting despotism on the one part, and degrading submission on the other. Our children see this, and learn to imitate it, for man is an imitative animal … With the morals of the people their industry also is destroyed. … And can the liberties of a nation be thought secure when we have removed their only firm basis, a conviction in the minds of the people that these liberties are the gift of God? That they are not to be violated but with his wrath?

In the end, while many criticized the Framers of the Constitution for not eliminating the slave trade immediately, others understood that they had set in motion an opposition to slavery that would bear fruit in the future.

When the Constitutional Convention met, slavery was legal throughout the world. Not a single country at that time had outlawed slavery. Many of the Framers wanted to eliminate slavery from the beginning.

Benjamin Franklin and Alexander Hamilton were ardent abolitionists. John Jay, who would become the first chief justice of the United States, was president of the New York Anti-Slavery Society. Founding Fathers Rufus King and Gouverneur Morris were in the forefront of the opposition to slavery and the slave trade.

In the end, to keep South Carolina and Georgia in the Union, compromises were made. Still, Founding Father Oliver Ellsworth of Connecticut declared, “Slavery, in time, will not be a speck in our country.”

Jefferson is a complex figure whose contribution to America’s creation and to American freedom is notable. He understood the evils of slavery, yet, being a man of his time and place, he did not separate himself from it.

To ignore his extraordinary achievements and focus only upon his shortcomings, as his critics now do, is to be guilty of what the Quaker theologian Elton Trueblood called “the sin of contemporaneity”—finding men and women of the past guilty of not holding the values of our contemporary society.

Sadly, from the beginning of recorded history until the 19th century, slavery existed in every historical period and with every race—in Ancient Greece and Rome and in Biblical times. The teachings of the Hebrew Bible and the Apostle Paul and the Patristic Fathers all supported the idea of slavery.

The current assault on Jefferson tells us more about the lack of historical perspective of his detractors than it does about Jefferson himself, a flawed but extraordinary creator of the very idea of America.