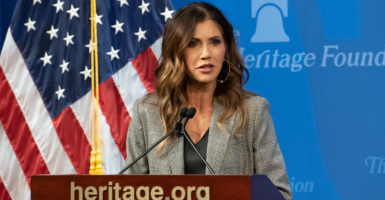 After Noem was elected governor in 2018, she said she provided training for school board members in her state to help them understand the significance of their decisions.

“Many of them, when they come in, it may be a volunteer position in some of these small school districts, or something that they’re not necessarily recognizing the authority that they have,” she said, adding:

By training them so that they actually know the power of the decisions that they make, they’re not subjected to just the experience and knowledge of the administrators that are running the building.

The first-term governor stressed the importance of making school board members aware that they do not have to accept funding from the federal government, adding that the “federal government is very quick to dictate to our school districts by using money as an incentive.”

It’s so interesting to me that they’re pushing their activist agenda so hard they’re willing to create an unfair situation for women and take food away from children.

It’s shocking to me that they think that works politically, or even in day-to-day life, but that’s how extreme the left is right now.

Earlier in her conversation with Heritage Foundation President Kevin Roberts, Noem applauded Virginia Gov. Glenn Youngkin for his focus on education and children. The issue of education was pivotal in last November’s gubernatorial race in Virginia.

A Washington Post-Schar School of Policy and Government poll conducted in October found that education was the top priority for voters, replacing the economy as No. 1 from the prior month. Education as an issue rose 9 percentage points in importance from September to October, according to the poll.

“When I first became governor, one of the very first bills that I ran that first legislative session was to put more civics and history in our classrooms, especially at the high school level. That session, my Republicans killed it because they thought it wasn’t necessary,” Noem said, noting the lawmakers thought it would be “too hard” for the schools’ administration to find a new curriculum and for the teachers to teach the new curriculum.

“Now, look, just two years later, overwhelmingly what’s sweeping across the country is the need for more civics and history in our classrooms,” she said. “Of course, I’ve gotten their support now, and we’ve done some great things in South Dakota.”

The handling of the COVID-19 pandemic also had a significant adverse impact on education across the country, Noem said. While education for South Dakota students was virtual through the end of the 2019-2020 school year, most schools were open in the fall of 2020 and all were reportedly back in person by the end of the 2020-2021 school year, according to Ballotpedia.

“[Dr. Fauci] destroyed kids’ education. We have kids that forever will struggle because they’ve been forced to wear masks. That has hurt their development,” Noem said. “It is a tragedy what that man was allowed to do to the United States of America.”

Noem called Fauci, director of the National Institute of Allergy and Infectious Diseases, a “liar” and said she saw the writing on the wall from the start of the pandemic that he would push a political agenda.

“I saw him for years running around with [House Speaker Nancy] Pelosi and the liberals. So, from the very beginning, when he was given a platform to be an expert in this area, you know, the warning signs that he would turn this into a political agenda were there,” she said.

“Fauci’s a liar. He was lying from the very beginning. He knew he wasn’t following the data and the science. He had an agenda from Day One,” she said.

Fauci and the National Institute of Allergy and Infectious Diseases did not respond to a request for a comment from The Daily Signal.