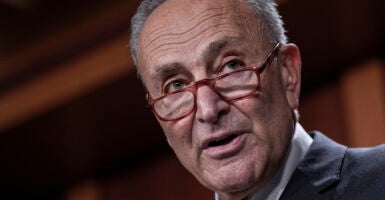 The so-called Inflation Reduction Act won’t live up to its promises: It will increase the price of energy and make us less energy secure, and it won’t have any impact on the climate. Pictured: Senate Majority Leader Chuck Schumer, D-N.Y., speaks to reporters at the U.S. Capitol on July 28, 2022, about his recent agreement with Sen. Joe Manchin, D-W.Va., on the Inflation Reduction Act of 2022. (Photo: Drew Angerer/Getty Images)

Make no mistake, the so-called Inflation Reduction Act unveiled Wednesday by Senate Majority Leader Chuck Schumer, D-N.Y., and Sen. Joe Manchin, D-W.Va., will do nothing that its supporters state—in fact, it will do quite the opposite.

If passed, the act will increase the prices that Americans pay for energy, make the United States less energy secure, and do absolutely nothing for the environment. Perhaps more insidious, it will hurt Americans who live in coal-rich states, like Manchin’s West Virginia, the most.

Focusing on just the energy and climate section of the act, the top-line numbers are staggering. Like Oprah Winfrey handing out gifts to her studio audience, the act would use $369 billion in taxpayer funding to dole out favors to every special interest in Washington, D.C.

Doors and windows—you get 10 years of subsidies!

Transportation—you get tens of billions of dollars!

The list goes on for hundreds of pages and details a combination of tax credits, subsidies, and regulations for the energy choices preferred by the D.C. elite, such as wind and solar, while increasing the costs to access more reliable, more abundant energy sources like gas and oil on federal lands.

The entire bill is predicated on misperceptions (or misrepresentations) about energy markets. Not only does the act’s energy section commence with the extension of energy tax credits for technologies that we are continuously told are already competitive, but it also dictates a series of new labor and wage regulations. This is odd given how many times President Joe Biden tells us about the good-paying jobs his environmental agenda will create.

Both can’t be true. Either renewable energy is competitive and creates good, high-wage jobs—in which case the act is unnecessary—or we are being lied to, and the act is simply a cynical effort to line the pockets of special interests, empower Washington bureaucrats, and disempower American individuals and businesses in the name of advancing a leftist agenda.

All of this leads to less energy security, and here is why:

American energy consumers, i.e., families and businesses, value affordability and reliability in their energy choices. In a system of free enterprise, America’s energy companies compete for that business and put a premium on what consumers want. The result is America’s current system of energy production that, when allowed to operate with minimal government interference, powers the American economy with the affordable and reliable energy we all want.

The American free enterprise system will also yield the sorts of technological advances that Biden and his fellow Green New Dealers say they want. That’s because as Americans’ preferences shift, the market will respond with firms offering new products to meet that demand.

And while that new solar panel or electric vehicle might be more expensive at first, competitive pressures will force manufactures to develop new business practices and innovations to bring prices down. The result is more energy choices, lower energy prices, and a strong, more secure energy economy.

But the Inflation Reduction Act replaces this proven system with the historically disproven approach that empowers politicians and bureaucrats to attempt to control the economy through legislative fiat and financial bribery.

The problem is not just wasted taxpayer dollars but how these policies distort long-term investment decisions.

Over time, the market shifts from offering competitive products independently to offering costly and less reliable products that rely on taxpayer support.

This is not just theory. Despite decades of subsidies and government-sponsored publicity, wind and solar remain dependent on taxpayer support and government mandates.

Or consider the petroleum refining industry, which has lost significant production capacity in recent years. This isn’t because Americans no longer value affordable gasoline but because political leaders like Biden have mandated that refiners blend in ethanol and have stated repeatedly a desire to end the gas and oil industry.

Americans are now less secure because these policies are undermining the refining industry’s incentive to expand current capacity as well as invest in future capacity, which leaves America’s energy infrastructure unable to keep up with demand. The result is higher prices at the pump. The Schumer-Manchin-Biden act would make the situation worse with its massive biofuel subsidies.

According a summary of the act distributed by Senate Democrats, the bill would “reduce carbon emissions by roughly 40 percent by 2030.” My Heritage Foundation colleagues recently produced a study that looked at an eerily similar policy.

Using a clone of the model used by Biden’s Energy Information Administration, they analyzed the impact of reducing carbon dioxide emissions by 44% by 2030, and the results are staggering.

In summary, they found that such carbon dioxide reductions would cause annual average job losses of 1.2 million with peak annual job losses reaching 7.8 million. Add to that $7.7 trillion in lost economic growth. That’s an income loss of $87,000 per family of four—and an average increase in household electricity expenses of 23%.

Because the target of the Schumer-Manchin-Biden approach is carbon dioxide and coal, the negative impact would be exacerbated in states that rely heavily on consuming, extracting, or refining conventional fuels like oil, natural gas, and coal.

Consider West Virginia, which is not only the nation’s second-leading producer of coal but also gets 88% of its electricity from coal. It’s not hyperbolic to predict that the Schumer-Manchin-Biden plan would be devastating for the state.

Some might argue that the massive economic costs are worth it if we “save the planet.” But here is the thing: The planet is not in environmental peril. Even the U.N.’s Intergovernmental Panel on Climate Change downgraded its most extreme climate projections to a low likelihood in its most recent assessment.

Real-life numbers back this up with the death toll from climate-related disasters decreasing 96% over the past century. And even if that weren’t the case, this bill would do nothing to help.

In fact, eliminating all conventional fuel-based carbon dioxide emissions would have virtually no impact on global temperatures, even taking the assumptions of global-warming alarmists at face value (which we absolutely should not). Indeed, my Heritage colleague, Kevin Dayaratna, used the climate model developed by the National Center for Atmospheric Research to demonstrate this fact.

Every American should be very clear on what the so-called Inflation Reduction Act will and will not do. It will line the pockets of special interests, it will advance a radical leftist agenda, and it will make Americans poorer and give them fewer energy choices. And it won’t live up to its promises: It will not have any impact on the climate and it will not make Americans more energy secure.