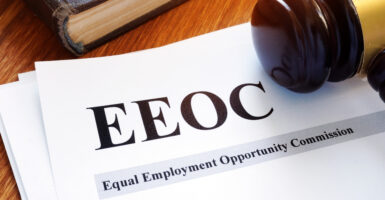 The federal government collected data on 100 million Americans from 70,000 employers to prioritize investigations for what a report calls “systemic” pay discrimination.

The government also is open to more expansive data collection in the future to address pay disparities.

“Is this going to be a smoking gun that definitively answers whether there is pay discrimination? That was never the intent, and I would be surprised if that was ever the result,” Charlotte A. Burrows, chairwoman of the Equal Employment Opportunity Commission, said Thursday during a press conference.

“We really can make a lot of use of it in deciding how to focus our resources,” said Burrows, a Democrat on the five-member commission since 2015 who was appointed chairwoman by President Joe Biden last year.

The EEOC completed its collection of 2017 and 2018 pay data under court order in 2020. That year, the agency contracted with the National Academies of Sciences, Engineering, and Medicine to study the pay data collected from private employers.

The national academies recommend the most effective uses for the pay data in a report released ahead of the press conference.

The report on the data collected for the EEOC also recommends pay data collection for the future.

But EEOC member Andrea Lucas, a Republican, said she is concerned that expanded data collection could become intrusive for employees. [Lucas is not related to The Daily Signal reporter who filed this news story.]

In a public statement, Lucas said:

That potential mandatory data collection by the EEOC could include: each individual employee’s race and ethnicity; sex, gender identity (including non-binary and transgender identification), and sexual orientation; age, disability status, and veteran status; occupation and individual-level job titles; individual-level pay data (including wages, tips, and non-taxable earnings, including earnings that contribute to medical insurance and retirement accounts, as well as hours worked, weeks worked, fulltime/part-time status, and overtime classification status); and other pay-affecting factors including education, job experience, and employment tenure.

“Not only could this lead to a significant invasion of privacy for individual employees by their employers,” the Republican EEOC member added, “but in some instances it may be in violation of the laws that the EEOC is charged with enforcing—all for data that only may be more useful.”

Employers gathered the data from employees, then provided it to the Equal Employment Opportunity Commission. The commission itself didn’t collect the data, Burrows stressed.

“I wouldn’t presume to speak for all private sector employees, but I want to be clear, we did not collect individualized, personal information—[such as] Joe Smith’s salary,” Burrow told The Daily Signal during the press conference, when asked about concerns with the handling of sensitive employee information.

However, Burrows, an attorney, said that direct collection of data on American workers by the government could be helpful for employers in the future.

“What we did is have the company provide it to us in a form that we thought would be a useful in a more aggregate way,” Burrows said, adding:

We did not collect individualized pay data with folks, although that is one of the things that the National Academy of Sciences has recognized would make such a collection—if we were to pursue it—less burdensome for the employers. I don’t have an opinion, and I’m not going to speak to where we might go in the future.

But Lucas argued that data collection still would require employers to collect sensitive information from employees.

“In pursuit of solving a speculative wage gap, the National Academies recommends an unprecedented, mandatory government collection of a detailed, individual snapshot of almost every private sector employee’s professional and personal life,” Lucas, also an attorney, said in her public statement. “The tangible—and intangible—costs of such a revised and aggressively expanded data collection could be severe.”

The National Academies of Sciences, Engineering, and Medicine concluded that collecting pay data is necessary to assess pay practices and differences in compensation by sex, race, and ethnicity.

The report says that the pay data would enable the Equal Employment Opportunity Commission to pursue a more data-driven approach to investigations and identify systemic discrimination.

The response rate from employers, meaning they submitted pay data to the government, was about 90%, officials said.

The report concludes that the EEOC should expand its data collections and recommended several improvements to make it easier for employers to produce the information.

The report also notes that data collection was “not well suited to measure pay equity by EEOC or by employers.”

But nevertheless, the report calls for the agency to double down on data collection, Lucas said.

“In other words, the collection was a failure,” the Republican commissioner said. “The report identified significant issues not only with the data collection process but also the reliability and accuracy of the data collected by the EEOC, issues rendering the data practically useless.”

The initial data collection cost companies more than half a billion dollars, she said, and a subsequent expansion would likely be more costly:

Before the EEOC gambles on a potentially billion-dollar burden on our nation’s private employers, and incentivizes the intrusive collection of sensitive information from employees, at a minimum the agency must undertake a formal notice and comment rulemaking and a public hearing to ensure robust public comment and input.

The report identifies unnamed Silicon Valley tech companies that have pay disparities based on race and gender.