The ‘Handshake’ Photo Taken Down at a Congressional Hearing 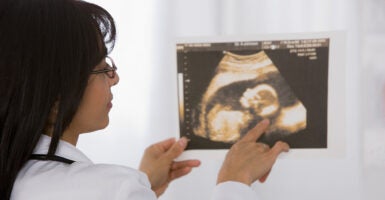 The chairwoman conducting a congressional hearing on abortion interrupted it to block a congressman’s attempt to present a photo of a tiny human hand extending through a cut in his mother's uterus and grasping a surgeon's finger during the operation.(Photo illustration: Klaus Tiedge/Getty Images)

A congressional hearing on Tuesday was suddenly and dramatically interrupted—by the chairwoman conducting it.

Her aim: Abort a Republican congressman’s attempt to present the very first photo of a person who is now 22 years old.

The scene was the House subcommittee on oversight and investigations. The title of the hearing: “Roe Reversal: The Impacts of Taking Away the Constitutional Right to an Abortion.”

Rep. Gary Palmer, R-Ala., began to ask a question of Dr. Christina Francis, the CEO-elect of the American Association of Pro-Life Obstetricians and Gynecologists.

“I want to show a poster,” Palmer said to Francis, as a staffer behind him began to hold up a photograph. “This is world-renown. It has gone—”

A gavel slammed down ferociously at the front of the hearing room.

” … on all types of magazines—” Palmer tried to continue.

“The gentleman will suspend, and the staff will take down that picture,” declared Chairwoman Diana DeGette, D-Colo.

“In this committee,” she declared, “we admit documents and photographs on unanimous consent bases, and this has not been—”

“I am not surprised,” Palmer responded.

“That’s the ruling of the chair,” said DeGette. “The gentlemen is recognized.”

“I am not surprised at all that you would not want to show this photo of an in-utero surgery in which the child being operated on grasps the finger of the doctor doing the surgery. That picture was taken in 1999. And—”

“Having not seen the photo, I cannot comment as to what it is,” DeGette said. “The gentlemen decided not to share it with the majority.”

And DeGette, obviously, had decided not to let her subcommittee be used as a venue to share it with the world.

“OK,” Palmer said to DeGette. “But the individual in the photo is now 22 years old. His name is Sam.”

A quite different scene—involving the same photograph—had unfolded in a hearing 19 years ago in the Senate subcommittee on science, technology, and space.

On Sept. 25, 2003, the mother and father of the baby who underwent the in-utero surgery testified along with the photographer who had been hired by USA Today to take photos at that surgery.

“During the hearing today, I would like to examine some of the most recent advances in the fields in-utero surgery and fetal medicine,” then-Sen. Sam Brownback, R-Kan., said at the beginning of the hearing.

“By the 15th week of my pregnancy, our unborn son was diagnosed with spina bifida,” Julie Armas, the mother, testified at the hearing.

“In light of this grim diagnosis, we were told that at least half of all babies with spina bifida are aborted,” she said. “But abortion was never an option for us.”

“After much prayer and support from family and friends, Samuel and I had maternal fetal surgery at Vanderbilt on Aug. 19, 1999,” she said. “I was 21 weeks pregnant, and he weighed about a pound.”

Michael Clancy, the photographer, explained to the subcommittee why he was in the surgery that day and what he photographed there.

“As a veteran photojournalist in Nashville, Tennessee, I was hired by USA Today to photograph a spina bifida corrective surgery procedure,” he said.

“The entire procedure would take place within the uterus, and no part of the child was to breach the surgical opening,” Clancy told the subcommittee.

“When it was over, the surgical team breathed a sigh of relief, as did I,” he said.

“As the doctor asked me what speed of film I was using,” he continued, “out of the corner of my eye I saw the uterus shake, but no one’s hands were near it.

“It was shaking from within,” he said.

“Suddenly, an entire arm thrust out of the opening and pulled back, until just the little hand was showing,” he said.

“The doctor reached over and lifted the hand, which reacted and squeezed the doctor’s finger,” Clancy told the subcommittee.

“As if testing for strength, the doctor shook the tiny fist. I took the picture,” Clancy said.

“It was 10 days before I knew if the picture was even in focus,” said Clancy. “To ensure no digital manipulation of images before they see them, USA Today requires that film be submitted unprocessed.

“When the photo editor finally phoned me,” Clancy told the subcommittee, “he said, ‘It’s the most incredible picture I’ve ever seen.’”

The photo published in the committee’s report on this hearing—published by the U.S. Government Printing Office—shows a tiny human hand extending through a cut in the mother’s uterus and seemingly grasping the gloved finger of a surgeon.

In a May 2, 2000, story in USA Today, that surgeon, Dr. Joseph Bruner, described the incident from a different perspective.

“Some opponents of abortion have claimed that the baby reached through the womb and grabbed the doctor’s hand,” USA Today reported. “Not true, Bruner says.”

“The baby did not reach out,” Bruner told USA Today. “The baby was anesthetized. The baby was not aware of what was going on.”

“It was after the spine had been repaired but before the amniotic fluid was returned to the womb that Bruner lifted Samuel’s hand and the picture was taken,” USA Today reported. “Bruner says he saw the hand ‘sort of pop up in the incision’ on the womb, and he ‘reached over and picked it up.’”

“Why did I pick up the hand?” Bruner said to USA Today. “I have no idea why I did it. I looked and I saw this hand, and I guess that to me it was just a very human thing to do to reach and shake somebody’s hand.”

More than two decades later, DeGette refused to let a photo of this moment be displayed at a hearing about abortion.