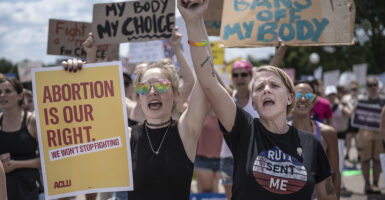 In the wake of Roe v. Wade’s demise, Joe Biden has attempted a flurry of pro-abortion initiatives. But the Constitution limits what the president can do. Pictured: Pro-abortion protesters Sunday at the capitol in St. Paul, Minnesota, call on lawmakers to make the state a leader in abortion access after the Supreme Court overturned Roe v. Wade. (Photo: Jerry Holt, Star Tribune/Getty Images)

In the wake of Roe v. Wade’s demise, after originalism prevailed and the Supreme Court recognized in last month’s Dobbs v. Jackson Women’s Health Organization case that indeed the Constitution, American history, and tradition do not support a right to abortion, Washington’s party in power has advanced a flurry of pro-abortion initiatives.

But in the shadow of looming midterm elections, the pace has proven too slow for many frustrated progressives, who also see the Constitution’s limitations on executive power as an unwelcome boundary on the administration’s ability to secure unfettered abortion access for women.

The first of these pro-abortion initiatives was the president’s executive order, “Protecting Access to Reproductive Healthcare Services,” issued July 8. The order was in keeping with a favored tactic of his administration: While Biden once stated that overuse of executive orders was the purview of dictators, he had already issued more of them in the first 100 days of his presidency than his predecessor, Donald Trump.

In the July 8 order, Biden directed the Department of Health and Human Services to take additional steps to expand access to medication abortion (the “abortion pill”), “protect” access to contraception, and ensure patients could obtain emergency medical care. While abortion supporters were likely gratified by the fact that the president was doing somethingrelative to their demands for increased abortion access, the executive order did nothing more than tell federal agency secretaries to follow the law that already exists.

The order also directed several federal agencies to better protect patient privacy under the Health Insurance Portability and Accountability Act, or HIPAA, amid concerns that digital information could put some women at risk in states that have already outlawed abortion following the Dobbs decision. The Department of Health and Human Services subsequently issued guidance clarifying existing privacy rights and obligations and saying that medical providers are not required to disclose private medical information to third parties except in certain limited circumstances.

Again, the guidance stated the obvious and that which was already covered by existing law: HIPAA-covered entities and business associates can only use and disclose personal health information in certain limited instances (for example, for law enforcement purposes) and only as expressly permitted or required by the act.

The department has also released guidance on physician rights and responsibilities under the Emergency Medical Treatment and Active Labor Act. EMTALA is a 30-year-old federal law that protects from legal action those providers who exercise clinical judgment and take action to provide “stabilizing” treatment to pregnant patients who are experiencing medical emergencies.

HHS Secretary Xavier Becerra has stated that EMTALA would protect physicians and hospitals who perform emergency abortions if the life or health of the mother is at stake, regardless of whether any abortion restrictions in the state where they occur contain a life-of-the-mother exemption.

But Becerra’s interpretation of EMTALA is overly broad. EMTALA is silent on the issue of abortion and is designed to ensure that pregnant women cannot be denied emergency medical care only due to their inability to afford it. Some provisions of EMTALA, in fact, acknowledge that medical treatment might be necessary to protect the life of an unborn child.

As is typical of this administration, the power of the purse has been turned against noncompliant individuals: Any hospital found to be in violation of the statute could lose its Medicare and Medicaid provider agreements and could face civil penalties of up to nearly $120,000.

There was also additional guidance from HHS stating that pharmacists may not discriminate against pharmacy customers “with regard to supplying medications; making determinations regarding the suitability of a prescribed medication for a patient; or advising patients about medications and how to take them”—an apparent effort to shore up access to abortifacients (abortion-inducing medications) post Dobbs.

Additionally, the Department of Justice’s Reproductive Rights Task Force, which was convened to “monitor and evaluate” state and local legislation restricting access to abortion, is yet another effort to batten down the hatches after the fall of Roe.

In all, these efforts represent a panicked administration’s efforts to throw everything at the wall in the hopes something sticks. As Becerra remarked, “There is no magic bullet, but if there is something we can do, we will find it and we will do it at HHS.”

Progressives seem largely unsatisfied by the lack of breadth of the efforts and lagging pace they perceive from the White House in responding to threats to abortion access. Among other radical ideas, they want to have abortions available to the public on federal lands and military bases and have pushed for the expansion of the number of justices on the Supreme Court to water down the conservative justices’ votes—but the White House has stated both approaches are off the table.

In short, the administration is scrambling. Recognizing the constitutional limitations on his power—including his inability to usurp the role of Congress to make law—and the small congressional majorities his party holds, the president has called on Democrats to vote in November as the best answer.

A White House official recently said, “The President is being straight with the American people, taking major actions under executive authority as he fights this extreme decision very hard, but being clear and honest that only Congress can fix the situation.”

While the White House’s piecemeal approach to securing further abortion access might be unsatisfactory for many of its liberal allies, that approach illustrates the sometimes messy nature of democracy when the issue of abortion is, as Justice Samuel Alito wrote in Dobbs, “returned to the people and their elected representatives.”

It seems many progressive Democrats dislike this democratic outcome. “We can’t just tell people, ‘Well, just vote—vote your problems away,’” Rep. Cori Bush, D-Mo., told the Washington Post. “Because they’re looking at us and saying, ‘Well, we already voted for you.’”

If the president’s predicament of limited power to secure unfettered abortion has any bright side for Democrats, it’s that he has been able to use the Dobbs decision to galvanize his base before the midterm elections. Democrats became activated after the draft Dobbs opinion was leaked, weeks before the Supreme Court finally handed down its decision to strike down Roe v. Wade.

The Democratic Governors Association has piled on and launched a new fund to elect governors in states where they can have the biggest impact on abortion access. The Democratic National Committee has joined the fight and released a digital ad campaign highlighting Republicans’ plans to further limit abortion in the wake of the Supreme Court’s opinion. In the one week immediately following the Supreme Court’s decision alone, Democrats and Democrat-aligned groups raised a whopping $80 million.

As for whether the proponents of life will be similarly energized going into the midterms?

We can only hope.