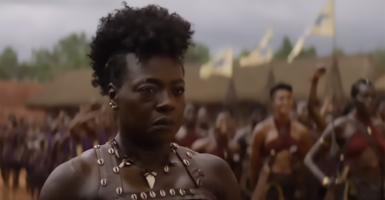 The upcoming movie "The Woman King" looks primed to sanitize the history of a brutal African kingdom based solely on the fact it had black, female soldiers. Pictured: The trailer for the film features Viola Davis, who stars as General Nanisca, leader of an all-female band of warriors. (Photo: Sony Pictures Entertainment)

The left’s obsession with centering everything on race and sex has reached a new and despicable low with an upcoming movie called “The Woman King.”

The “historical epic film” centers around the real African kingdom of Dahomey, which existed during the Scramble for Africa in the age of empires, around 1800 to 1904.

Viola Davis plays General Nanisca, leader of an all-female band of warriors known as the Dahomey Amazons, as she struggles against European attempts to conquer the kingdom.

Except for the horrific reality of how the kingdom of Dahomey treated its neighbors on the African continent.

The kingdom built its legacy on conquest, waging endless wars against those neighbors.

Dahomey had to field the anomalous Amazonian army not because the kingdom had modern sensibilities, but because so many of its men were slaughtered in pursuit of expansion that it was forced to conscript women.

On top of that, the kingdom built its economy on slavery. Yes, contrary to what the radical left tries to ignore, Africans were just as willing to participate in the slave trade as Europeans were.

Prior to Europe’s banning the slave trade, Dahomey routinely would trade men, women, and children from neighboring tribes to whites in exchange for money and other goods. Worse still, the slaves who remained in Dahomey faced horrific conditions and often were sacrificed to the kingdom’s gods.

Dahomey and slavery were so intertwined, it was Europeans who had to force the kingdom to stop.

In his book “The Fortunes of Africa,” historian Martin Meredith says that King Ghezo of Dahomey told British diplomats who attempted to convince him to stop enslaving and sacrificing people:

The slave trade has been the ruling principle of my people. It is the source of their glory and wealth. Their songs celebrate their victories and the mother lulls the child to sleep with notes of triumph over an enemy reduced to slavery.

Ghezo makes an appearance in the movie, played by “Star Wars” lead John Boyega. His depiction in the film makes Ghezo sound less like a bloodthirsty tyrant and more like a concerned monarch worried about the fate of his continent.

And if the trailer is any indication, this movie is going to push an ahistorical narrative of blameless Africans fighting against evil European colonizers.

“An evil is coming that threatens our kingdom,” says Boyega/Ghezo as the movie’s trailer begins and the camera pans to a shot of a foppish looking white man.

Then, Davis/Nanisca says: “The Europeans wish to conquer us. They will not stop until the whole of Africa is theirs. We must fight back. For our people.”

It’s a a nauseating mix of “Black Panther” and Wakanda-inspired black supremacy with a heaping helping of #girlboss energy.

Leftist rags already have primed the moviegoing masses to view this film as a great triumph for identity politics.

“Viola Davis Leads Brave Warriors Into Battle in ‘The Woman King’ Trailer,” reads a headline from The Hollywood Reporter, while HuffPost coos that we should all “Bow Down to Viola Davis.”

There’s a tendency from those on the radical left to lionize people simply for their immutable characteristics. Blacks, trans people, and women receive accolades simply for existing, and the left heaps favor on the holy identity trifecta: the black trans woman.

Although there is no evidence to suggest any men slipped into the ranks of the Dahomey Amazons, the film hits two of the three major identity groups. That the story features black women is apparently worth glorifying slave owners for.

The weirdest thing about this controversy surrounding the trailer is that the story of Dahomey is a genuinely interesting historical narrative.

The story of an all-female army led by a corrupt king who funds his war machine with the blood money from selling his neighbors into slavery would enrapture audiences.

But the left just can’t help itself. Instead of that story, audiences likely will be subjected to two hours of “Yass Queen Slay” and pithy Black Lives Matter race essentialism.

Maybe I’m all wrong and this movie will dive into the scourge that the Kingdom of Dahomey represented in real life. But in our society shaped and molded by the left, where women and blacks often are depicted as blameless innocents only to be acted upon by evil white men, I’m not getting my hopes up.

The human experience is shaped by mankind’s capacity for great evil or great good.

To reduce history to a simple narrative of white vs. black and man vs. woman cheapens the stories of those who came before us.

But that’s what we’ve come to expect of the radical left: a cheap veneer of progress on racial animus.

“The Woman King,” set for release Sept. 16, looks to be more of the same racist garbage we’ve seen from the left before.