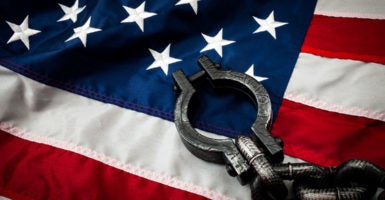 Thomas L. Krannawitter, Ph.D., a former professor, is co-founder of The Vino & Veritas Society, which is devoted to forming a Declaration of Independence culture in America. His many books include “Vindicating Lincoln” (2008), which was featured by the History Book Club and endorsed by the Abraham Lincoln Bicentennial Commission.

This Independence Day, more than any in living memory, it is vitally important that we reflect upon that greatest of all anti-slavery documents, the Declaration of Independence.

That document in turn launched the greatest abolitionist movement in human history: the United States of America.

We need only remember. And we should. It might be the only thing that prevents our country from further descent into violent chaos and the tyranny that typically follows.

Slavery is old. Slavery is older than human history, stretching back thousands of years to prehistoric times, before written historical records were kept.

Slavery has taken different forms among different people in different places around the globe, existing at one time or another—often for long periods of time—on every continent. Sometimes slavery has resulted from war, sometimes from religious persecution, sometimes from debt. Skin color has been important in some kinds of slavery, not so much in others.

When the sciences of shipbuilding and sailing became advanced enough for the reliable transportation of cargo, transoceanic trade in slaves became big business. It was the first time large numbers of slaves were sold and sent to distant lands, where they lived among people strikingly different from themselves.

Much ugliness and injustice dwells in the stories of the slave trade. It is heart-wrenching to learn human beings were treated as mere property, owned, controlled, used, bought and sold by others.

Amid the growth of the international slave trades—and in the context of the much older story of slavery itself—one group of people, far from being morally perfect, dared to declare a universal, true moral idea: that all men are created equal in terms of inalienable natural rights to life, liberty, and pursuit of happiness.

And these imperfect people set for themselves an ambitious goal for which there was no historical model: to create a new nation upon that idea.

The idea was enshrined forever in the America’s Declaration of Independence, and memorialized in Abraham Lincoln’s famous speech at the Gettysburg cemetery.

The American idea is perfect. Every human being, regardless of looks, language, or religious beliefs—whether rich or poor or in between—does possess, by nature, a morally rightful claim to his or her own freedom, to whatever he or she rightfully owns, equal to all other human beings.

We know that injustices are wrong—we know that slavery is wrong—precisely because we know that the American idea is right.

To live up to the American idea means abandoning slavery and all forms of tribalism in our public policies. No dividing citizens into groups, granting special government-dispersed powers, perks, favors, and crony subsidies to some while placing special burdens on others. No turning our backs on the natural rights of some. No stealing from others. No giving to the politically privileged and the politically preferred what they have not earned.

In the early decades of our republic, many Americans made big strides toward their goal. They treated slavery like a cancer: prohibiting the supply of slaves from Africa; prohibiting the spread of slavery to new federal territories; confining slavery to where it existed in the original states. Between the Declaration of Independence and 1800, a mere 24 years, half of those original states abolished domestic slavery.

Never before had a people declared their own independence upon a universal moral idea that applies to all human beings, everywhere, always. Never before had so much been done to constrain and eliminate slavery so quickly.

The American Founding was the greatest anti-slavery movement in human history, hands down.

That was not the end of the tragic story, of course. Changes in technology, new business opportunities, the importation of 19th-century European philosophy and science, and rigid biblical theologies sparked new economic interests in slavery while convincing Southern slavers that they were right.

Through a terrible, bloody Civil War, Americans abolished slavery by way of a constitutional amendment, only a few more than four score and seven years after the Declaration of Independence.

The American idea requires equal protection of the laws for the equal individual rights of each and every citizen. Period.

All we need do is live up to our own standard in our policies and our practices. All we have to do is remember and reflect upon the true ideas contained in our own Declaration of Independence.