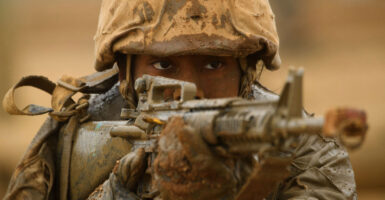 By forcing the Pentagon to purchase domestically produced components over those that are less expensive, "Buy American" legislation can significantly drive up the cost of arms and military materiel, resulting in service members—like this female Marine recruit training April 21, 2021, at Camp Pendleton in San Diego County, California—to get less of them. (Photo: Patrick Fallon/ AFP/Getty Images)

Congress is once again flirting with new “Buy American” legislation for defense programs. But underneath the patriotic cover of this legislation is an unexpected casualty: military readiness and capability.

Buy American legislation can be traced back to 1933, when Congress passed the Buy American Act, requiring that government acquisitions be entirely produced in the United States with at least 50% domestically produced components.

Norcross, a long-standing champion of Buy American legislation, has been attempting since 2020 to implement increased domestic content requirements through the annual National Defense Authorization Act passed by Congress

Last year, Norcross’ amendment to the 2022 law would have required that all government acquisitions possess a 75% domestic component content by 2029, an increase from the current 55%.

Now, the New Jersey lawmaker is again trying to pass similar legislation through the 2023 National Defense Authorization Act, and his proposals have garnered support from the Biden administration.

Norcross’ efforts have been backed by the administration’s Made in America Office, which, soon after its creation, published a proposal suggesting that lawmakers increase the percentages of required domestic content for government purchases.

We can all agree that strong American businesses are a good thing. But broad Buy American policies don’t actually support American producers, and they hurt, rather than help, the nation’s military readiness and capability.

For starters, restrictions on foreign-made components couldn’t be enforced for the 26 countries that are already exempt from Buy American requirements. The U.S. has many trade agreements with other countries where both sides agree to treat each other’s goods as “domestically produced.” Congress can propose any number of changes to Buy American rules, but it has limited authority to change the international agreements that exempt those countries.

As a result, the latest Buy American proposals are (for the most part) just empty virtue signaling. This legislation would be unenforceable in other cases, too, as some goods such as antimony are simply not mined in the United States.

It would also drive up the cost of defense acquisition programs. In many cases, foreign-produced components cost less than their domestic counterparts.

By forcing the Department of Defense to purchase domestically produced components over those that are less expensive, Buy American legislation can significantly drive up the cost of arms and military materiel, resulting in service members getting less of them.

Given that President Joe Biden’s proposed defense budget for fiscal year 2023 already represents a real decrease from fiscal year 2022 due to out-of-control inflation, higher costs will only serve to limit how much the Pentagon will be able to purchase with its decreased budget.

After the Cold War ended with the collapse of the Soviet Union in 1991, defense spending decreased for a time. The number of major U.S. defense contractors decreased from 15 to five as large defense firms began to consolidate.

In doing so, many of today’s U.S. defense firms have become single-source suppliers for certain military goods and products.

Not only does this lead to increased risk for defense programs due to the possibility of single points of failure, but firms who hold monopolies over certain goods can charge higher prices.

Buy American legislation only serves to reinforce this tendency toward monopoly by cutting out overseas firms and granting large U.S.-based defense firms the leverage to charge ever higher prices.

Politicians absolutely should be concerned about defense items being manufactured in China or other nations hostile to U.S. interests and objectives. But instead of issuing blanket restrictions that affect both adversaries and allies alike, Congress and the administration should seek to use targeted restrictions to ensure that vital components are not being made in nations such as China, Russia, or North Korea.

Through responsible, targeted legislation, Congress and the administration can ensure the principles behind Buy American legislation while also building up the nation’s military readiness and capability.