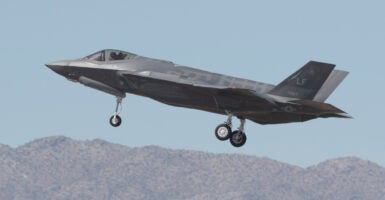 Weapons systems, such as the F-35 Lightning II fighter jet, seen here at Luke Air Force Base near Phoenix on March 17, 2018, require complex supply chains, with many firms and countries contributing to the final product. (Photo: Yichuan Cao/ NurPhoto/Getty Images)

In World War II, the United States became known as “the arsenal of democracy” and has filled that role ever since, with a robust defense industry sustaining a strong military.

But according to a new administration report, the U.S. defense industrial base faces threats at a time when the country can least afford them—challenges it will need to address, in part with the help of U.S. allies and partners.

Each year, the Department of Defense publishes an “Industrial Capabilities Report to Congress,” a sober analysis of the industrial base of prime contractors, subcontractors, and other firms that support America’s warfighting capabilities.

The latest report, published just last month, identifies a variety of problems facing defense sectors, such as dependence on foreign countries (particularly China), sole-source suppliers, and a shortage of skilled workers, to name a few.

Congressional leaders and the newly installed Biden administration should take note of the report’s focus on two key vulnerabilities: “human capital gaps” and “foreign dependency.” While every sector of the defense industrial base has its own set of issues, these two concerns cut across nearly every sector.

The U.S. skilled workforce to support the defense sectors is simply too small. This human capital gap is most evident in the STEM workforce available to defense sectors. U.S. universities are graduating a growing share of noncitizen holders of STEM degrees, some of whom may be ineligible for security clearances to work on defense programs.

According to the 2020 “Industrial Capabilities Report,” American students barely make up one-fifth of graduate students among U.S. universities in computer science and electrical engineering.

Moreover, China’s population is four times that of the U.S., but China has eight times the U.S.’ number of STEM graduates. With 67.4 million American STEM professionals compared with 78 million Chinese professionals in 2016, China has outpaced the U.S.

The “Industrial Capabilities Report” recognizes this trend, among others, as a contributor to lagging human capital that will limit the defense industrial base now and into the future.

The extremely complex weapons platforms of the U.S. armed services—the F-35 Joint Strike Fighter or the Virginia-class submarine, for example—require complex and deep supply chains, with many firms and countries contributing to final systems.

Some defense components, particularly those several tiers within the supply chain, are manufactured overseas, making U.S. defense programs reliant on foreign countries—some of which may not share U.S. interests.

For example, the report identifies semiconductors as an important concern for policymakers in this area. Semiconductors are key electronic components found in everything from smartphones to systems in defense technologies.

According to the “Industrial Capabilities Report,” the U.S. has only a 12% market share in the global semiconductor manufacturing market as it has continued losing ground to partners such as Taiwan and to potential threats such as China.

With the semiconductor and microelectronic sectors growing, the U.S. must identify and encourage friendly suppliers for these critical components of national security infrastructure.

When looking at this problem, however, it’s important to draw a distinction between foreign dependency and foreign vulnerability. Foreign dependency, although certainly an issue with adversarial countries such as China and Russia, is not necessarily cause for as much alarm as the fiscal 2020 report implies.

Allies play an important role in our defense supply chains, and when partner countries have healthy defense industries, the United States is more secure.

Allies that can maintain or expand key industries in friendly territory offer trusted suppliers for U.S. defense programs, especially when the United States might not be prepared to rebuild domestic capacity in those industries, a process called “reshoring.”

Policymakers and experts are already using this report to grapple with the challenges arising from foreign vulnerabilities, human capital gaps, and other concerns.

In a recent discussion on the report, former Deputy Secretary of Defense Robert Work addressed these issues, noting, “A bipartisan overemphasis on ‘buy America’ makes it much harder for us to source the best available technologies. It might come from Norway or South Korea or Japan or Germany.”

He concludes that taking a “narrow view of the U.S. industrial base” must be reframed by adopting a “broader view on competition with China” and working with U.S. allies on efforts to rebuild and develop key industries, such as microelectronics and semiconductors.

As the United States and the Defense Department continue to posture toward great power competition with China, evaluating each defense sector’s vulnerability, as the “Industrial Capabilities Report” does, is an important step in ensuring a resilient military.

Human capital shortfalls, foreign vulnerabilities, and other threats impact each level of the defense industrial base. We can mitigate those threats by coordinating with partner countries to both reshore and maintain key industries on domestic and friendly foreign soil.

The United States can continue carrying the mantle of the “arsenal of democracy,” but in the face of peer or near-peer threats such as Russia and China, our industrial base cannot support that mantle alone.