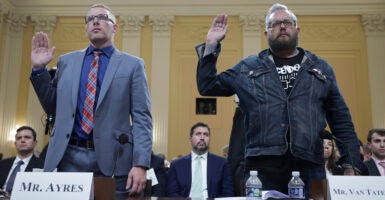 Stephen Ayres, left, who entered the U.S. Capitol illegally on Jan. 6, 2021, and Jason Van Tatenhove, right, who served as national spokesman for the Oath Keepers and as a close aide to Oath Keepers founder Stewart Rhodes, are sworn-in during the seventh hearing by the House Select Committee to Investigate the January 6th Attack on the U.S. Capitol in the Cannon House Office Building on July 12, 2022, in Washington, D.C. (Photo: Kevin Dietsch/Getty Images)

The House panel investigating last year’s Capitol riot argued during a hearing Tuesday that a tweet from then-President Donald Trump was largely responsible for rioters’ violent breach of the building.

The seven Democrats and two Republicans on the panel have said that Trump’s use of the phrase “Will be wild” in that tweet sent early Dec. 19, 2020, encouraged the violence that occurred several weeks later.

The House committee again made extensive use of video clips from its depositions of former Trump administration officials and advisers.

Two witnesses testified live before the panel, one of whom entered the Capitol that day and the other a former spokesman for the Oath Keepers militia group.

Here are four big takeaways from the seventh hearing this summer held by the House Select Committee to Investigate the January 6th Attack on the United States Capitol.

One of two live witnesses was Stephen Ayres, who last month pleaded guilty to a misdemeanor charge of disorderly conduct for illegally entering the Capitol on Jan. 6, 2021, as a joint session of Congress met to confirm the Electoral College tally that made Biden the next president.

The other witness was former Oath Keepers spokesman Jason Van Tatenhove, who previously had been a reporter who covered the militia.

Ayres was not a member of either the Oath Keepers or the Proud Boys, two groups that the select committee is focused on. Van Tatenhove, a Colorado resident, did not attend the Trump rally that day nor participate in the riot.

Ayres, an Ohio resident, said he left the Capitol only after Trump, in a tweeted video, told the rioters to go home. On that day, Ayres testified, he believed the outcome of the 2020 election—Trump’s loss to Joe Biden—could be reversed.

Rep. Liz Cheney, R-Wyo., asked what Ayres would have done if he had good reason to believe that Trump already knew he had really lost.

He later suggested that he thought Trump lied to supporters about the election being stolen.

“It makes me mad. I was hanging on every word he said,” Ayres said.

Van Tatenhove said there were several past occasions where Americans pointed firearms at federal agents.

He said more people could have died that day if matters had gotten worse, noting that someone built a gallows with a noose outside the Capitol.

Cries of “Hang Mike Pence” were heard that day because the then-vice president had not consented to Trump’s urging to challenge some states’ Electoral College votes that went to Biden.

“What else is he going to do if he got elected again?” Van Tatenhove said of Trump.

2. ‘Not an Impressionable Child’

Cheney, the committee’s vice chairwoman, insisted that Trump must have known that he lost the election to Biden, since Attorney General William Barr and other administration officials had concluded there was no evidence of enough fraud having occurred to affect the outcome.

“No rational or sane man in his position could disregard that information and reach the opposite conclusion,” Cheney said.

She said Trump should not blame the lawyers around him.

“President Trump is a 76-year-old man,” Cheney said. “He is not an impressionable child. Just like everyone else in our country, he is responsible for his own actions and his own choices.”

She said the evidence shows that Trump’s closest advisers were telling him that he was out of options to challenge results in some states.

“Dec. 14 was the day that the states certified their votes and sent them to Congress, and in my view that was the end of the matter,” Barr said regarding the Electoral College vote. “I thought this would lead inexorably to a new administration.”

In the clip of Deere, he said Trump disagreed with his view.

Two House Republicans blocked by House Speaker Nancy Pelosi, D-Calif., from serving on the committee were among those who criticized the panel’s conduct.

“The sham J6 Committee, Biden and the media ‘are colluding to keep more than 1,000 videotaped interviews and 25,000 documents secret from the public,’” Banks tweeted Tuesday afternoon.

Gingrich’s op-ed was published in The Epoch Times with a headline reading: “Trust the American People, Not the Jan. 6 Committee.”

In it, Gingrich criticized the select committee for showing cherry-picked aspects of video-recorded depositions that fit the panel’s narrative. He also called for the committee to make all the depositions public.

“Why won’t every Democrat condemn attacks on churches and pregnancy centers?” Jordan tweeted, referring to vandalism and violence since the Supreme Court overruled its 1973 Roe v. Wade decision and sent the issue of regulating abortion back to Americans and their state legislatures.

In a clip of his recorded deposition, Barr said that Trump floated the idea in December 2020 of having the Justice Department seize voting machines.

“The president said something like, ‘Some people say we could get to the bottom of this if the department seized the machines,” Barr said in the clip. “It was a typical way of raising a point. I said absolutely not. There is no probable cause. We’re not going to seize any machines. And that was that.”

“The specific plan was to name Sidney Powell as special counsel, the Trump lawyer who had spent the post-election period making outlandish claims about Venezuela and Chinese interference in the election,” Raskin said.

The committee played a video montage of various people being deposed regarding a heated meeting Dec. 18, 2020, in various White House locations that included then-Trump lawyers Powell and Rudy Giuliani as well as former national security adviser Michael Flynn and others who clashed with White House counsel Pat Cipollone and others on the White House legal team.

In the early hours of the next day, Trump tweeted an invitation to a rally in his support set for Jan. 6, ending with the words: “Will be wild.”

In one clip from his deposition, Cipollone said he believed that once the Electoral College voted on Dec. 14, 2020, all of Trump’s legal options were closed.

But Trump was frustrated with the White House lawyers, Giuliani said.

“You guys are not tough enough,” Giuliani recalled Trump saying.  “You’re a bunch of p—–s. Excuse the expression. But I’m almost certain that was the word that was used.”

Cipollone also said during the deposition that he told Trump that seizing voting machines “is a terrible idea.”

“I don’t even know why I need to tell you why that’s a bad idea,” Cipollone recalled saying.