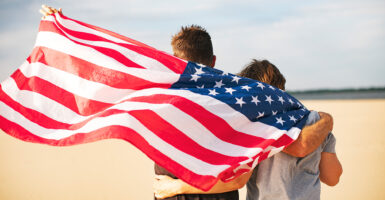 In spite of the negativity and controversy of recent months, a new poll shows Americans remain proud of their country. (Photo: JulPo/Getty Images)

A new poll finds that patriotism is alive and well among most Americans, with nearly 3 in 4 saying they are proud of their country despite divisive domestic issues and the findings of other recent surveys.

“Although national sentiments are far from uniform, our survey’s results display that most Americans, regardless of political affiliation, share feelings of patriotism and national pride,” a summary of the poll says.

The poll, conducted in May by FixUS, found that 72% of those surveyed agreed with the statement “I’m proud to be an American.” That number included 91% of Republicans surveyed and 62% of Democrats.

Also, 73% of those surveyed agreed that they would “prefer to live in the U.S. than in another country.”

The FixUS poll asked 2,000 participants a series of questions to determine the current climate of American patriotism. FixUS is part of the nonprofit, nonpartisan Committee for a Responsible Federal Budget.

Similarly, a Fox News poll of registered voters found that only 39% said they are “proud of the country today,” echoing a poll by The Economist and YouGov America finding that 40% considered themselves “very patriotic” and 53% agreed that Americans are becoming less patriotic.

Most participants in the FixUS poll agreed on fundamental ideals such as America being a land of opportunity, equality, justice, and limited government. Participants rated each ideal as “highly important” on a scale of 1 to 10, with 10 being “extremely important.”

Americans typically gave each ideal a rating over 8, the poll found, “with no notable differences by party.”

The poll also found that 85% said they agree that progress has been made to achieve these fundamental ideals and that it’s patriotic to criticize and strive to perfect the country.

One was “People who do not wholeheartedly support America should live somewhere else,” to which 59% of Republicans surveyed agreed and 63% of Democrats disagreed.

A total of 65% of Democrats and 23% of Republicans said they agreed with this statement: “For the most part, people who protest and demonstrate against U.S. policy are good, upstanding people and valued members of our society.”

Similarly, 94% of Republicans agreed that seeing the American flag flown or hearing the national anthem sung makes them feel good or very good, while only 49% of Democrats agreed.

Another large disparity between the two major parties was seen in response to the question of whether American life and culture has changed for better or worse since the 1950s.

Although 50% of Democrats said the nation’s culture has improved in the past 70 years, fully 75% of Republicans said it has deteriorated.

Although some findings are concerning and should be openly discussed, the overall findings should be encouraging, said Michael Murphy, chief of staff for the Committee for a Responsible Federal Budget.

“While it would be naïve to disregard the country’s deep divisions, it’s encouraging to discover that most Americans share fundamental beliefs about American values, history, and ideals,” Murphy said.

“A majority of Americans are patriots who value the American experiment and what it represents, and at a time when it has never been more important to put citizenship over partisanship, that’s a hopeful sign,” he said.

America, perhaps more than any nation, is founded on a set of political ideals. In the face of apparent polarization, we at FixUS wanted to discover whether the foundations of an American ‘nation’ remain. The answer delivered by the survey appears to be ‘yes,’ although a finer analysis also reveals a nation potentially at risk.