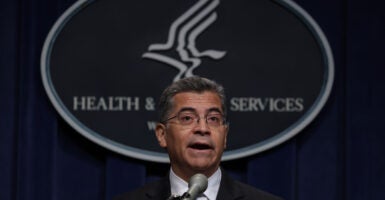 Secretary of Health and Human Services Xavier Becerra—seen here at a news conference Tuesday—wouldn't answer the question directly when asked at a May 4 Senate committee hearing, “In what case would it be inappropriate to perform irreversible sex-change surgery on kids?” (Photo: Alex Wong/Getty Images)

Now that the U.S. Supreme Court has overturned Roe v. Wade through its decision in Dobbs v. Jackson Women’s Health Organization, a renewed conversation about abortion is front and center all across the country.  And rightfully so, because states will now be forced to confront the question of whether or not they will stand for life.

While it’s important to ensure that life wins and abortion is forever in the history books, we must stand for life in another way as well: We need to help parents protect their children against the increased suicide rate among gender-confused young people due to cross-sex hormones and puberty blockers—euphemistically known as “gender-affirming care.”

We’ve already seen that President Joe Biden and his administration are on the warpath against parents’ right to protect their children.

The Justice Department recently sent a letter to all state attorneys general warning that they could be violating civil rights laws if their states keep minors from receiving that “gender-affirming care.”

In addition, at a May 4 hearing of the Senate Appropriations Committee, Sen. Mike Braun, R-Ind., asked Xavier Becerra, Biden’s secretary of health and human services, “In what case would it be inappropriate to perform irreversible sex-change surgery on kids?”

Becerra responded: “Those decisions are made by that individual, and in consultation with a physician and caregiver.”

And if you log on to the Department of Health and Human Services website and view the page dedicated to “gender-affirming care,” you find a word salad about how to support children struggling with gender dysphoria.

But one of the glaring omissions from the Biden administration’s fight to make cross-sex hormones and puberty blockers more accessible to children facing gender dysphoria is this: Parents are hardly mentioned.

So, how do they justify pushing these potentially harmful drugs on children without checking with parents? They claim there’s an increase in the suicide rate due to unchecked and unsupported depression.

But on a recent episode of the “Heritage Explains” podcast, Heritage Foundation senior research fellow Jay Greene explained how that devastating narrative completely undermines the basic rights of parents. (The Daily Signal is the news outlet of The Heritage Foundation.)

I think [parents are] being coerced into this process to a high level because they’re being told that if they don’t go along, their kids will kill themselves. It’s this emotional manipulation, it’s this extortion that is driving this way beyond where it would otherwise be.

But Greene’s groundbreaking research flips that narrative on its head, showing that easing a minor’s ability to go around their parents to access cross-sex interventions is actually associated with a significant increase in adolescent suicides.

“Rather than being protective against suicide, these drugs appear to be exacerbating young people committing suicide … and the increase is about 14% in annual suicide rates among young people,” he said.

Greene found that because that increase is happening largely in the states where it is easier for minors to access drugs without parental consent, laws must be passed to ensure kids are protected and parents’ rights are clearly defined.

If we empower families, we slow this whole thing down, and we let families figure it out. … And we have to help families do that on their own terms, in their own way, rather than hijack it from the parents and those families.

In a recent message to commemorate so-called Transgender Visibility Day, Biden talked about and encouraged parents and children who are struggling to ask for help.

Perhaps the best place to help is to end his administration’s push for “gender-affirming care,” and instead empower parents to seek the right answers for their family.

You can listen to or read the entire interview here.