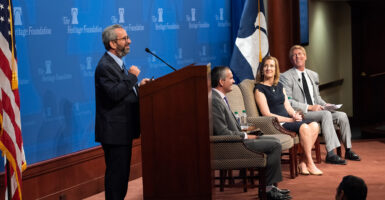 “Would you rather have a dead daughter or a living son?”

That’s the question that transgender activists and “gender-affirming” therapists and physicians often hold over parents’ heads when they refuse to allow their gender-dysphoric child to take experimental puberty blockers and long-term cross-sex hormones.

The study’s findings on suicide rates among gender-dysphoric youths run counter to the narrative of the transgender activists.

Jay Greene, a senior fellow at Heritage’s Center for Education Policy and author of the study, spoke of the imperative of investigating the effects of the widespread availability of puberty blockers. He called for clinical trials to determine whether puberty blockers and the long term use of cross-sex hormones are safe for children.

Jay Richards, the director of Heritage’s DeVos Center for Life, Religion, and Family, and Virginia Gentles, director of the Education Freedom Center at the Independent Women’s Forum, joined Greene on the panel, which was moderated by Ryan Anderson, president of the Ethics and Public Policy Center.

“We are in the middle of a rapid-onset gender-dysphoria pandemic,” Richards said, calling puberty blockers and cross-sex hormones the “pathway to sterilization.”

The speakers noted that transgender activists and physicians often play the suicide card to coerce parents into letting their child take these experimental drugs.

Gentles said that one of the most concerning aspects of the study’s findings is how the parents’ role in their child’s life is being usurped by medical, educational, and governmental institutions that actively conceal children’s health information from parents.

“Parents know that a risky regimen of puberty blockers, hormones, and surgeries won’t bring their children the peace and joy they so desperately crave,” Gentles said. She added that the individuals making experimental but irreversible medical decisions for children in place of parents have insufficient knowledge to intervene.

“The pernicious assumption behind this horrific question is that parents do not have the best interest of their children at heart and that the experts know better,” Gentles said. “Nothing is further from the truth.”

Heritage’s study contradicts the narrative that “gender-affirming care” is necessary and “lifesaving” in many circumstances, finding that “increasing minors’ access to cross-sex interventions is associated with a significant increase in the adolescent suicide rate.”

By encouraging minors to “pause” puberty, physicians and transgender activists are inevitably forcing those children to take cross-sex hormones and permanently mutilate their bodies, which only furthers gender dysphoria, hopelessness, and suicidal thoughts, the very things they claim to be working against.

The Heritage study found that the 33 states with legal provisions for children to receive health care without parental consent experienced 1.6 more suicides per 100,000 preadolescents and young adults ages 12 to 23 than the 17 states without such provisions. That represents a 14% increase in the average state suicide rate among the same ages from 1999 to 2020.

“States should also adopt parental bills of rights that affirm that parents have primary responsibility for their children’s education and health, and that require schools to receive permission from parents before administering health services to students, including medication and gender-related counseling to students under age 18,” the report says.

Richards noted that for children who express gender dysphoria, “watchful waiting” often appears to be the best solution. “For most children, puberty is a cure for gender dysphoria,” he said.

The speakers said Heritage’s study highlights not only the urgency for clinical studies on the long-term effects of puberty blockers and cross-sex hormones, but also the need for states’ recognition of parental involvement in medical decisions for minor children.

In addition, the speakers encouraged parents to fight for involvement in their children’s lives and speak up in the face of transgender activists’ intimidation and emotional manipulation.