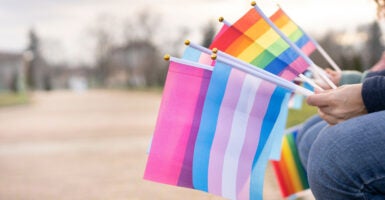 Finally, someone actually cares about the children.

The Florida Department of Health released new guidelines Wednesday about treating gender dysphoria in children. Unlike the recent guidance from the Biden administration, Florida’s guidance doesn’t promote aggressive medical interventions for minors who are struggling with gender dysphoria.

Instead, the state’s guidance states:

• Social gender transition should not be a treatment option for children or adolescents.

• Anyone under 18 should not be prescribed puberty blockers or hormone therapy.

• Gender reassignment surgery should not be a treatment option for children or adolescents.

In other words, let’s not saddle minors with life-altering changes (now dubbed “gender-affirming treatment” by the politically correct) when they are far too young to understand the decisions they are making.

But Florida’s commonsense approach has already been greeted with hysteria from leftists. “The demonization of life-saving, medically-necessary healthcare for transgender youth is dangerous and wrong,” tweets the ACLU.

“Once again, @GovRonDeSantis seeks to replace science and the safety of young people with political propaganda,” tweets Equality Florida.

Jay Brown, senior vice president of programs, research, and training at the Human Rights Campaign, snidely says in a statement: “It’s not surprising that Gov. [Ron] DeSantis is willing to deny the evidence to advance baseless attacks on transgender youth, but it is appalling.”

First off, social gender transitions—which involve asking people in a child’s life to affirm the new “gender” and allowing the child to dress and use the facilities of the opposite gender—are not some low-key way to test out a child’s gender identity. In her 2020 book “Irreversible Damage,” journalist Abigail Shrier writes:

A team of Dutch clinician-researchers who pioneered the use of puberty blockers found [that] … social transition is a significant intervention. In a 2011 journal article, they warned that early social transitions proved sticky. Given that girls who had been living as boys for years during childhood ‘experienced great trouble when they wanted to return to the female gender role,’ they cautioned, ‘We believe that parents and caregivers should fully realize the unpredictability of their child’s psychosexual outcome.’

Or: Duh, changing a child’s gendered references in all social settings has big ramifications. It’s easy to see that for a child it might be embarrassing or weird to go back on a gender change after all the initial hullabaloo.

Puberty blockers, too, have severe downsides. It turns out that halting the body’s natural progression has some consequences.

In a fact sheet accompanying the new guidelines, the Florida Department of Health notes: “In May of 2021, Sweden’s Karolinska Institute suspended the use of puberty blockers for those under the age of 18 due to the potentially irreversible consequences such as cardiovascular disease, osteoporosis, infertility, increased cancer risk, and thrombosis.”

Furthermore, the use of puberty blockers may hurt kids struggling with their gender identity. As my colleague Jay Richards, director of the DeVos Center at The Heritage Foundation, wrote for The Daily Signal earlier this month:

Most kids who suffer gender dysphoria will grow out of it. Some 61% to 98% of these kids will naturally reconcile with their sex after going through puberty. In many cases, puberty itself may be the cure for gender dysphoria.

“From studies of adults we know that the risks of cross-sex hormones include, but are not limited to, cardiac disease, high blood pressure, blood clots, strokes, diabetes, and cancers,” wrote Dr. Michelle Cretella, executive director of the American College of Pediatricians, in a 2017 article for The Daily Signal.

And, of course, sterilization itself is a real possibility after the use of hormone therapy.

Consider the case of Keira Bell, a British woman who received puberty blockers at 16 and testosterone at 17. As an adult, Bell changed her tune, taking legal action against the clinic that provided her treatment.

“I made a brash decision as a teenager, as a lot of teenagers do, trying to find confidence and happiness, except now the rest of my life will be negatively affected,” Bell said in a witness statement in 2020, per the BBC.

Bell, who also had a mastectomy at 20, added, “Transition was a very temporary, superficial fix for a very complex identity issue.”

In a 2021 article for Persuasion, she vividly described how puberty blockers affected her: “This so-called ‘pause’ put me into what felt like menopause, with hot flushes, night sweats, and brain fog. All this made it more difficult to think clearly about what I should do.”

When it came to cross-sex hormones, Bell also wrote that she did not truly understand as a teenager what she was consenting to:

Before beginning on testosterone, I was asked if I wanted children, or if I wanted to consider freezing my eggs because of the possibility that transition would make me infertile. As a teenager, I couldn’t imagine having kids, and the procedure wouldn’t have been covered by the NHS. I said I was fine if I couldn’t, and I didn’t need to freeze my eggs. But now as a young adult, I see that I didn’t truly understand back then the implications of infertility. Having children is a basic right, and I don’t know if that has been taken from me.

Do we really want more Keira Bells, haunted by the decisions they made as minors?

“Children experiencing gender dysphoria should be supported by family and seek counseling, not pushed into an irreversible decision before they reach 18,” Florida Surgeon General Joseph Ladapo said in a statement.

He’s exactly right. For children and teens struggling with gender dysphoria, the solution is counseling and support, not permanent changes whose effects will echo long into their adult lives.

Have an opinion about this article? To sound off, please email letters@DailySignal.com, and we’ll consider publishing your edited remarks in our regular “We Hear You” feature. Remember to include the url or headline of the article plus your name and town and/or state.