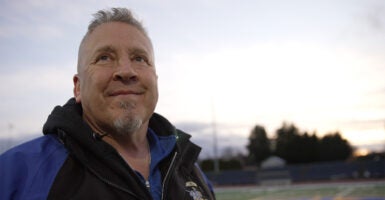 All football coach Joe Kennedy said he wanted from the Supreme Court was a ruling that allows him “to be a coach” and “thank God afterwards.” The Supreme Court gave him that ruling on Monday. (Photo: Mark Guiney/The Daily Signal)

It’s the end of the fourth quarter. There’s no time remaining on the clock. The final score: 6-3. Coach Joe Kennedy has won.

After a seven-year legal battle, the Supreme Court on Monday affirmed Kennedy’s right to take a knee in silent prayer in view of the public after high school football games.

“The Free Exercise and Free Speech Clauses of the First Amendment protect an individual engaging in a personal religious observance from government reprisal,” Justice Neil Gorsuch wrote in the 6-3 majority opinion, adding that the Constitution “neither mandates nor permits the government to suppress such religious expression.”

“Today, the Supreme Court reaffirmed a long-standing principle, correctly ruling that teachers and other school employees do not surrender their First Amendment rights at the schoolhouse gate,” Perry said of the 75-page opinion, adding that Kennedy’s prayers did not violate the Constitution’s establishment clause:

Coach Joe Kennedy’s quiet prayers after school football games—though visible to students—in no way represented a government establishment or endorsement of religion, contrary to the erroneous ruling from the U.S. Court of Appeals for the 9th Circuit.

After a seven-year battle to protect his right to religious expression, we’re pleased that coach Kennedy’s story has a happy ending—one that will set a precedent protecting the right of all Americans to practice their faith in the public square.

In 2015, Kennedy lost his job as an assistant football coach at Bremerton High School, about 30 miles west of Seattle, after taking a knee in prayer at the 50-yard line after games.

From the time he began coaching in 2008, Kennedy said, he made a covenant with God that he would thank him in prayer at the 50-yard line at the end of every game. No student or parent filed a formal complaint about the practice.

“The prayers, how long they were, I would say probably [they] averaged eight to 12 seconds,” Kennedy told The Daily Signal during a documentary interview.

“I mean, I’m not a great prayer of a guy,” Kennedy said. “It was really, ‘Thank you, God, for what these young men just did on the field, and thank you for letting me be a part of it.’”

When the Bremerton School District learned of Kennedy’s prayer routine, it told him he could no longer pray after games, even by himself, but Kennedy determined to keep the covenant he made with God.

The decision to continue after the school district told him to stop ultimately cost Kennedy his job. The football coach decided to fight back and filed a lawsuit. The Supreme Court heard arguments in Kennedy’s case April 25.

Justices Sonia Sotomayor, Stephen Breyer, and Elena Kagan, who make up the court’s liberal bloc, dissented from the majority opinion.

“This case is about whether a public school must permit a school official to kneel, bow his head, and say a prayer at the center of a school event,” Sotomayor wrote in the dissent. “The Constitution does not authorize, let alone require, public schools to embrace this conduct.”

But the court’s constitutionalist majority ruled that Kennedy had the right to practice his faith and pray on the field at the end of games.

“This is just so awesome,” Kennedy said in a written statement after the Supreme Court released its ruling, adding:

All I’ve ever wanted was to be back on the field with my guys. I am incredibly grateful to the Supreme Court, my fantastic legal team, and everyone who has supported us. I thank God for answering our prayers and sustaining my family through this long battle.

Kennedy previously told The Daily Signal that he would like to return to coaching at Bremerton High School if the Supreme Court ruled in his favor.

“This is a tremendous victory for coach Kennedy and religious liberty for all Americans,” said Kelly Shackelford, president, CEO, and chief counsel for First Liberty, the nonprofit legal organization that represented Kennedy.

“We are grateful that the Supreme Court recognized what the Constitution and law have always said: Americans are free to live out their faith in public,” Shackelford said.

From the very beginning of Kennedy’s legal fight, he said, all he wanted from the Supreme Court was a ruling that allows him “to be a coach” and “thank God afterwards.”

The justices gave Kennedy the ruling he prayed for.