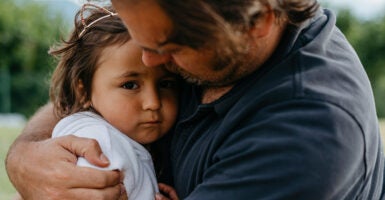 The breakdown of marriage and the fatherlessness crisis in our nation has clear consequences for the millions of children who grow up without witnessing real masculinity. (Photo illustration: Westend61/Getty Images)

Amongst the heated public rhetoric in the aftermath of the Uvalde school massacre, one tragic detail remains stubbornly paramount: the 18-year-old male shooter came from a broken family and was estranged from his father.

While it would certainly be unfair to pin all the blame for monstrous crimes committed by young men on the failings of their parents without considering other factors, there’s no denying what is arguably the central issue facing our nation (and what the Left persistently brushes aside): the breakdown of marriage and the children that grow up fatherless as a result. The Institute for Family Studies recently summed up the situation well: “The decline of marriage and the rise of fatherlessness in America remain at the center of some of the biggest problems facing the nation: crime and violence, school failure, deaths of despair, and children in poverty.”

American boys are at the center of this crisis: they grow up to commit crime, drop out of school, and take their own lives at far higher rates than women do. From 1960 to 1996, the percentage of boys who lived without their biological father almost doubled—from 17% to 32%. Today, the Institute for Family Studies reports that “an estimated 12 million boys are growing up in families without their biological father.”

The result of this implosion of intact families has been absolutely catastrophic on society, particularly on boys. A recent study conducted by the Institute for Family Studies found stark disparities among fatherless boys compared to their peers with fathers in college graduation (14% versus 35%), idleness at ages 25-29 (defined as not working and not looking for work—19% versus 11%), and who have been incarcerated by ages 15-19 (31% versus 21%) and ages 28-34 (21% versus 10%).

Common sense tells us why this is the case. As Adam B. Coleman has astutely observed, involved fathers provide critical guidance to their sons in a host of ways. In particular, they offer:

This fatherly nurturing is especially critical during a boy’s childhood and as they approach the teen years. As Family Research Council’s senior research fellow George Barna has written, “Because a worldview is fully developed before the age of 13, young children listen to and watch their parents for clues on how to live an appropriate and successful life.”

Scripture clearly stipulates why an engaged father is so critical during childhood: “Train up a child in the way he should go; even when he is old he will not depart from it” (Proverbs 22:6).

But as common sense also tells us, more responsible fathers aren’t going to just magically appear in our society, despite the best efforts of liberal masculinity lessons. Good fathers are formed through good marriages, just as our Creator designed it (Matthew 19:4-6). As the Institute for Family Studies notes, “[W]e must … revive our most fundamental bond, marriage, because it connects men to their sons in a way nothing else does.”

So how can we promote healthy marriages in order to forge the capable fathers that our country so desperately need? It’s a project all of us must be involved in, and it can take the form of doing practical things like those of us who are fathers talking honestly about fatherhood to our bachelor friends, inviting them into our family and community life, taking an active role in mentoring young men in our circles of influence, and yes, setting up eligible bachelors with eligible bachelorettes in our social circles.

In regard to the more immediate problem of the current crop of fatherless boys in our country, we can ask our representatives to look into passing bills that strengthen fatherhood and mentorship. There are also many practical ways we can minister to the fatherless. We can start by keeping our ears to the ground in our local communities so that we are ready to provide mentorship to the boy next door who we know is living in a single-parent household. This could simply involve inviting them over to play with our kids as often as we can so they can witness healthy Christian family life. Or we may consider getting involved in more formal after-school mentorship programs or other national mentorship programs.

While there are admittedly a multitude of factors that have led to the fatherhood crisis we find ourselves in here in America, one thing is certain: nothing will change unless we are willing to help cultivate genuine, godly masculinity and fatherhood in our own families and communities.