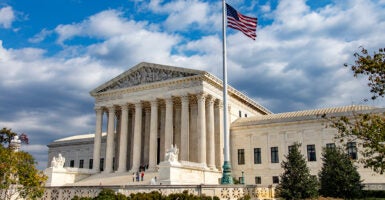 In the 2008 case of District of Columbia v. Heller, the Supreme Court recognized the individual right to gun ownership in the home. In the 2010 case of McDonald v. Chicago, it recognized that the right of individual gun ownership extended to states and local municipalities. This week, in New York State Rifle and Pistol Association v. Bruen, the court found that “New York’s proper-cause requirement violates the Fourteenth Amendment by preventing law-abiding citizens with ordinary self-defense needs from exercising their Second Amendment right to keep and bear arms in public for self-defense.”

Surely no one really believes that “bearing arms” in the Second Amendment was meant to restrict gun ownership to the home. But New York’s gun restrictions demand that a law-abiding citizen beg permission from government officials, and then overcome a slew of subjective and discretionary standards, before being able to exercise a constitutional right. There is no historical or legal support for such restrictions. They are plainly authoritarian.

As the court noted, there are still five states with “may-issue” gun carry laws that are similar to New York’s—California, Hawaii, Maryland, Massachusetts and New Jersey. All of them are now likely unconstitutional. And perhaps other gun restrictions will be challenged, as well.

Lower courts use a two-step framework when ruling on Second Amendment cases—the first step being the “text, history, and tradition” of gun laws and the Constitution, and the second being the government case for restrictions that relies on data and other concerns. “Despite the popularity of this two-step approach, it is one step too many,” Thomas wrote. If only the text and tradition of the Second Amendment matter, as Supreme Court has now found, the means-end scrutiny that props up so many needless gun restrictions should no longer stand.

The hysterical reaction to Bruen, now perfunctory for the contemporary left when it doesn’t get its way, merely reaffirms that Democrats make no real distinction between responsible legal gun ownership and criminality or between the Constitution and their capricious political positions.

A fearmongering Sen. Kirsten Gillibrand said the decision was “not just irresponsible but it is downright dangerous … This court has made it even easier for potentially dangerous people to carry concealed handguns in public spaces.”

House Speaker Nancy Pelosi claimed it was “unfathomable that, while families in Uvalde, Buffalo and countless other communities mourn their loved ones stolen by gun violence, a supermajority of the Supreme Court has chosen to endanger more American lives.” And so on.

The modern left doesn’t even bother pretending they believe the Supreme Court has a responsibility to act as a separate branch of government and adjudicate the constitutionality of law. Rather than even ostensibly offering legal reasons for their ire, Democrats simply demand the Supreme Court uphold public sentiment (or, rather what they claim is public sentiment), even though SCOTUS exists to ignore those pressures. The fact that that attitude has congealed as the norm in one of our major political parties does not bode well for the future of the Republic.

The New York permit case, of course, has absolutely nothing to do with mass shootings. Concealed carry permit holders aren’t mass shooters; they’re one of the most law-abiding groups of citizens in the country—less likely to abuse their guns than the police. There are numerous examples of shootings being stopped by gun owners. The notion that a murderer is going to apply for a license to carry out a killing spree is about as plausible as a murderer adhering to the restrictions of a gun-free zone.

Yet, someone unfamiliar with the case, which I imagine most people still are, might listen to Democrats and media and now be under the impression that every regulation governing concealed carry permits had been wiped out. The 43 states that have “shall-issue” laws, wherein states grant a permit to anyone who meets the legal requirements, aren’t affected by the ruling. There is no evidence that “may-issue” states, where officials have discretionary powers, keep anyone safer. There is plenty of evidence, however, that the contemporary left is at war with the Constitution.