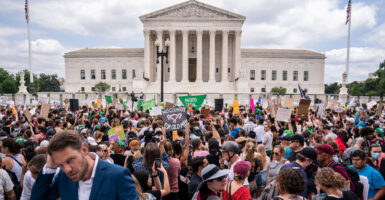 A journalist reports Friday near a crowd of abortion-rights activists in front of the Supreme Court Building after the court announced its ruling in the abortion case of Dobbs v. Jackson Women's Health Organization. (Photo: Nathan Howard/Getty Images)

Democratic lawmakers called for expanding the Supreme Court and abolishing the filibuster following a string of Supreme Court rulings not in their favor this week.

Many Democrats and liberals reacted with anger over the three rulings that covered the exclusion of religious schools from a taxpayer-funded voucher program, expanded gun rights involving concealed carry and overturned Roe v. Wade’s findings on abortion, sending the power to limit abortion rights back to the states.

“This far-right Supreme Court has ended reproductive freedom as we know it,” Democratic Rep. Mondaire Jones of New York said after the high court issued its ruling in Dobbs v. Jackson Women’s Health Organization. “We must expand the Court.”

“I ask my colleagues in the Senate what other judicial outrage must we endure from the illegitimate, far-right majority on the Supreme Court before we act?” Democratic Sen. Ed Markey of Massachusetts posted. “Fight back and expand the Court now.”

“The Court is out of touch,” Democratic Rep. Pramila Jayapal of Washington said. “We need to expand SCOTUS to restore legitimacy and public faith.”

“SCOTUS is corrupt,” liberal commentator Brian Tyler Cohen tweeted. “It’s no less partisan than Congress. Everyday we continue to PRETEND that that’s not the case or that there’s no recourse, we’re making the conscious decision to hand extremist Republicans these wins. There IS recourse. When we can, we have to expand the Court.”

The ruling in Carson v. Makin that struck down Maine’s exclusion of religious schools from a public school voucher program prompted one law professor to demand expansion of the Supreme Court.

Jones, Markey, Jayapal, Cohen and Quiles did not immediately respond to requests for comment from The Daily Caller News Foundation.